COLUMBIA, Mo. – With advances in meteorology technology, predicting storms is becoming easier than in the past. While most meteorology students learn about these new technologies in the classroom and don’t get a chance to use sophisticated equipment until they are on the job, a group of University of Missouri students were able to test a mobile weather tracking device, Doppler on Wheels (DOW), made famous by shows such as Discovery Channel’s Storm Chasers.

The DOW visiting MU is one of a fleet of radar trucks maintained by the Center for Severe Storm Research. Each radar truck is mounted with a Doppler weather radar dish. The fleet also consists of a support vehicle and three trucks that deploy instruments to track weather patterns in tornadoes and hurricanes. One of the radar trucks was brought to MU so that students could learn about the technology first-hand. 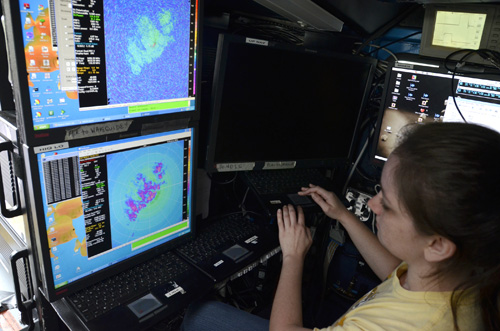 Kayla Flamm, a geography major and atmospheric sciences minor at MU, looks at the radar inside the DOW. The radar is scanning the reflectivity of the clouds, which shows how much moisture the clouds contain. Image credit: University of Missouri

“The opportunity that these students had with the DOW is something that most undergraduate students in the country don’t usually get,” said Neil Fox, associate professor of atmospheric sciences. “This DOW system is the same technology that scanned the most intense tornadic winds ever recorded in North America at Bridge Creek, Okla. on May 3, 1999. MU is lucky that we have access to these resources. Opportunities like this give our students a competitive edge when they enter the job market.”

The MU students have been using the DOW to map rainfall on the Hinkson Creek watershed in Columbia, Mo. Because the DOW is able to drive close to rain shafts, which are isolated columns of rain, the radar gives a more unobstructed view than stationary weather radars, allowing the students to get a precise location of rainfall. 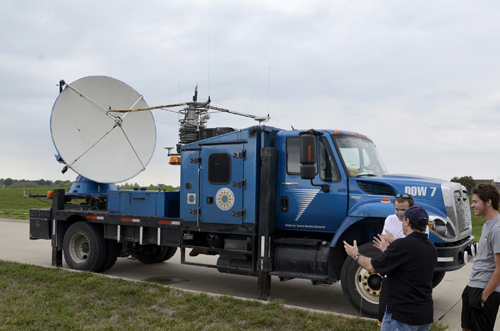 Many atmospheric science students came to explore the DOW vehicle while they had the opportunity. The truck will only remain at MU for three weeks. "Having a DOW in our possession is a big deal," Brett Williams, a atmospheric science major, said after his turn inside the truck. Image credit: University of Missouri

The data collected from the radar will be combined with information from other devices. Jason Hubbard, an assistant professor of forest hydrology and water quality at MU, will measure soil erosion and sediment transport on Hinkson Creek with these devices. With the results, the group hopes to gain a better understanding how rainfall impacts the creek and soil erosion.

“The DOW provides more detail than fixed radar sites in Kansas City and St. Louis,” said Nicole Hoban, an atmospheric science student that took part in the DOW project. “The data is live, and I can direct the DOW’s radar to individual rain shafts that could fall on important areas, something conventional radars can’t do. The DOW’s radar is unique in that it can scan vertically and detect very small raindrops in the air, allowing us the ability to gather even more raw data.” 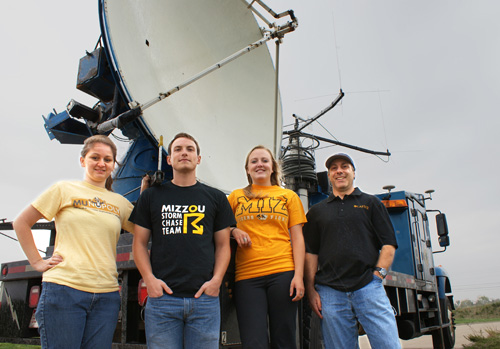 The Department of Soil, Environmental and Atmospheric Sciences is a part of the College of Agriculture, Food and Natural Resources.