Tenfold boost in ability to pinpoint proteins in cancer cells

Better diagnosis and treatment of cancer could hinge on the ability to better understand a single cell at its molecular level. New research offers a more comprehensive way of analyzing one cell’s unique behavior, using an array of colors to show patterns that could indicate why a cell will or won’t become cancerous.

A University of Washington team has developed a new method for color-coding cells that allows them to illuminate 100 biomarkers, a ten-time increase from the current research standard, to help analyze individual cells from cultures or tissue biopsies. The work is published this week (March 19) in Nature Communications.

“Discovering this process is an unprecedented breakthrough for the field,” said corresponding author Xiaohu Gao, a UW associate professor of bioengineering. “This technology opens up exciting opportunities for single-cell analysis and clinical diagnosis.” 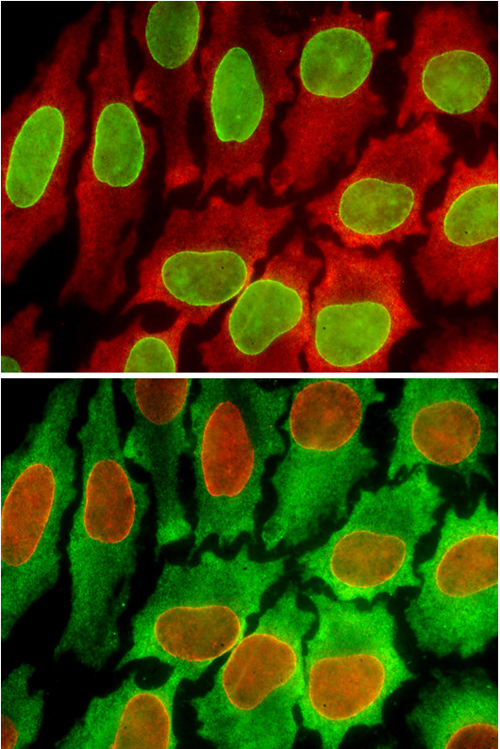 A cell specimen used for two rounds of testing. In the top panel, two biomarkers are stained green and red, and in the bottom, after the sample has been regenerated, the same biomarkers are stained red and green. This shows that the same tissue can be used for multiple rounds of testing without degrading the tissue sample. Image credit: Xiaohu Gao

The research builds on current methods that use a smaller array of colors to point out a cell’s biomarkers – characteristics that indicate a special, and potentially abnormal or diseased, cell. Ideally, scientists would be able to test for a large number of biomarkers, then rely on the patterns that emerge from those tests to understand a cell’s properties.

The UW research team has created a cycle process that allows scientists to test for up to 100 biomarkers in a single cell. Before, researchers could only test for 10 at a time.

The analysis uses quantum dots, which are fluorescent balls of semiconductor material. Quantum dots are the smaller version of the material found in many electronics, including smartphones and radios. These quantum dots are between 2 and 6 nanometers in diameter, and they vary on the color they emit depending on their size.

Cyclical testing hasn’t been done before, though many quantum dot papers have tried to expand the number of biomarkers tested for in a single cell. This method essentially reuses the same tissue sample, testing for biomarkers in groups of 10 in each round.

“Proteins are the building blocks for cell function and cell behavior, but their makeup in a cell is highly complex,” Gao said. “You need to look at a number of indicators (biomarkers) to know what’s going on.” 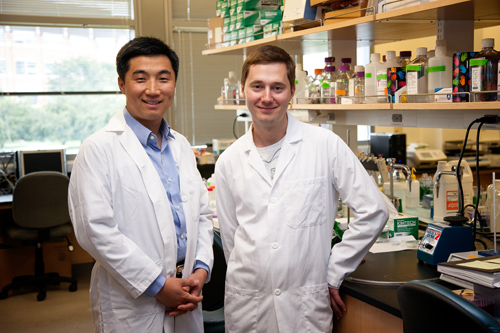 The new process works like this: Gao and his team purchase antibodies that are known to bind with the specific biomarkers they want to test for in a cell. They pair quantum dots with the antibodies in a fluid solution, injecting it onto a tissue sample. Then, they use a microscope to look for the presence of fluorescent colors in the cell. If they see particular quantum dot colors in the tissue sample, they know the corresponding biomarker is present in the cell.

After completing one cycle, Gao and co-author Pavel Zrazhevskiy, a UW postdoctoral associate in bioengineering, inject a low-pH fluid into the cell tissue that neutralizes the color fluorescence, essentially wiping the sample clean for the next round. Remarkably, the tissue sample doesn’t degrade at all even after 10 such cycles, Gao said.

For cancer research and treatment, in particular, it’s important to be able to look at a single cell at high resolution to examine its details. For example, if 99 percent of cancer cells in a person’s body respond to a treatment drug, but 1 percent doesn’t, it’s important to analyze and understand the molecular makeup of that 1 percent that responds differently.

“When you treat with promising drugs, there are still a few cells that usually don’t respond to treatment,” said Gao. “They look the same, but you don’t have a tool to look at their protein building blocks. This will really help us develop new drugs and treatment approaches.”

This figure shows the cyclical process developed in the study. In step 1, the colored balls representing quantum dots of different colors are used to label biomarkers in cell and tissue samples. Step 2 shows how each biomarker can be isolated and separated into distinct images for analysis. Step 3 illustrates how the tissue sample is flushed clean between rounds to begin biomarker testing again. Image credit: Xiaohu Gao (Click image to enlarge)

The process is relatively low-cost and simple, and Gao hopes the procedure can be automated. He envisions a chamber to hold the tissue sample, and wire-thin pumps to inject and vacuum out fluid between cycles. A microscope underneath the chamber would take photos during each stage. All of the images would be quantified on a computer, where scientists and physicians could look at the intensity and prevalence of colors.

Gao hopes to collaborate with companies and other researchers to move toward an automated process and clinical use.

“The technology is ready,” Gao said. “Now that it’s developed, we’re ready for clinical impacts, particularly in the fields of systems biology, oncology and pathology.”