Grandfather, 57, looks forward to celebrating Easter with family and friends

Fernando Padilla could barely breathe or walk more than a few steps. An incurable disease, pulmonary fibrosis, was causing his lungs to turn to hardened scar tissue, and he was permanently tethered to an oxygen tank. His only hope was a double lung transplant.

In November 2012, he got an early-morning call that a pair of donor lungs was available.

Upon arriving at Ronald Reagan UCLA Medical Center, he was told of a new study testing an experimental device — a portable organ-preservation system that keeps donor lungs functioning and “breathing” in a near-physiologic state outside the body during transport to a recipient, instead of the standard method, in which the organs are kept in an icebox in a non-functioning, non-breathing state.

Padilla consented to participate in the study and was randomized to become the first patient at UCLA — and in the United States — to undergo the ‘breathing lung’ transplant using the TransMedics Organ Care System (OCS).

“If they’ve got new technology to deliver the lungs still breathing, I think that would be better than trying to wake them back up again after being on ice,” said the former construction worker, who had helped build the very same hospital where he was now a patient. “I’m just following technology.”

With the OCS, the lungs are removed from a donor’s body and are placed in a mobile high-tech box, where they are immediately revived to a warm, breathing state and perfused with oxygen and a special solution supplemented with packed red-blood cells. The device also features monitors that display how the lungs are functioning during transport. 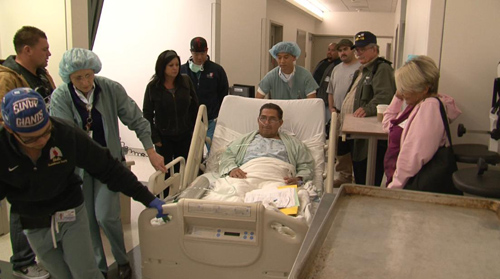 Fernando Padilla on his way to surgery. (Image courtesy of UCLA)

“Lungs are very sensitive and can easily be damaged during the donation process,” said Dr. Abbas Ardehali, a professor of cardiothoracic surgery and director of the heart and lung transplantation program at UCLA. “The cold-storage method does not allow for reconditioning of the lungs, but this promising technology enables us to potentially improve the function of the donor lungs before they are placed in the recipient.”

In addition, the technology could help transplant teams better assess donor lungs, since the organs can be tested in the device, over a longer period of time. It could also help address the shortage of available organs by allowing donor lungs to be safely transported across longer distances, expanding the donor pool for the more than more than 1,650 Americans who are currently on the waiting list for a lung transplant.

Padilla’s donor lungs were transported, using the OCS, from a neighboring state to UCLA. His seven-hour transplant surgery was a success, and he now relishes every deep breath. The oxygen tanks are long gone. He walks several miles a day with his wife, plays with his grandkids and enjoys life with his family. They are immensely grateful to the organ donor who supplied him with the precious “gift of life.”

“For patients with end-stage lung disease, lung transplantation can dramatically improve the patient’s symptoms and offer relief from severe shortness of breath,” added Dr. David Ross, a professor of medicine and medical director of UCLA’s lung and heart-lung transplantation program and UCLA’s pulmonary arterial hypertension and thromboendarterectomy program. “The ‘breathing lung’ technology could potentially make the transplantation process even better and improve the outcomes for patients suffering from lung disease.” 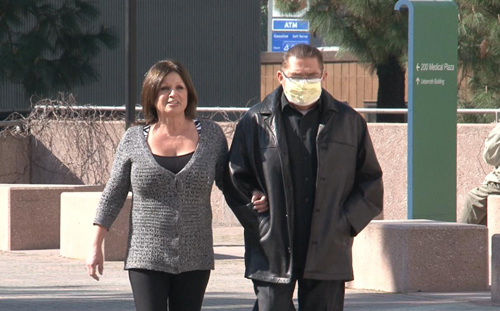 Fernando Padilla and his wife. (Image courtesy of UCLA)

UCLA is currently leading the U.S. arm of the international, multicenter pivotal clinical INSPIRE study of the OCS, developed by medical device company TransMedics; Ardehali is the principal investigator for UCLA. The purpose of the trial is to compare donor lungs transported using the OCS technology with the standard icebox method. The INSPIRE trial is also underway at lung transplant centers in Europe, Australia and Canada and will enroll a total of 264 randomized patients.

The “breathing lung” device follows on the heels of TransMedics’ “heart in a box” technology, which delivers donor hearts in a similar manner. A national, multicenter study of the heart technology, also led by UCLA, is ongoing.

UCLA’s lung and heart-lung transplant program is the largest lung transplantation program on the West Coast and leads the nation in patient outcomes. The program pioneers novel technologies in lung preservation, recipient immune monitoring and immunosuppression and is responsible for significant advances in transplantation for extremely ill and high-risk transplant candidates. 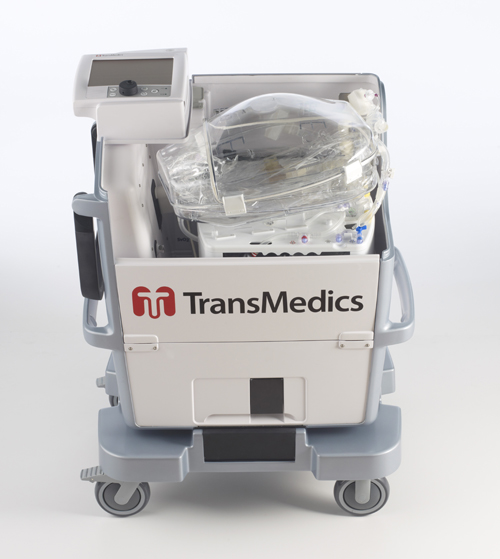 To sign up to be an organ donor, please visit www.donatelife.net.