For years, researchers have developed thin films of bismuth telluride (Bi2Te3) – which converts heat into electricity or electricity to cooling – on top of gallium arsenide (GaAs) to create cooling devices for electronics. But while they knew it could be done, it was not clear how – because the atomic structures of those unlikely pair of materials do not appear to be compatible. Now researchers from North Carolina State University and RTI International have solved the mystery, opening the door to new research in the field.

“We’ve used state-of-the-art technology to solve a mystery that has been around for years,” says Dr. James LeBeau, an assistant professor of materials science and engineering at NC State and co-author of a paper on the research. “And now that we know what is going on, we can pursue research to fine-tune the interface of these materials to develop more efficient mechanisms for converting electricity to cooling or heat into electricity. Ultimately, this could have applications in a wide range of electronic devices.” 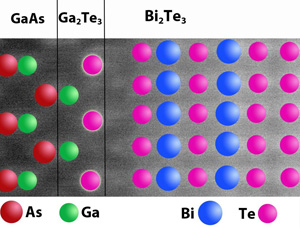 Researchers have found that the two materials are actually separated by a thin layer of a hitherto unsuspected third material. Image credit: North Carolina State University

To study the phenomenon, the researchers had to create the nanometer-scale thin films on a GaAs substrate, or foundation. The GaAs is first placed in a vapor deposition chamber. Molecules containing bismuth and tellurium are then introduced into the chamber, where they react with each other and “grow” into a crystalline Bi2Te3 structure on the surface of the GaAs.

Using advanced “Super-X” X-ray spectroscopy technology in conjunction with an aberration-corrected scanning transmission electron microscope, the researchers were able to determine what was binding the Bi2Te3 to the GaAs – and it was not what they were expecting.

“While these materials have been investigated previously by RTI and NC State, the state-of-the-art techniques applied by LeBeau and his team have revealed significant new insights into how the film grows,” notes Dr. Rama Venkatasubramanian of RTI International, who is also a co-author of the paper.

The paper, “Atomic scale structure and chemistry of Bi2Te3/GaAs interfaces grown by metallorganic van der Waals epitaxy,” is published online in Applied Physics Letters. Lead author of the paper is Houston Dycus, a Ph.D. student at NC State. Co-authors are Ryan White, a postdoctoral researcher at NC State; Drs. Jonathan Pierce and Rama Venkatasubramanian of RTI International; and LeBeau. The research was supported by the Defense Advanced Research Projects Agency.