The ancestor of all modern African monkeys was alive 3 million years earlier than previously thought and coexisted with members of a now-extinct branch of the monkey family tree, according to new evidence from anthropologists.

“We pushed back the origin of modern monkeys by a huge chunk of time,” said anthropologist Andrew Hill of Yale University, the senior researcher on the project. “This means there are all sorts of things we can think about. You can start to look at animal interactions that might have taken place.”

Hill and colleagues reported their work online March 18 in the journal PNAS.

“Now we have them at the same site and know they existed at the same time,” said Hill. “It was speculated that they were involved in competition, but until now we never had any evidence that they lived within a million or two years of each other.” 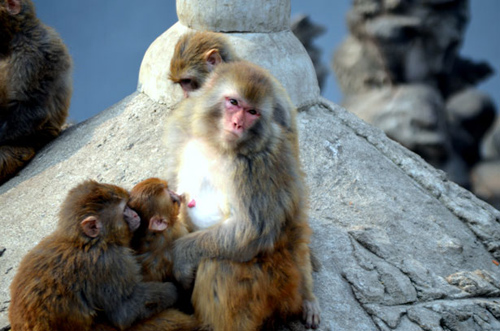 All living African monkeys — such as baboons, macaques, and vervet monkeys — belong to the Cercopithecid family, a lineage distinct from the family Victoriapithecidae, or basal African monkeys, which are believed to have died out 12.5 million years ago.

Competition among the monkeys could have led to the evolution of traits and behaviors — such as eating fruits and leaves — that allowed the survivors to thrive and endure, Hill said.

The most revealing of the fossil teeth is a right lower molar collected in 2006. It has morphological features that show clear differences from the earlier Victoriapithecids and ally it firmly with modern monkeys. At the same time the less-developed shearing crests on the tooth suggest that the fossil monkey was less committed to eating leaves than are its modern relatives, researchers said.

The paper’s lead author, James B. Rossie, a former graduate student of Hill’s at Yale, is associate professor of anthropology at Stony Brook University. Co-author Christopher C. Gilbert, a former Yale postdoctoral researcher, is assistant professor at Hunter College in the City of New York.