Sailing in a Sea of Microbes

Researchers led by Matt Sullivan at the UA are among the first to dive into the world of viruses drifting through the world’s oceans.

Surrounded by the deep blue of the Pacific Ocean stretching from horizon to horizon, a lonely dot is glinting in the sun. It is the aluminum hull of a sailboat, a 118-foot schooner with white sails billowing from two masts.

On the deck, crewmembers and scientists are milling about. Commands are flying back and forth, and soon a strange contraption consisting of tubes clustered around an array of sensors dangling from a crane is lowered into the water, until it disappears in the clear blue depths. 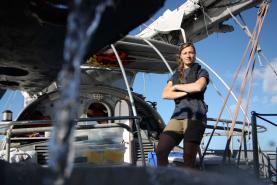 Melissa Duhaime, at the time a postdoctoral fellow in the lab of Matt Sullivan in the University of Arizona’s department of ecology and evolutionary biology, is getting ready for another sampling haul of ocean water.

Duhaime is one of seven scientists on board the research vessel Tara Oceans, where she spends six weeks sailing on the leg from Chile to Easter Island as part of the expedition’s three-year cruise across the world’s seas and oceans.

Her mission: collect specimens of some of the least known but most important drivers of the Earth’s food production, oxygen production and even climate: ocean viruses.

In a paper published recently on the important goals of the Tara Oceans research cruise, members of the Sullivan lab agree with their co-authors that the major global biogeochemical cycles – nutrient production, atmospheric chemistry and climate – for the most part are controlled by things we cannot see: viruses, bacteria, single-celled algae and other tiny creatures.

Together, they form the bulk of the oceans’ biomass. And, as scientists have only begun to realize, they call the shots. For example, microbes produce almost as much oxygen as all plants on land while absorbing half of the greenhouse gas carbon dioxide produced by human activity, Tara scientists say.

The Ocean, on a Microscopic Scale

During an expedition to the Arctic, Tara found evidence for the reality of global warming. Increasing greenhouse gases in the atmosphere and particularly the acidifying effect of carbon dioxide dissolving corals and shells are among the chief concerns of the scientific community. How plankton will adjust to abrupt changes in the environment is one of the chief questions Tara Oceans seeks to answer.

“The ocean may seem fluid and continuous to us, but on a microscopic scale, it’s more like a web of snot,” said Sullivan. “The water is full with all kinds of mucous secretions and exudates from all these different organisms that create a matrix in the water. You may not notice this if you swallow a gulp of seawater, but if you were a microbe you would see this world of webs.” 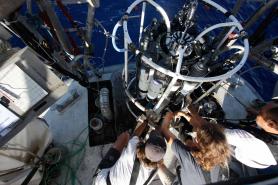 The "rosette," or Connectivity Temperature and Depth Device as it is properly referred to, allows scientists to collect water samples using bottles that open and close at defined depths. (Photo: Anna Deniaud/Tara Oceans)

Because viruses lack a metabolism of their own and depend on hijacking organisms for reproduction, most biologists don’t consider them living creatures. Yet, precisely that way of living vicariously is what makes them so powerful: Many have evolved highly specialized interactions with their hosts, often killing them in the process.

For example, certain ocean viruses invade algae and take control over the photosynthetic process, which replenishes the oxygen we breathe. Others simply kill off vast amounts of organisms, putting a cap on the biomass that can support food webs in the world’s oceans.

Researchers estimate there are 1 million times more virus particles on Earth than there are stars in the universe: about 10 nonillion, a number with 31 zeros. Ninety percent of those viruses are believed to inhabit the oceans.

Sullivan estimates that a shot glass of seawater may contain anywhere from 4,000 to 80,000 different types of viruses, but cautions that such numbers suffer from a general lack of knowledge in the scientific field.

“We still don’t have a good concept of what constitutes a species in a virus or a microbe,” he said. “Much of the work in our lab is centered around that question. We are trying to understand what defines a biologically cohesive group and separates it from another.” 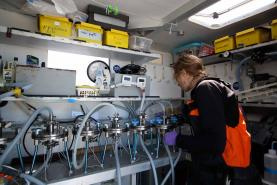 The picture is expected to turn out extremely complicated, because viruses and microbes routinely exchange genes, constantly morphing into something new. To gain answers, Sullivan’s team is applying an approach called population genomics, and the samples Duhaime collected aboard Tara Oceans are key to this approach.

“Once we have identified a number of different viruses from one seawater sample that infect the same host microbe, we want to address the question, ‘How different are those viruses from each other?'” Duhaime said. “And how are viruses of the same type different from one part of the ocean to the next?”

She added, “Those are fundamental questions ecologists have been asking about large organisms, from wolves to saguaro cacti, for centuries. But counting and differentiating the small, elusive viruses in the environment has been so limited by the technologies available that only now can we begin to answer these questions.”

“By studying those samples, we’re going to start to see the different ways that these viruses are tweaking the biogeochemical cycles that fuel the Earth’s processes,” Sullivan said. “We’re going to get a better picture of the viral types that are out there; we’ll learn how to bound them into groups, and start to figure out what their impact is.”

“What we’re doing here really is a new brand of science,” he added. “We take advantage of everything modern life sciences have to offer. We apply an unprecedented diversity of measurements to the same sample to understand it more thoroughly, using for example cutting-edge imaging, oceanography and the latest techniques to study an organism’s entire set of genes and proteins.”

Lab, on a Boat

Aboard Tara Oceans, the sampling device has reached the target depth of about 1,000 feet. Sensors record depth, temperature, salinity and other physical parameters, while the operator remotely opens and closes the sampling tubes to collect water samples from defined depths.

Once the samples are hauled back onto the boat, Duhaime goes to work in the on-board lab. Pumping the water through filters dense enough to capture the tiny virus particles, she concentrates her catch on filter papers and uniquely barcodes and processes them for storage.

“For each sampling station, I had probably 100 individual tubes and filters,” she said. “We had liquid nitrogen on board where we could put the samples that needed to be flash frozen.”

Every time the ship made a stopover in a major port, a courier from Germany would come and pick up the samples, package them and send them to the European Molecular Biology Laboratory in Germany, to be carefully logged. From there, the samples were distributed to the respective labs across the world.

“We’re really the key virus lab involved with Tara so we get all the virus samples from all over the world,” Duhaime said.

“90 percent of what we look at is probably new to science,” Sullivan said. “If you sequenced all the genes from a community of ocean viruses, the vast majority wouldn’t match anything in the databases.”

Since it would be prohibitively expensive to sequence the genomes from all the viruses collected from every place across the ocean for mere exploratory purposes, Sullivan’s group instead targets a particularly abundant group called T4 phages, a widespread family of viruses that infect bacteria.

“Once we have a general picture of what that group’s diversity looks like, we can tunnel in on 30 key samples that we want to do some more sophisticated analysis on, to address questions like, ‘How does its genome vary in different environments?’ We hope the results from those genome sequencing studies will tell us a lot about the genetic reasons for why that virus is in that particular environment. We’ll begin to be able to look at the drivers of niche differentiation and the reason why that viral type was selected for in that environment.”

In addition to analyzing viral genomes, Sullivan’s lab is developing a new method called quantitative electron microscopy to get a grip on and catalog the sheer diversity of shapes of viruses in the ocean.

“Even that level of description is novel and certainly for the kinds of samples we will see,” Sullivan said.

What started as a grassroots initiative of a few scientists in the Tara Oceans project has grown into a global consortium of more than 100 specialists including oceanographers, ecologists, biologists and physicists from prestigious laboratories.

“One of the beauties of this project where we look at so many ocean samples with so many tools and organismal experts is that we don’t have baseline information on what’s out there,” he added. “You could go out on a boat five years from now and do so much more just based on the kinds of things we’ve learned from Tara. It is an opportunity to really start with the basics. Anything can happen.”

Visitors to the UA’s Biosphere 2 can learn more about the Tara Oceans Expedition through an exhibit put up by students and members of the Sullivan lab.