COLUMBIA, Mo. – For nearly a year, the Midwest and southwest United States have experienced drought and warmer than normal conditions. A University of Missouri expert is predicting no relief, as he expects drought and hot conditions to continue this summer.

“I expect one of two scenarios to play out; the first is a continued La Nina climate pattern to affect our weather this summer,” said Tony Lupo, professor and chair of the Department of Atmospheric Science in the School of Natural Resources. “This will lead to a drought and above average heat throughout the Midwest from Texas to Iowa, where farmers with parched fields can least afford dry conditions. However, it is also possible that a new El Nino pattern could develop this fall. While I don’t see this happening, it would bring more favorable temperatures and precipitation patterns to the Midwest.”

In Missouri, Lupo anticipates the driest, warmest conditions in the southwest part of the state. In the St. Louis and northeastern Missouri area, he expects heavy thunderstorms and slightly cooler temperatures. In the southeast part of the state, Lupo said a tropical storm may bring rainfall to the area.

Lupo said the warm conditions in the Midwest could lead to a “heat dome” affecting the rest of the country as it did in 2011. This causes cooler temperatures in the northwest and northeast United States. In the southeast, Lupo predicts warmer than normal temperatures with normal precipitation.

Dry conditions early in the summer make heat worse throughout the rest of the season, Lupo said. He said the sun’s rays, rather than drying out wet soil, will radiate off the dry earth adding to the heat. Lupo anticipates most precipitation to come in the form of thunderstorms. He said that during La Nina years, weather is dry for two to four weeks, followed by thunderstorms featuring heavy rain. 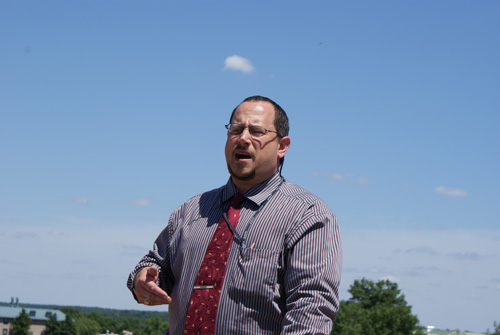 Tony Lupo, professor and chair of the Department of Atmospheric Science in the School of Natural Resources, said Midwesterners should prepare for a hot, dry summer. Image credit: University of Missouri

“Even though we’ll receive rain, heavy downpours are not as valuable as rain showers,” Lupo said. “The soil cannot absorb all of the water, and much of it runs off. We need prolonged periods of light rain to moisten the subsoil where most crops’ roots go for water.”

To develop this prediction, Lupo analyzed weather in past years. If the La Nina scenario develops, he said the current weather pattern would be similar to that of 1954 to 1956, another La Nina period. During a La Nina year, surface sea temperatures in the eastern Pacific Ocean are cooler than normal.