Scientists have created a molecular map that pinpoints genetic variants that play a role in 21 different autoimmune diseases, they report Oct. 27 in the journal Nature.

Researchers at Yale, the University of California-San Francisco (UCSF), and the Broad Institute of MIT and Harvard developed a sophisticated mathematical model and created maps of different cell types that together enabled them to identify which variants cause the immune response to go awry and cause specific diseases.

“These findings give new insight into the cause of multiple sclerosis and other autoimmune diseases,” said Yale’s David A. Hafler, the Gilbert H. Glaser Professor of Neurology, professor of immunobiology, chair of the Department of Neurology, and co-senior author of the paper.

Finding the underlying cause of human autoimmune diseases such as multiple sclerosis, rheumatoid arthritis, Crohn’s disease, and diabetes has proved elusive. Intensive investigation of the gene regions in patients with autoimmune disease had identified hundreds of common gene variants shared among these different diseases. But how these variants trigger such a wide variety of diverse diseases was not known. 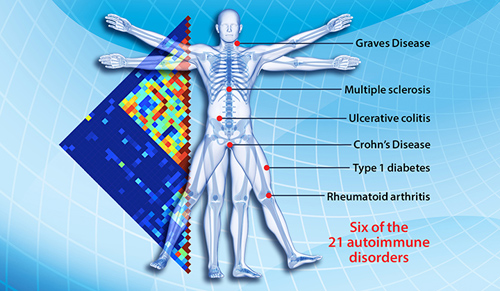 Researchers used the mathematical model they developed to analyze data from genome-wide association studies of autoimmune patients and found these tiny variations in DNA — called single nucleotide polymorphisms, or SNPs — occurred near master genetic regulators of immune system responses. They then created “maps” from data compiled by the Epigenomics project of National Institutes of Health (NIH), a federally-funded effort to map the regulatory mechanisms of the human genome across a wide range of cell types.  When they compared the SNPs with the new cell maps, the researchers pinpointed precisely which cell type causes each autoimmune disorder and how these DNA variations induce immune cells to go awry.

“The genetic changes that cause autoimmune diseases are subtle. They rarely alter protein function and, as such, have been difficult to study,” said Bradley Bernstein, senior associate member of Broad Institute, professor of pathology at Massachusetts General Hospital, and co-senior author of the study. “Here we combined new genetic and epigenetic methods to understand how these genetic changes alter immune function and cause disease.”

The findings, for instance, strongly link the cause of the neurologic disease MS to the immune system. To their surprise, researchers found no genetic variants affecting the nervous system. The results provide definitive evidence that MS is an autoimmune disease with clear evidence of a primary role of the immune system, Hafler said.

“This is highly consistent with the new MS treatments that work on the immune system, suggesting that we finally have a good handle as to the underlying causes of MS,”  he said.

Kyle Kai-How Farh of the Broad Institute and Alexander Marson from UCSF are co-first authors of the paper.

Primary funding for the study was provided by the NIH and the National Multiple Sclerosis Society.