As the WAP climate warms, it is changing from a dry, polar system to a warmer, sub-polar system with more rain.

University of Delaware oceanographers recently reported a connection between local weather conditions and the weight of Adélie penguin chicks in an article in Marine Ecology Progress Series, a top marine ecology journal.

Penguin chick weight at the time of fledgling, when they leave the nest, is considered an important indicator of food availability, parental care and environmental conditions at a penguin colony. A higher chick mass provides the chick a better likelihood of surviving and propagating future generations.

In the study, Megan Cimino, a UD doctoral student in the College of Earth, Ocean, and Environment and the paper’s lead author, compared data from 1987 to 2011 related to the penguin’s diet, the weather and the large-scale climate indices to see if they could correlate year-to-year penguin chick weight with a particular factor. She also evaluated samples from the penguin’s diet to determine what they were eating.

“The ability of a penguin species to progress is dependent on the adults’ investment in their chicks,” said Matthew Oliver, an associate professor of marine science and policy and principal investigator on the project. “Penguins do a remarkable job of finding food for their chicks in the ocean’s dynamic environment, so we thought that the type and size distribution of food sources would impact chick weight.” 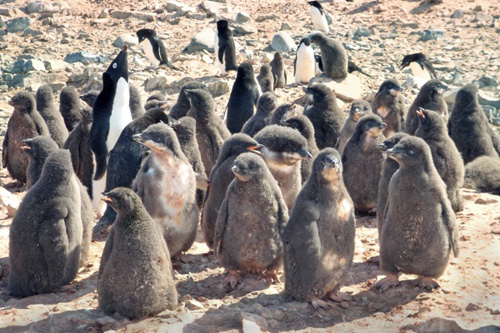 UD researchers have reported a connection between local weather conditions and the weight of Adélie penguin chicks. Photo by Megan Cimino

Impact of weather and climate

Instead, the study revealed that weather and overall atmospheric climate seemed to affect weights the most. In particular, local weather —  including high winds, cold temperatures and precipitation, such as rain or humidity — had the largest impact on penguin chick weight variations over time. For example, westerly wind and air temperature can cause a 7-ounce change in average chick weights, as compared to 3.5-ounce change caused by wind speed and precipitation.  A 7-ounce decrease in chick weight could be the difference between a surviving and non-surviving chick.

Cimino explained that while penguins do build nests, they have no way of building nests that protect the chicks from the elements. This leaves penguin chicks unprotected and exposed while adult penguins are away from the nest. Precipitation, while not considered a key variable, can cause chick plumage to become damp or wet and is generally a major factor in egg and chick mortality and slow growth.

“It’s likely that weather variations are increasing the chicks’ thermoregulatory costs; and when they are cold and wet, they have to expend more energy to keep warm,” she said. 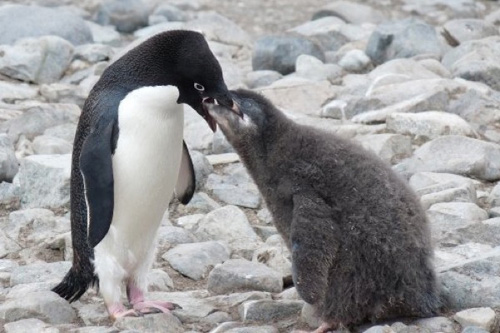 A 7-ounce decrease in chick weight could be the difference between a surviving and non-surviving penguin chick. Photo by Megan Cimino

The wind can also affect the marine environment, she continued, mixing up the water column and dispersing the krill, a penguin’s main source of food, which may cause parent penguins to remain at sea for longer periods of time and cause chicks to be fed less frequently.

“This is an interesting study, because it calls into question what happens to an ecosystem when you change climate quickly: Is it just large-scale averages that change the ecosystem or do particular daily interactions also contribute to the change,” Oliver said.

Other co-authors on the paper include William Fraser and Donna Patterson-Fraser, from the Polar Oceans Research Group, and Vincent Saba, from NOAA National Marine Fisheries Service. Fraser and Patterson have been collecting data on Adélie penguins since the late 1970s, creating a strong fundamental data set that includes statistics collected over decades, even before rapid warming was observed.

By correlating the relevant environmental variables through analysis of data from sources such as space, weather stations, etc., the researchers were able to scientifically validate a potential cause for chick weight variation over time. Using big data analyses to statistically sift through the possible causes allowed the researchers to take a forensic approach to understanding the problem.

“Climate change strikes at the weak point in the cycle or life history for each different species,” Oliver said. “The Adélie penguin is incredibly adaptive to the marine environment, but climate ends up wreaking havoc on the terrestrial element of the species’ history, an important lesson for thinking about how we, even other species, are connected to the environment.”

Cimino will return to Antarctica next month to begin working with physical oceanographers from University of Alaska and Rutgers, through funding from the National Science Foundation. Using robotics, she will investigate what parent penguins actually do in the ocean in order to gain a broader perspective on how the penguins use the marine environment. In particular, she hopes to explore other possible contributing factors to chick weight variation such as parental foraging components that were not part of this study.

“It’s important for us to understand what’s going on, especially as conditions are getting warmer and wetter, because it may give us an idea of what may happen to these penguins in the future,” Cimino said.

The work reported here is supported in part through funds from the National Marine Fisheries Service, NASA and the National Science Foundation.