EAST LANSING, Mich. — Continuing a global effort to prevent malaria infections, Michigan State University researchers have created a new malaria vaccine – one that combines the use of a disabled cold virus with an immune system-stimulating gene – that appears to increase the immune response against the parasite that causes the deadly disease.

At the same time, the group led by Andrea Amalfitano of the College of Osteopathic Medicine also discovered another immune-system stimulating agent – created at MSU and which has been successful in improving immune responses in vaccines for diseases such as HIV – paradoxically made for a less effective malaria vaccine.

Both of the findings will help researchers develop more effective vaccine platforms in general, and malaria vaccines specifically, hopefully leading to human clinical trials soon, Amalfitano said. The research is published in the current edition of PLoS ONE. 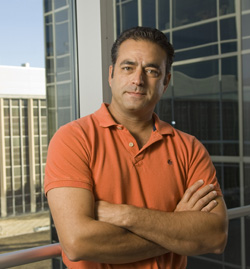 “Researchers across the globe are working on ways to prevent people from becoming infected with malaria,” said Amalfitano of the disease that kills up to a million people each year, mainly in sub-Saharan Africa. “Some vaccines are showing promise, but they are not as effective as they need to be for any mass distribution.”

Amalfitano and his research team are focusing on one such vaccine platform, spearheaded by the U.S. Army, that targets a certain gene on the malaria parasite, a protein called Circumsporozoite Protein, or CSP.

“What we are looking to do is improve the ability of the vaccine to induce immune responses to that protein,” Amalfitano said. “We are adding genes to the vaccine to try and stimulate the immune system.”

Those genetic agents, similar to chemical adjuvants, are stimulants that improve the ability of vaccines to induce beneficial immune responses in general.

In mouse models, the researchers used two such “gene-adjuvants”: rEA and EAT-2, both of which aimed to elicit improved immune responses to the malaria CSP gene. Surprisingly, the rEA agent – which was developed at MSU in part by the late Barnett Rosenberg – did not produce the desired result and in fact seemed to worsen the animal’s ability to generate an immune response to CSP.

However, the EAT-2 gene-adjuvant stimulated the immune system in a different way, and Amalfitano and his team were able to increase the ability of the immune system to respond to CSP to a level that surpassed currently available malaria vaccine systems.

“The results were surprising, but we were able to hit our goal eventually,” he said. “This research will help us as we create a viable vaccine. While the way that rEA is trying to stimulate the immune system may not be the best way for malaria, we did come up with an alternative adjuvant to effectively target the parasite.”

Amalfitano said the next step is to see if researchers can prevent malaria in animal models using the EAT-2 gene-adjuvant: “Then we can take the lessons learned and really go forward and do what’s necessary to feel confident to begin human trials.”