• Drivers in New Delhi, Bangalore, Nairobi and Milan argue most over parking spaces

IBM’s first parking survey released today found that drivers in 20 international cities face a daily struggle in finding a parking space. In the past year, nearly six out of 10 drivers have abandoned their search for a space at least once, and more than a quarter have gotten into an argument with a fellow motorist over a parking space

In addition to the typical traffic congestion caused by daily commutes and gridlock from construction and accidents, reports have estimated that over 30 percent of traffic in a city is caused by drivers searching for a parking spot. Not only do inefficient parking systems result in congestion and increased carbon emissions, they also waste commuters’ time, lead to lost productivity and economic opportunities and can lead to inefficient city services.

Interestingly, IBM’s global parking survey showed that drivers in both developed and emerging economies face many of the same parking frustrations, regardless of where they live or their ranking in the recently released Commuter Pain Index. Drivers in Nairobi averaged 31.7 minutes in their longest search for a parking spot, and commuters in Bangalore, Beijing, Buenos Aires, Madrid, Mexico City, Paris and Shenzhen all reported means significantly above the worldwide average. Seventeen percent of drivers in Milan and Beijing and 16 percent of drivers in Madrid and Shenzhen spent 31 to 40 minutes looking for parking.

In fact, over half of all drivers in 16 of the 20 cities surveyed reported that they have been frustrated enough that they gave up looking for a parking space and simply drove somewhere else. For example, nearly three out of four commuters surveyed in Shenzhen (80 percent), Beijing (74 percent), Nairobi (76 percent), Singapore and Mexico City (73 percent), and Madrid (69 percent) reported not reaching their intended destination because they gave up looking for parking. Conversely, respondents in Chicago (63 percent), Stockholm (62 percent), Montreal (58 percent) and Toronto (57 percent) rarely experience this frustration.

IBM compiled the results of the survey into its first-ever Parking Index that ranks the emotional and economic toll of parking in a cross-section of 20 international cities with the highest number being the most onerous. The Index reveals a wide range in the parking pain experienced from city to city. Chicago had the least pain when it comes to parking in the cities studied, followed by Los Angeles and Toronto. Here’s how the cities stack up: 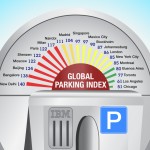 “Clearly, drivers worldwide are facing frustration and pain, not only during the daily commute, but also when searching for a parking spot,” said Vinodh Swaminathan, director of intelligent transportation systems, IBM. “It’s easy to see how this parking ‘pain’ can impact productivity of citizens and economic opportunities in a city. The ability to combine transportation information being collected with a better understanding of their citizens’ parking needs can help cities not only better match parking supply with demand from commuters, but also better anticipate and avoid gridlock and make significant inroads to reduce congestion.”

About the IBM Parking Survey

The IBM global parking survey, which surveyed 8,042 commuters in 20 cities around the world, is part of IBM’s annual Commuter Pain survey, conducted to better understand consumer attitudes around traffic congestion, as the issue reaches crisis proportions around the world, and higher levels of auto emissions stir environmental concerns. These events are impacting communities around the world, where governments, citizens and private sector organizations are looking beyond traditional remedies like adding roads to reverse the negative impacts of increased road congestion.

To join in the conversation on Smarter Transportation, join us on LinkedIn and Twitter.

Visit here for more on IBM and Smarter Traffic.

See the results of the 2011 Commuter Pain survey here.