*By studying tumor cell behavior in a novel “scaffold-free” 3-D system, researchers have determined that the protein Pannexin1 may play an important biomechanical role in binding tissues together, an effect that is lost in cancerous cells.*

PROVIDENCE, R.I. [Brown University] — First there is the tumor and then there’s the horrible question of whether the cancerous cells will spread. Scientists increasingly believe that the structural properties of the tumor itself, such as how tightly the tumor cells are packed together, play a decisive role in the progression of the disease. In a new study, researchers show that the protein Pannexin1, known to have tumor-suppressive properties, plays an important role in keeping the cells within a tissue closely packed together, an effect that may be lost with cancer.

“In healthy tissues, the recently discovered protein Pannexin1 may be playing an important role in upholding the mechanical integrity of the tissue,” said first author and Brown University M.D./Ph.D. student Brian Bao. “When we develop cancer, we lose Pannexin1 and we lose this integrity.”

The results appeared in advance online in the Journal of Biological Chemistry on Jan. 20. 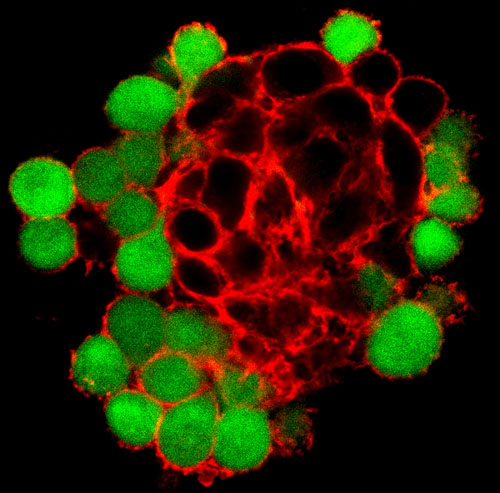 To conduct their research, the group at Brown University and the University of British Columbia employed a “3-D Petri dish” technology that allows investigators to watch closely how cells interact with each other, without scientists having to worry about additional interactions with surrounding scaffolding or the culture plate itself. How readily the cells form large multicellular structures therefore reflects their interactions with each other, not their in vitro surroundings.

Starting with rat “C6” glioma (brain tumor) cells that do not express Pannexin1, the researchers left some unaltered and engineered others to express Pannexin1. After putting the different cells into the 3-D Petri dishes and watching them interact for 24 hours, they saw that the Pannexin1 cells were able to form large multicellular tissues much faster and more tightly than the unaltered cancer cells.

To confirm that Pannexin1 was indeed causing these changes, Bao and his colleagues treated their samples with the drugs Probenecid and Carbenoxolone, which are well known inhibitors of Pannexin1. They saw that sure enough, the drugs negated Pannexin1’s accelerating effect. 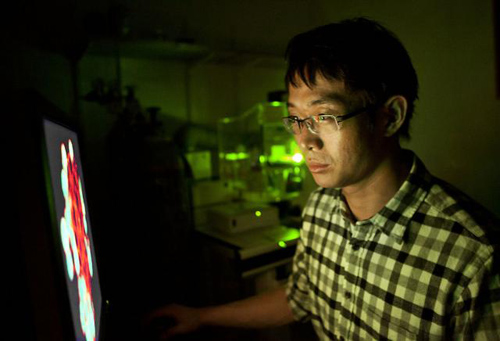 Brian Bao. “In healthy tissues, the recently discovered protein Pannexin1 may be playing an important role in upholding the mechanical integrity of the tissue. When we develop cancer, we lose Pannexin1 and we lose this integrity.” Image credit: Mike Cohea/Brown University

Then the team was ready to achieve the the study’s main aim, Bao said, namely to determine how Pannexin1 was able to drive these cells to clump together faster and tighter. They found that Pannexin1 sets off a chain reaction involving the energy-carrying molecule ATP and specific receptors for it.

When all experiments were done, Bao, Morgan, and their collaborators had found that as soon as the cells touched each other, Pannexin1 channels were stimulated to open and release ATP. The ATP then bound to cell surface receptors, kicking off intracellular calcium waves that ultimately remodeled the network of a structural protein called actin. This remodeling increases the forces between the cells, driving them to bind together more tightly.

Figuring out that sequence, and Pannexin1’s role in it, is perhaps the study’s biggest contribution to cancer research, Bao said.

“Using their single-cell systems, others have been able to carefully study individual pieces of this cascade,” he said. “We came from a different perspective. Because the strength of our assay is that we can look at gross multicellular behavior in 3-D, we could ask, ‘Does this actually manifest into something tangible on the multicellular level?’”

Having gained this understanding of Pannexin1’s role in the mechanics of tumors, Bao is now engaged in research to answer the obvious next questions: Does Pannexin1 affect the tumor’s ability to spread and invade? When cancerous cells regain Pannexin1 expression, are they less likely to spread and leave the tumor?

The paper’s other authors include Christian Naus from the University of British Columbia and Charles Lai, currently at Harvard–Massachusetts General Hospital.