Got Food Allergies? Thanks to UCLA, You Can Test Your Meal on the Spot Using a Cell Phone

Are you allergic to peanuts and worried there might be some in that cookie? Now you can find out using a rather unlikely source: your cell phone.

A team of researchers from the UCLA Henry Samueli School of Engineering and Applied Science has developed a lightweight device called the iTube, which attaches to a common cell phone to detect allergens in food samples. The iTube attachment uses the cell phone’s built-in camera, along with an accompanying smart-phone application that runs a test with the same high level of sensitivity a laboratory would.

Food allergies are an emerging public concern, affecting as many as 8 percent of young children and 2 percent of adults. Allergic reactions can be severe and even life-threatening. And while consumer-protection laws regulate the labeling of ingredients in pre-packaged foods, cross-contaminations can still occur during processing, manufacturing and transportation. 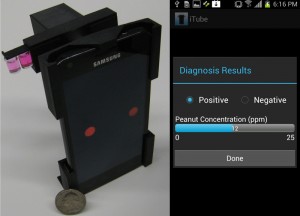 Although several products that detect allergens in foods are currently available, they are complex and require bulky equipment, making them ill-suited for use in public settings, according to the UCLA researchers.

The iTube was developed to address these issues, said Aydogan Ozcan, leader of the research team and a UCLA associate professor of electrical engineering and bioengineering. Weighing less than two ounces, the attachment analyzes a test tube–based allergen-concentration test known as a colorimetric assay.

To test for allergens, food samples are initially ground up and mixed in a test tube with hot water and an extraction solvent; this mixture is allowed to set for several minutes. Then, following a step-by-step procedure, the prepared sample is mixed with a series of other reactive testing liquids. The entire preparation takes roughly 20 minutes. When the sample is ready, it is measured optically for allergen concentration through the iTube platform, using the cell phone’s camera and a smart application running on the phone.

The kit digitally converts raw images from the cell-phone camera into concentration measurements detected in the food samples. And beyond just a “yes” or “no” answer as to whether allergens are present, the test can also quantify how much of an allergen is in a sample, in parts per million.

The iTube platform can test for a variety of allergens, including peanuts, almonds, eggs, gluten and hazelnuts, Ozcan said.

The UCLA team successfully tested the iTube using commercially available cookies, analyzing the samples to determine if they had any harmful amount of peanuts, a potential allergen. Their research was recently published online in the peer-reviewed journal Lab on a Chip and will be featured in a forthcoming print issue of the journal.

Other authors of the research included graduate student and lead author Ahmet F. Coskun and undergraduate students Justin Wong, Delaram Khodadadi, Richie Nagi and Andrew Tey, all of whom are members of the Ozcan BioPhotonics Laboratory at UCLA. Ozcan is also a member of the California NanoSystems Institute at UCLA.

“We envision that this cell phone–based allergen testing platform could be very valuable, especially for parents, as well as for schools, restaurants and other public settings,” Ozcan said. “Once successfully deployed in these settings, the big amount of data — as a function of both location and time — that this platform will continuously generate would indeed be priceless for consumers, food manufacturers, policymakers and researchers, among others.”

Allergen-testing results of various food products, tagged with a time and location stamp, can be uploaded directly from cell phones to iTube servers to create a personalized testing archive, which could provide additional resources for allergic individuals around the world. A statistical allergy database, coupled with geographic information, could be useful for future food-related policies — for example in restaurants, food production and for consumer protection, the researchers said.

For more information on the Ozcan BioPhotonics Research Group, visit https://innovate.ee.ucla.edu and https://biogames.ee.ucla.edu.