About the video: A University of Delaware research team led by Chandra Kambhamettu has developed a novel camera system to map the surface topography of Arctic sea ice, identifying the best “homes” for walrus.

Walrus use sea ice as a reproductive, migration and resting habitat. However, as sea ice melts and recedes, this marine mammal increasingly is threatened.

A University of Delaware research team, led by Chandra Kambhamettu, professor of computer and information sciences, has developed a novel camera system to map the surface topography of Arctic sea ice. The effort is part of a collaborative National Science Foundation project involving scientists at UD, the University of Virginia and the University of Alaska, Fairbanks, to assess walrus habitat.

Scott Sorensen, a doctoral student at UD, returned from a two-month expedition aboard the German research vessel Polarstern in October. He installed three cameras aboard Polarstern to continuously capture images of the sea ice during the expedition. He and fellow doctoral student Rohith Kumar designed the camera system in UD’s Video/Imaging Modeling and Synthesis Laboratory (VIMS). The team is now using the raw data to reconstruct polar ice floes in 3-D. 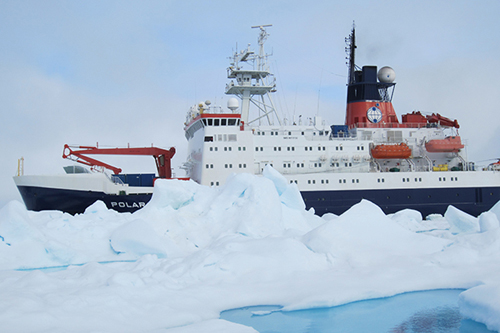 The German research vessell Polarstern in the Arctic. Photos courtesy of Chandra Kambhamettu and Stefan Hendricks of the Alfred Wegener Institute for Polar and Marine Research

Walrus gather in large herds of up to 10,000 animals in the heavy ice of the central Bering Sea in winter and migrate to the Chukchi Sea of Russia and Alaska in spring. During the summer, the sea ice melts and recedes into the Arctic Basin.

Sorensen explains that walruses move slowly on land, and if the ice floes are too large, they are at risk for predators such as polar bears. Too small and the ice will not support the walrus’ weight.

Ice, however, is very hard to reconstruct in 3-D because it is white and has no visual texture. Researchers typically rely on correspondences between pictures to recreate an image in 3-D, but determining what pixels correspond between two white images is nearly impossible. 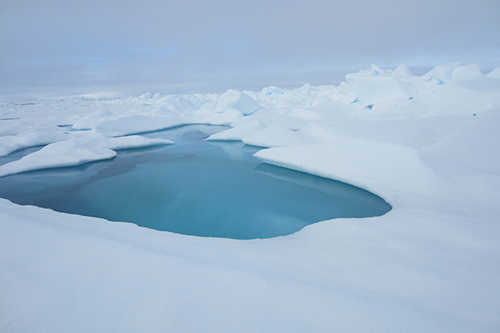 “There is good data from satellites that use infrared backscatter, but it’s really coarse data with a pixel resolution of three meters,” Sorensen notes.

“Acquiring satellite data synchronized with other ship-based measurements is quite challenging,” Kambhamettu says. “A ship-based camera system is a good way of acquiring visual data on a research cruise.”

Kumar’s algorithm, however, uses areas of higher competence to interpolate areas of lower confidence, allowing for greater surface reconstruction that results in dense 3-D reconstructions. The UD system offers precision accuracy within 10-20 centimeters and, because it only takes fractions of a second to expose the camera to the desired area or object, the data can be recorded in real time. 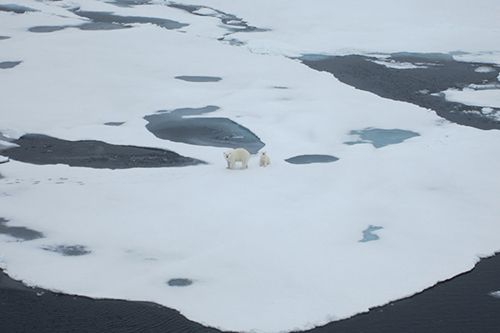 A polar bear and cub in the Arctic. Photos courtesy of Chandra Kambhamettu and Stefan Hendricks of the Alfred Wegener Institute for Polar and Marine Research

Two of the cameras aboard the ship worked in a stereo pair — like eyes. While humans combine eyesight and cognition to visually estimate the depth of different objects, cameras rely on parallax (relative shift), calibration (camera reconfiguration) and triangulation.

All objects that came into the camera’s view were recorded, creating a fundamental data set about the sea-ice surface topography in 3-D. The research team is now recreating the images in 3-D and stitching them together to create one long record of the landscape.

“This type of information has never been recorded before,” says Kambhamettu.

A third camera for recording structure from motion analysis was positioned between the stereo cameras to independently attempt to capture the same information using only one camera. The research team plans to compare the results from both systems to determine which provides the best data. 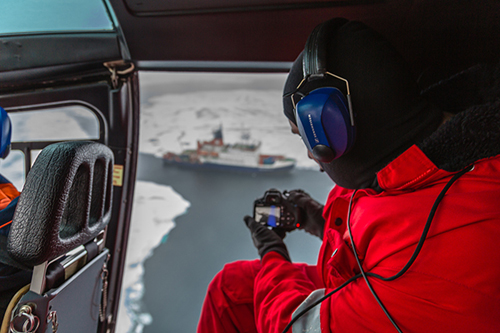 UD's Scott Sorensen aboard a helicopter in the Arctic. Photos courtesy of Chandra Kambhamettu and Stefan Hendricks of the Alfred Wegener Institute for Polar and Marine Research

Technology with many uses

According to Kambhamettu, the work could lead to a database to house habitat and other information for use by other scientists and engineers, as well as new public education information about the polar regions and the plight faced by wildlife endangered due to human infiltration in the region; the polar bear, for example. Additionally, the work may shed light on environmental hazards related to opening transoceanic shipping lines, where sea ice has melted, for transporting oil and other commodities.

“This data will be longitudinal in nature — enabling time-space data that will change with each cruise, building a useful reference for community researchers of how the topography and animal habitats are changing over time,” Kambhamettu says.

The UD system’s baseline infrastructure is versatile and can cover various distances with equal accuracy, an advantage that may also allow the technology to become competitive with LiDAR (Light Detection and Ranging) systems.

“Our system costs approximately $10,000 to $12,000 to deploy for a single use, which represents one-tenth the cost of the LiDAR system,” adds Kambhamettu. Deployed at close range, the system can record 3-D images of tabletop objects and artifacts, too.

Kambhamettu is already in talks with UD’s Office of Economic Innovation and Partnerships (OEIP) to patent the technology and protect his team’s research. Ultimately, he hopes to make available some open-source executable files for those in the research community conducting similar studies. He is also investigating licensing the system and its algorithms for industry use. 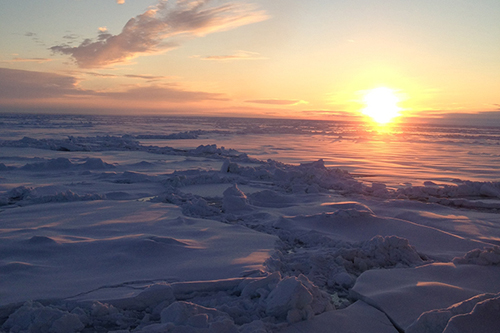 A spectacular Arctic view. Photos courtesy of Chandra Kambhamettu and Stefan Hendricks of the Alfred Wegener Institute for Polar and Marine Research

The National Science Foundation (NSF) is an independent federal agency created by Congress in 1950 “to promote the progress of science; to advance the national health, prosperity, and welfare; to secure the national defense…” With an annual budget of about $6.9 billion (FY 2010), NSF is the funding source for approximately 20 percent of all federally supported basic research conducted by America’s colleges and universities.