ANN ARBOR — A new genetic analysis has revealed that many Amazon tree species are likely to survive human-caused climate warming in the coming century, contrary to previous findings that temperature increases would cause them to die out.

However, the authors of the new study warn that extreme drought and forest fires will impact Amazonia as temperatures rise, and the over-exploitation of the region’s resources continues to be a major threat to its future. Conservation policy for the Amazon should remain focused on reducing global greenhouse-gas emissions and preventing deforestation, they said.

The study by University of Michigan evolutionary biologist Christopher Dick and his colleagues demonstrates the surprising age of some Amazonian tree species – more than 8 million years – and thereby shows that they have survived previous periods as warm as many of the global warming scenarios forecast for the year 2100. 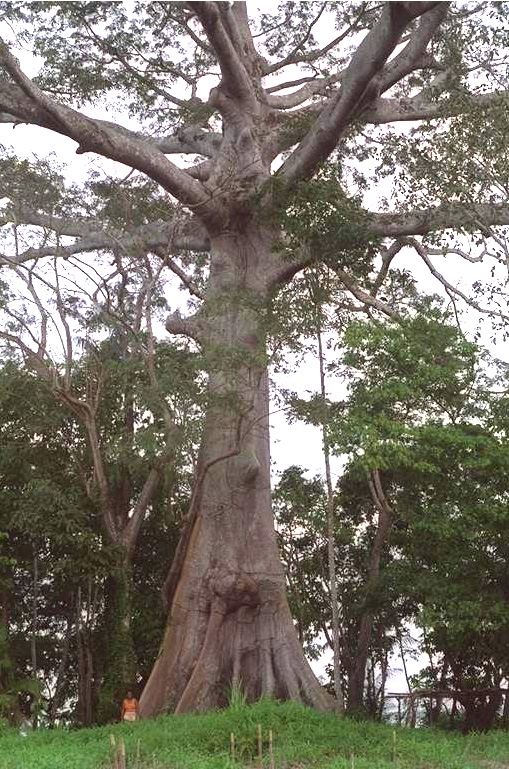 The paper was published online Dec. 13 in the journal Ecology and Evolution. The new study is at odds with earlier papers, based on ecological niche-modeling scenarios, which predicted tree species extinctions in response to relatively small increases in global average air temperatures.

“Our paper provides evidence that common Amazon tree species endured climates warmer than the present, implying that – in the absence of other major environmental changes – they could tolerate near-term future warming under climate change,” said Dick, an associate professor of ecology and evolutionary biology and acting director of the U-M Herbarium.

But study co-author Simon Lewis of University College London and the University of Leeds cautioned that “the past cannot be compared directly with the future.”

“While tree species seem likely to tolerate higher air temperatures than today, the Amazon forest is being converted for agriculture and mining, and what remains is being degraded by logging and increasingly fragmented by fields and roads,” Lewis said. “Species will not move as freely in today’s Amazon as they did in previous warm periods, when there was no human influence. Similarly, today’s climate change is extremely fast, making comparisons with the past difficult.

“With a clearer understanding of the relative risks to the Amazon forest, we conclude that direct human impacts, such as forest clearance for agriculture or mining, should remain a focus of conservation policy,” Lewis said. “We also need more aggressive action to reduce greenhouse gas emissions in order to minimize the risk of drought and fire impacts to secure the future of most Amazon tree species.” 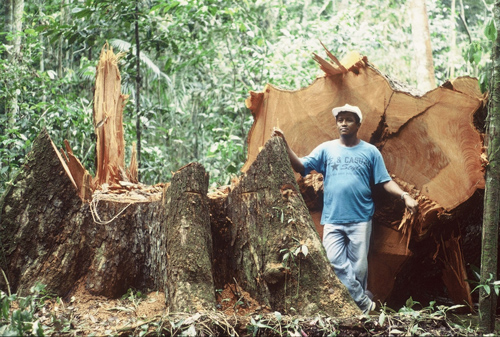 Although this species was not part of the genetic study, the felling of a giant Amazon mahogany tree is indicative of the challenges facing Amazon forests and the need to conserve population genetic diversity to facilitate adaptation to climate changes. Photo by Maristerra Lemes, Instituto Nacional de Pesquisas da Amazonia and Instituto de Pesquisas Jardim Botanico do Rio de Janeiro.

Dick and his colleagues used a molecular clock approach to determine the ages of 12 widespread Amazon tree species, including the kapok and the balsa. Then they looked at climatic events that have occurred since those tree species emerged. In general, they inferred that the older the age of the tree species, the warmer the climate it has previously survived.

“These are surprisingly old ages,” Dick said. “Previous studies have suggested that a majority of Amazon tree species may have originated during the Quaternary Period, from 2.6 million years ago to the present.” 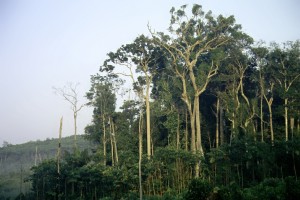 The 12 tree species used in the study are broadly representative of the Amazon tree flora. Primary forest collection sites were in central Panama, western Ecuador and Amazonian Ecuador. Additional collections were made in Brazil, Peru, French Guiana and Bolivia. Other plant samples were obtained from herbarium specimens.

“The most lasting finding of our study may be the discovery of ancient geographic variation within widespread species, indicating that many rain forest tree species were widely distributed before the major uplift of the northern Andes,” said co-author Eldredge Bermingham of the Smithsonian Tropical Research Institute.

To determine the age of each tree species, the researchers extracted and sequenced DNA from plant samples, then looked at the number of genetic mutations contained in those sequences. Using a molecular clock approach and population genetic models, they estimated how long it would take for each of the tree populations to accumulate the observed number of mutations, which provided a minimum age for each species. 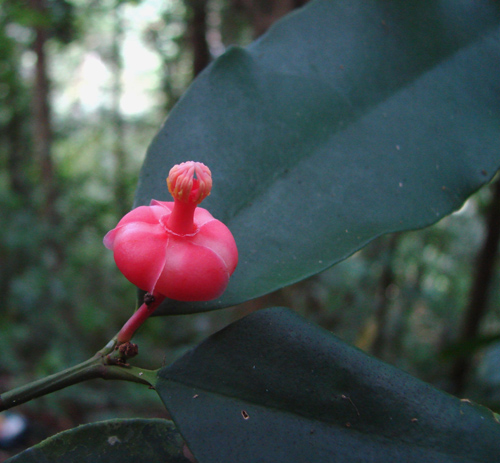 The distinctive scarlet flower of the Symphonia globulifera, a tree species known from fossil records to have colonized the Amazon basin about 15 million years ago. Photo by Rolando Perez, Center for Tropical Forest Sciences.

“An important caveat is that because we’ve been in a cold period over the past 2 million years – basically the whole Quaternary Period – some of the trees’ adaptations to warmth tolerance may have been lost,” Dick said. “Additional research is needed to test whether this has occurred.” 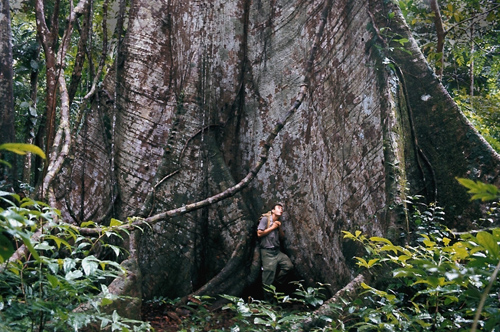 This enormous kapok tree provided some DNA for the genetic study by University of Michigan evolutionary biologist Christopher Dick and his colleagues. The species, Ceiba pentandra, was the youngest species found in the study, less than 1 million years old. Photo by Robin Foster, the Field Museum.

The Ecology and Evolution paper is titled “Neogene origins and implied warmth tolerance of Amazon tree species.” In addition to Dick, Bermingham and Lewis, Mark Maslin of University College London is a co-author. Financial support for the research was provided by the Smithsonian Tropical Research Institute, the University of Michigan, the National Science Foundation and the Royal Society.