You Are What You Eat: Low-Fat Diet with Fish Oil Slows Growth of Prostate Cancer Cells

Men who ate a low-fat diet with fish oil supplements for four to six weeks before having their prostate removed had slower cancer-cell growth in their prostate tissue than men who ate a traditional, high-fat Western diet, according to a study by researchers at UCLA’s Jonsson Comprehensive Cancer Center.

The researchers also found a change in the composition of cell membranes in both healthy cells and cancer cells in the prostates of men on the low-fat, fish oil–supplement diet. The membranes had heightened levels of omega-3 fatty acids from fish oil and decreased levels of omega-6 fatty acids from corn oil, which may directly affect the biology of the cells, though further studies are needed, said Dr. William Aronson, the study’s first author and a researcher with the Jonsson Cancer Center.

The short-term study also found that blood obtained from patients after the low-fat, fish oil diet slowed the growth of prostate cancer cells in a test tube, while blood from men on the Western diet did not slow cancer growth. 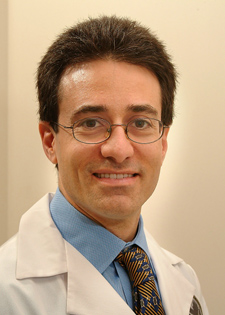 “The finding that the low-fat, fish oil diet reduced the number of rapidly dividing cells in the prostate cancer tissue is important because the rate at which the cells are dividing can be predictive of future cancer progression,” Aronson said. “The lower the rate of proliferation, the lesser the chances that the cancer will spread outside the prostate, where it is much harder to treat.”

The findings are published Oct. 25 in Cancer Prevention Research, a peer-reviewed journal of the American Association for Cancer Research.

The study, which evaluated blood samples before and after the diet began and examined tissue from removed prostates, validated previous studies Aronson and others had done on cell lines and in animal models. Aronson said using human blood and tissue in this study proved that the changes prompted by what the men were eating were clearly evident in their prostate tissue — that the “treatment” was indeed reaching the targeted organ because of the changes in the prostate cell membranes’ fatty acid composition.

“You truly are what you eat,” said Aronson, a clinical professor of urology who also serves as chief of urologic oncology at the West Los Angeles Veterans Affairs Medical Center. “Based on our animal studies, we were hopeful that we would see the same effects in humans. We are extremely pleased about our findings, which suggest that by altering the diet, we may favorably affect the biology of prostate cancer.”

Aronson measured proliferation — the rate of prostate cancer cell division — by staining tissue obtained from the radical prostatectomy specimens with an antibody against Ki-67, a protein involved in the cell-cycle progression and growth.

Diet studies often are difficult to evaluate because getting patients to comply with dietary changes can be challenging. However, the food eaten by men in both arms of this study was precisely controlled, Aronson said. The meals were prepared by chefs at the UCLA Clinical Translational Research Center and delivered in bulk to study participants several times a week. Participants also met with a dietician, kept food diaries and were required to return uneaten food.

“The key to this study was having the meals prepared and delivered to the study participants,” Aronson said. “This resulted in a very high rate of compliance, making the study very well controlled.”

With the study’s Western diet, 40 percent of the calories came from fat, which is generally equivalent to what many Americans consume today. The fat sources also were typical of the American diet and included high levels of omega-6 fatty acids from corn oil and low levels of fish oil that provides omega-3 fatty acids.

With the low-fat diet, 15 percent of the calories from fat. Additionally, the men on this diet took five grams of fish oil per day in five capsules, three with breakfast and two with dinner, to provide omega-3 fatty acids. Omega-3 fatty acids have been found to reduce the incidence of heart disease and to fight inflammation, which has been associated with certain cancers.

Aronson cautioned that he could not recommend dietary changes based on this study, which included 48 men, because of its short duration and small sample size. However, based on these results, he is organizing a much larger study of 100 men with prostate cancers who have elected active surveillance, meaning they’re not getting any treatment for their disease but are getting regular biopsies and check-ups.

The future study will randomly divide the men into a low-fat, fish oil–supplement group and a traditional Western diet group and follow them for a year to evaluate the diets’ effects on prostate cancer proliferation.

This study was funded in part by the National Cancer Institute; the Department of Veterans Affairs; and Ken Ruby, President, and Wendy L. Ruby, Secretary, of the Ruby Family Foundation.