UCLA life scientists and their colleagues have discovered the first evidence of the H1N1 virus in animals in Africa. In one village in northern Cameroon, a staggering 89 percent of the pigs studied had been exposed to the H1N1 virus, commonly known as the swine flu.

“I was amazed that virtually every pig in this village was exposed,” said Thomas B. Smith, director of UCLA’s Center for Tropical Research and the senior author of the research. “Africa is ground zero for a new pandemic. Many people are in poor health there, and disease can spread very rapidly without authorities knowing about it.”

H1N1 triggered a human pandemic in the spring of 2009, infecting people in more than 200 countries. In the U.S., it led to an estimated 60 million illnesses, 270,000 hospitalizations and 12,500 deaths, according to the Centers for Disease Control. The virus, known scientifically as Influenza A (H1N1), is made up of genetic elements of swine, avian and human influenza viruses. The pigs in Cameroon, the researchers say, were infected by humans.

“The pigs were running wild in that area,” said lead author Kevin Njabo, a researcher in UCLA’s department of ecology and evolutionary biology and associate director of the Center for Tropical Research. “I was shocked when we found out it was H1N1. Any virus in any part of the world can reach another continent within days by air travel. We need to understand where viruses originate and how they spread, so we can destroy a deadly virus before it spreads. We have to be prepared for a pandemic, but so many countries are not well-prepared — not even the United States.” 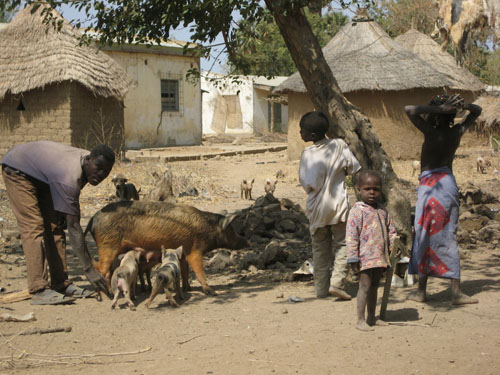 A village in northern Cameroon where 89 percent of the pigs studied had been exposed to the H1N1 virus. Image credit: Kevin Njabo/UCLA Center for Tropical Research

Njabo and his colleagues randomly collected nasal swabs and blood samples from domestic pigs that were part of 11 herds in villages and farms in Cameroon in 2009 and 2010. The results are published in the current issue of Veterinary Microbiology, a peer-reviewed scientific journal specializing in microbial animal diseases.

In the village in northern Cameroon, Njabo found two pigs with active H1N1 infections, and virtually every other pig had evidence of a past infection in its blood.

“The pigs got H1N1 from humans,” Njabo said. “The fact that pigs in Africa are infected with the H1N1 flu virus illustrates the remarkable interconnectedness of the modern world with respect to diseases. The H1N1 virus that we found in livestock in Cameroon is virtually identical to a virus found in people in San Diego just a year earlier, providing an astonishing example of how quickly the flu can spread all over the globe. 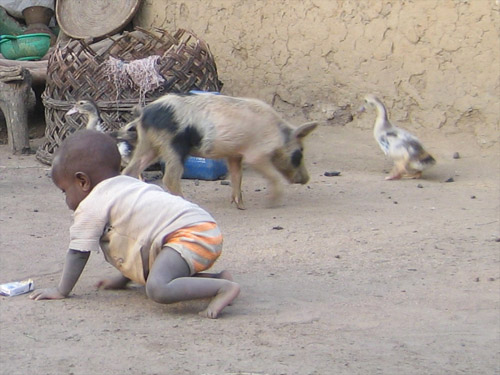 A village in northern Cameroon where 89 percent of the pigs studied had been exposed to the H1N1 virus. Image credit: Kevin Njabo/UCLA Center for Tropical Research

“The discovery of H1N1 in African swine is also important because it shows how farming practices can trigger disease outbreaks and suggests opportunities for improving human and livestock health. Our studies indicate that H1N1 infections are more common in swine that wander freely in villages than in animals that are confined to farms.”

The biologists used a diagnostic test called ELISA — enzyme-linked immunosorbent assay — to test for potential viruses. ELISA revealed the pigs had the human strain of H1N1.

Viruses in pigs can mix into a much more virulent strain that can spread extremely fast, Smith and Njabo warned.

“We are studying the interface between viruses in humans, wild animals and domestic animals and how viruses move among them,” Njabo said.

A pandemic as in ‘Contagion’ could occur

“This particular H1N1 strain is ubiquitous,” said Smith, who is also a professor of ecology and evolutionary biology and a member of UCLA’s Institute of the Environment and Sustainability. “When different strains of influenza are mixed in pigs, such as an avian strain with a human strain, you can get new hybrid strains that may affect humans much more severely and can potentially produce a pandemic that can allow human-to-human infection. This is how a pandemic can arise; we need to be very vigilant.

“It would be comforting to believe that the deaths of tens of millions of people, or more, as depicted in the movie ‘Contagion’ is merely science fiction, but something that resembles what is depicted there could happen under a certain set of circumstances.”

In addition to studying pigs, Njabo and colleagues have also collected samples from hundreds of wild birds, ducks and chickens in Cameroon and Egypt. Their colleagues at other institutions are conducting similar studies in China, Bangladesh and elsewhere.

Smith and Njabo work with UCLA’s Global Bio Lab, in collaboration with Hilary Godwin, a professor of environmental health sciences at the UCLA School of Public Health, to identify new diseases, speed up the development of new vaccines and try to prevent the next pandemic.

“The world is a global village; no area is truly isolated,” said Njabo, who was born and raised in Cameroon. “There are so many unknowns about the transmission rates of viruses between humans and wild animals. We have to expand screening.”

Since 2007, Njabo has gone to Cameroon two to three times a year to collect samples and is there currently. He informed the government’s Ministry of Livestock, Fisheries, and Animal Industries of the findings to try to reduce the spread of the disease. Smith, Njabo and colleagues will hold a workshop in Cameroon next year to tell people how to raise pigs in a way that reduces the risk of disease.

The research was conducted under the auspices of the Zoonotic Influenza Collaborative Network, led by the Fogarty International Center at the National Institutes of Health. The collaborative network is supported by international influenza funds from the Office of the Secretary of the Department of Health and Human Services.