*Research by a University of Exeter astrophysicist has helped to explain how the first stars and galaxies formed.*

*Research led by Professor Gilles Chabrier of the University of Exeter suggests that large magnetic fields were generated shortly after the Big Bang and played a key role in the formation of the first stars and galaxies.*

The international team of researchers, headed by Professor Chabrier and Dr Christoph Federrath of the Ecole Normale Supérieure de Lyon (France), used three-dimensional computer simulations to make their discovery. Their simulations show that even under extreme physical conditions, magnetic fields are efficiently amplified by turbulent flows. The findings are now published in the journal Physical Review Letters.

Both the gas between the stars in a galaxy and the medium between galaxies are magnetised. However, little is known so far about how these magnetic fields, which can be seen with telescopes, actually came about. Now, the international research team has proposed an answer. 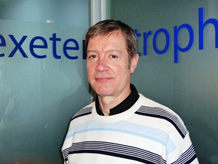 Professor Gilles Chabrier said: “The question of why there are huge magnetic fields in the intergalactic media has been puzzling us for a long time and this is the first reasonable explanation for how they came about. Magnetic fields are important for everything, including life, so this is an area of major interest to astronomers.

“We now know that turbulence and magnetic fields play a dominant role in star formation, besides gravity. This discovery significantly advances our understanding of how galaxies, stars and planets are formed.”

The research team used three-dimensional computer simulations performed on more than 32,000 processors in parallel. They demonstrated how magnetic field lines are stretched, twisted and folded by turbulent flows. The energy required for these processes is extracted from the turbulence.

The University of Exeter has one of the UK’s largest astrophysics groups working in the fields of star formation and exoplanet research. The group focuses on some of the most fundamental problems in modern astronomy – when do stars and planets form and how does it happen? They conduct observations with the world’s leading telescopes and carry out numerical simulations to study young stars, their planet-forming discs, and exoplanets. This research helps to put our Sun and the solar system into context and understand the variety of stars and planetary systems that exist in our Galaxy. Through its science strategy, the University is seeking to invest £230 million of internal and external income in five key themes of activity, one of which is Extrasolar Planets.

This research is part of a larger project led by Professor Chabrier and funded by a European Research Council (ERC) advanced grant under the European Community’s Seventh Framework Programme (FP7/2007-2013 Grant Agreement no. 247060), devoted to the understanding of the physics of Protostars and Extrasolar Planets (PEPS).