Birds may have a more highly developed sense of smell than researchers previously thought, contend scholars who have found that penguins may use smell to determine if they are related to a potential mate.

The research by the University of Chicago and the Chicago Zoological Society, which manages Brookfield Zoo, shows how related birds are able to recognize each other. The study, published Wednesday, Sept. 21 in the article, “Odor-based Recognition of Familiar and Related Conspecifics: A First Test Conducted on Captive Humboldt Penguins (Spheniscus humboldti),” in the journal PLoS ONE, could help conservationists design programs to help preserve endangered species.

“Smell is likely the primary mechanism for kin recognition to avoid inbreeding within the colony,” said Heather Coffin, lead author of the paper.

Coffin conducted the research while a graduate student at UChicago and was joined in writing the paper by Jill Mateo, associate professor in Comparative Human Development, and Jason Watters, director of animal behavior research for the Chicago Zoological Society.

“This is the first study to provide evidence for odor-based kin discrimination in birds,” said Mateo, who is a specialist on kin recognition. 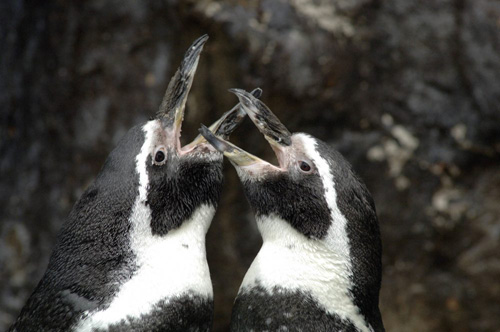 The ability to determine who is a close relative is important for animals to avoid inbreeding. An experiment at Brookfield Zoo by UChicago researchers and zoo researchers shows that penguins may be able to recognize the smell of kin and avoid mating with them. Photo by Jim Schulz/Chicago Zoological Society

Experts said the work offers important insights into how birds use smell to guide behavior.

“The work by the research group is truly groundbreaking in that it shows for the first time ever in birds how the olfactory sense of captive penguins is both informative and functional in a behaviorally critical context: namely the recognition of friends from foes in general, and relatives from non-relatives in particular,” said Mark E. Hauber, professor of psychology at Hunter College, a specialist on bird social recognition.

Penguins are ideal subjects because they typically live in colonies made up of thousands of birds. They live in monogamous pairs — an arrangement that facilitates rearing of their young, since parents frequently take turns leaving the nest to gather food. Despite the size of the community, mates are able to find each other after traveling for days foraging for food in the ocean.

Research on other sea birds has shown that smell helps guide birds to their home territory and helps them forage for food. Other research has shown that birds could use sound and sight to recognize each other, but no other studies have shown that smell might be used in connection with kin recognition, Mateo said.

In the study conducted at Brookfield Zoo, researchers first sought to determine if the penguins were able to recognize familiar individuals by smell. They constructed an experiment using a dozen penguins, from a group that included breeding pairs, their offspring and nonbreeding individuals. The birds — all Humboldt penguins—endangered natives of Peru—were from groups either on exhibit or off exhibit. 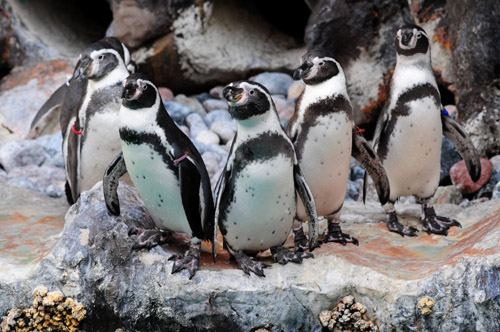 The zoo is an ideal setting for the research, as it has extensive records on which penguins are related and have been housed together, Watters said.

Researchers took odor samples from glands near the penguins’ tails, where an oil that the birds use for preening is secreted. They put the oil on cotton swabs and rubbed the odor inside dog kennels, similar to the enclosures penguins at a zoo use for their nests. They also put the odor on paper coffee filters and placed them under mats inside the kennels.

“What I found particularly notable about the study was that the authors identified the oil secreted from the penguins’ preen gland, which is rubbed on the feathers to make them water repellent, as the odor source used in recognition,” said Bryan D. Neff, professor and associate chair of biology, University of Western Ontario and an expert on kin recognition. “Oils are used in kin recognition by species of other animals, most notably a variety of insect species, including bees and wasps, which when considered with the penguin data provide a wonderful example of convergent evolution.”

“It’s important for birds that live in large groups in the wild, like penguins, to know who their neighbors are so that they can find their nesting areas and also, through experience, know how to get along with the birds nearby,” Watters said.

Because offspring usually return to the same colony for nesting, siblings have the potential of becoming mates, something that can be avoided by their smell mechanism, the new research shows.

Researchers also found that when the birds were exposed to the odors of unfamiliar kin and unfamiliar non-kin, they spent more time in the kennels with odors of unfamiliar non-kin, indicating they were probably able to determine by smell which animals they were related to and were more curious about the novel odors. Being able to make the distinction may help the penguins avoid mating with kin, researchers said.  The discovery also could assist zoos in managing their breeding programs.

“It could also be true that birds do a better job determining who potential mates are than do people in zoos, who spend a great deal of time lining up the appropriate matches,” Watters said.

The ability of birds to be able to recognize familiar scents and thus be guided to their home territory also has potential value to naturalists, he said. “You could imagine that if you were trying to reintroduce birds to an area, you could first treat the area with an odor the birds were familiar with. That would make them more likely to stay.