GAINESVILLE, Fla. — Florida has the world’s worst invasive amphibian and reptile problem, and a new 20-year study led by a University of Florida researcher verifies the pet trade as the No. 1 cause of the species’ introductions.

From 1863 through 2010, 137 non-native amphibian and reptile species were introduced to Florida, with about 25 percent of those traced to one animal importer. The findings appear online today in Zootaxa.

“Most people in Florida don’t realize when they see an animal if it’s native or non-native and unfortunately, quite a few of them don’t belong here and can cause harm,” said lead author Kenneth Krysko, herpetology collection manager at the Florida Museum of Natural History on the UF campus. “No other area in the world has a problem like we do, and today’s laws simply cannot be enforced to stop current trends.”

Florida law prohibits the release of non-native species without a state permit, but offenders cannot be prosecuted unless they are caught in the act. To date, no one in Florida has been prosecuted for the establishment of a non-indigenous animal. Researchers urge lawmakers to create enforceable policies before more species reproduce and become established. The study names 56 established species: 43 lizards, five snakes, four turtles, three frogs and a caiman, a close relative of the American alligator. 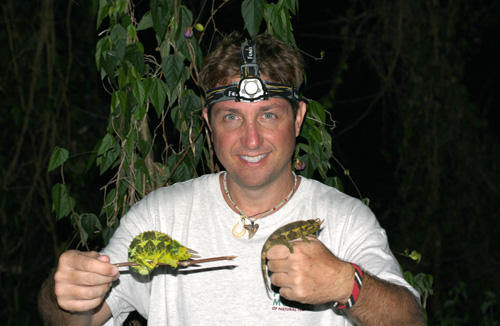 University of Florida researcher Kenneth Krysko displays non-native Jackson’s chameleons caught in Hawaii, where populations have become abundant. A pet that became popular in Florida during the 1970s and 1980s, Jackson’s chameleons were shipped from Kenya by the thousands. In Florida, their numbers continue growing as unenforceable laws allow non-native amphibian and reptile introductions to remain unchecked. Species introductions from 1863 through 2010 are detailed in a new study published online Sept. 15, 2011, in Zootaxa. Photo taken July 11, 2010. (Photo by Anthony T. Reppas)

“The invasion of lizards is pretty drastic considering we only have 16 native species,” Krysko said. “Lizards can cause just as much damage as a python. They are quicker than snakes, can travel far, and are always moving around looking for the next meal.”

Defined by the U.S. Department of Agriculture as organisms “whose introduction causes or is likely to cause economic or environmental harm or harm to human health,” invasive species are a growing concern for residents and policymakers. Only three species were intercepted before reaching the wild and researchers documented 137 introductions. The study also shows no established, non-native amphibian or reptile species has been eradicated.

Floridians have experienced some of the damage these animals can cause, from iguanas that destroy cement walls to Burmese pythons released in the Everglades that eat protected species. While the impact of many of the introduced species has not been determined, the study provides new information about how, why and when they entered the state. 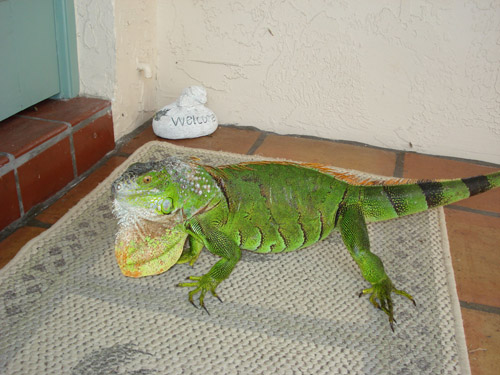 Non-native iguanas introduced to Florida dig burrows that damage cement foundations and sea walls. Some green iguanas, such as this one photographed at a front door in Lake Worth, Fla., have lost their fear of humans and are often drawn to houses where pet food is left outside or where landscaping includes ornamental flowers such as hibiscus. In a new study led by a University of Florida researcher, 137 non-native species are documented as entering Florida between 1863 and 2010. Florida’s invasive amphibian and reptile numbers lead the world. Photo taken Dec. 3, 2006. (Photo by Carl May)

The first introduction in 1863 was of the greenhouse frog, native to the West Indies. One of the most easily recognized species is the brown anole, the first introduced lizard, which reached Florida from Cuba via cargo ships in 1887. Until about 1940, nearly all non-native species arrived through this accidental cargo pathway, but the boom in popularity of exotic terrarium animals in the 1970s and 1980s led to the pet trade being accountable for 84 percent of the introductions, Krysko said.

“It’s like some mad scientist has thrown these species together from all around the world and said, ‘hey let’s put them all together and see what happens,’ ” Krysko said. “It could take decades before we actually know the long-term effects these species will have.”

Other pathways include biological control, in which an animal is intentionally released to control a pest species, and accidental introduction through the zoo or plant trade. The study will serve as a baseline for establishing effective policies for control or eradication, said Fred Kraus, a vertebrate biologist at the Bishop Museum in Honolulu who helped establish policies for invasive amphibians and reptiles in Hawaii. 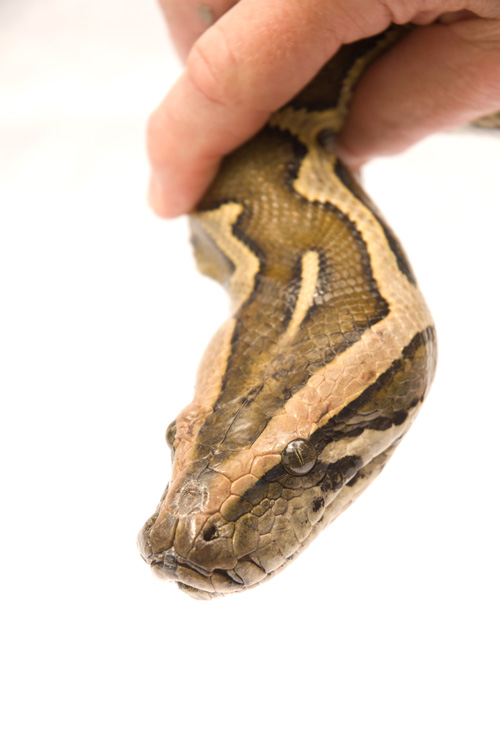 The Burmese python, pictured, is Florida’s largest invasive species documented in a study published online in Zootaxa Sept. 15, 2011. Led by University of Florida scientist Kenneth Krysko, the study verifies 137 non-native amphibian and reptile species were introduced to Florida from 1863 through 2010, with about 25 percent of those traced to one animal importer. Burmese pythons released in the Everglades are known to consume birds, alligators and mammals, including many protected species. Photo taken May 5, 2008. (Photo by Eric Zamora/Florida Museum of Natural History)

“This paper by Kenney and company I think is a good example of the approach that needs to be taken, providing the detail and being rather cautious in making immediate claims that things are established until there is evidence for it,” Kraus said. “There is a lot more work going on now, but for years it was just ignored. For years, climate change was ignored, too. You know, humans just tend to ignore bad news until you can’t ignore it anymore.”

One of the greatest obstacles pet owners face is how to feed and house an exotic animal that has become too large or difficult to handle, Krysko said.

“The biggest example is the Burmese python,” Krysko said. “It’s a large constrictor and has definitely shown impact on native species, some you just can’t even find anymore.”

The study uses fieldwork data from 12 co-authors throughout the state and research primarily using specimens in the Florida Museum of Natural History collections.

“This is a global problem and to think Florida is an exception to the rule is silly,” Krysko said. “The Fish and Wildlife Commission can’t do it alone – they need help and we have to have partners in this with every agency and the general public. Everyone has to be on board; it’s a very serious issue.”