Physicist Detects Movement of Macromolecules Engineered into Our Food

Toxin proteins are genetically engineered into our food because they kill insects by perforating body cell walls, and Professor Rikard Blunck of the University of Montreal’s Group for the study of membrane proteins (GÉPROM) has detected the molecular mechanism involved. In recognition of his breakthrough, he received the Traditional Paul F. Cranefield Award of the Society of General Physiologists yesterday evening. “This study is about gaining a better understanding of the basic functioning of the toxin proteins in order to judge the risks of using them as pesticides for our nutrition,” Dr. Blunck explained. 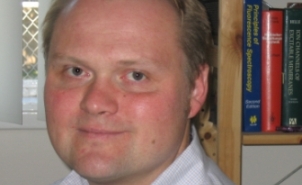 The Cry1Aa toxin of B. thuringiensis that was investigated is a member of the class of proteins which are called “pore-forming toxins” because they perforate the walls, or membranes, of cells. Cry toxins kill insect larvae if ingested by them and are, therefore, genetically engineered into a number of transgenic crops, including those for human consumption, to make them resistant against these insects.

The pores in the membranes cause minerals necessary for the cell to live to break out and collapse the energy household of the cell. While these toxins could be studied outside of cell membranes through existing techniques that provide images of the 3D structure, the toxins rapidly change their architecture once in contact with the membrane, where the traditional approaches cannot be applied.

“By watching the toxin in both its active and inactive state, and by measuring the dynamic changes of the light emitted by the molecular probes, we were able to determine which parts of it were interacting with the membrane to cause the pores.” Dr. Blunck explained. “We expect the technique to be applied to a wide range of disease-causing toxins in future.”