Geophysical Sciences Professor David Archer polled the 200 students in one of his Global Warming classes about whether they believed that humans have had an impact on climate. Approximately 90 percent of the students responded “yes,” reflecting the lessons of climate simulations that Archer had shared earlier with the students.

Those computer simulations are able to reproduce the trend toward rising temperatures, but only when they include data on rising carbon dioxide concentrations in the atmosphere. Simulations that omit the CO2 data do not accurately reproduce the changes. Archer says the link helps reveal carbon dioxide emissions as “the smoking gun” behind global warming and climate change.

But the science that established the facts of climate change long predated the invention of the computer, as documented in The Warming Papers, a book co-edited by Archer and Ray Pierrehumbert, the Louis Block Professor in Geophysical Sciences.

The book, published earlier this year, contains 32 classic scientific papers that laid the foundations of global-warming science, starting with Joseph Fourier’s 1824 work establishing what later was named the greenhouse effect. 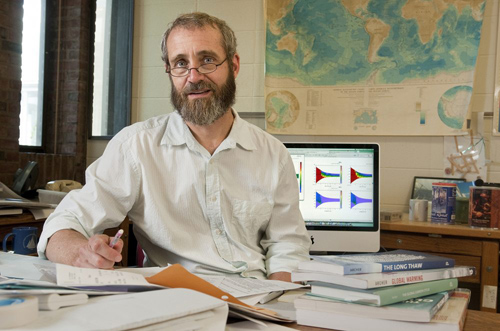 David Archer, professor in geophysical sciences, has published five books in the last five years. His latest, The Warming Papers, is co-edited with Ray Pierrehumbert, the Louis Block Professor in Geophysical Sciences. A second edition of Archer's book Global Warming: Understanding the Forecast, originally published in 2006, is being issued this year. Image credit: Lloyd DeGrane

“Fourier introduced the problem of planetary temperature as a proper object of study in physics, and established a largely correct physical framework for attacking the problem,” Pierrehumbert writes in his introduction to Fourier’s paper. “His work set the stage for most of the further developments in this area over the remainder of the 19th century. Indeed, it was only toward the end of that century that physics had caught up to the point that the first quantitative estimates of the Earth’s temperature based on Fourier’s concepts could be attempted.”

Another 19th-century work included in the book was published in 1896 by Nobel laureate Svante Arrhenius, who based a complex calculation of Earth’s climate sensitivity on measurements of the infrared intensity of moonlight.

Right for the wrong reason

Arrhenius proposed that a doubling of carbon dioxide in the atmosphere, driven by the burning of fossil fuels, would lead to a global temperature rise of approximately 6 degrees centigrade (11 degrees Fahrenheit). His estimate came out only slightly on the high side, but his method was flawed.

“It was an audacious calculation, to be sure,” Archer said. But Arrhenius’s paper was so creative, taking into account all of the fundamental elements needed to understand climate, that Archer has used it as assigned reading in his Global Warming class.

Climate theorists then went astray for decades following the publication of Arrhenius’s paper. “There were a lot of papers with fundamentally flawed formulations. Nothing really happened for 50 years,” he said.

Then came a series of classic papers starting in the 1950s, including one on rising atmospheric carbon dioxide co-authored by Roger Revelle, whose work Al Gore featured prominently in the documentary An Inconvenient Truth.

“We had a great time reading these papers in our journal club,” Archer said. The graduate students in the Climate and Paleoclimate Journal Club, in fact, played a key role in screening the papers for potential inclusion in the volume. Each week for two academic quarters, Archer, Pierrehumbert, their departmental colleagues, occasional visitors from other institutions and the students would read one of the papers and then assess its merits.

The Warming Papers is Archer’s fifth book in five years, following Global Warming: Understanding the Forecast, published in 2006, with the second edition coming out this year; The Long Thaw: How Humans are Changing the Next 100,000 Years of Earth’s Climate (2009); The Climate Crisis: An Introductory Guide to Climate Change (with Potsdam University’s Stefan Rahmstorf, 2009); and The Global Carbon Cycle (2010).

Archer has no other books in the works, preferring now to focus on his research into methane hydrates. Methane and other gases form hydrates—frozen, crystalline substances—when they undergo high pressure and low temperature in the presence of water.

Oceanic sediments harbor massive quantities of methane hydrates. Scientists suspect that the sudden release of methane from these hydrates in the geologic past have triggered climate change and even mass extinctions.

Archer is running computer simulations to discover what parameters are required to grow the quantities of methane hydrates seen today and how they would react to a severe episode of global warming. Some people fear that the hydrates would melt and release their gas suddenly, with catastrophic results for life on Earth. Archer sees it differently.

“It takes a long time to heat up the deep ocean and down into the sediment,” he explained.

“I don’t think that’s where you should start being scared. CO2 is plenty to be scared of.”