Changes in ocean chemistry due to increased carbon dioxide (CO2) emissions are expected to damage shellfish populations around the world, but some nations will feel the impacts much sooner and more intensely than others, according to a study by scientists at Woods Hole Oceanographic Institution (WHOI).

As CO2 levels driven by fossil fuel use have increased in the atmosphere since the Industrial Revolution, so has the amount of CO2 absorbed by the world’s oceans, leading to changes in the chemical make-up of seawater. Known as ocean acidification, this decrease in pH creates a corrosive environment for some marine organisms such as corals, marine plankton, and shellfish that build carbonate shells or skeletons.

Mollusks—including mussels and oysters that support valuable marine fisheries—are particularly sensitive to these changes. The new study, which was published online July 7, 2011, by the journal Fish and Fisheries, assesses nations’ vulnerabilities to decreases in mollusk harvests caused by ocean acidification.

“Some of the most important functions that marine ecosystems provide are food and income from harvests,” said lead author Sarah Cooley, a marine geochemist at WHOI.  “Nations around the world have different patterns of dependence on these marine resources, and those that depend heavily on mollusks will have to make some changes if they want to continue to have that resource readily available in the future.” 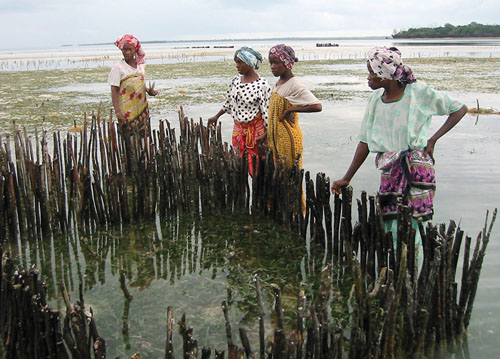 Women from Unguja Ukuu-Tindini on the island of Zanzibar off Tanzania examine a shellfish farm that they are learning to set up and tend. Hauke Kite-Powell, of the WHOI Marine Policy Center, is working with groups there to promote aquaculture as an ecologically sound way to increase the yield of seafood protein for food, while also providing jobs and a saleable commodity for the villagers. (Hauke Kite-Powell, Woods Hole Oceanographic Institution)

Among the nations expected to be most heavily impacted are Senegal, Madagascar, Gambia, Mozambique and Haiti. In addition to a high dependence on shellfish, they also currently lack mollusk aquaculture and are already struggling with protein deficiencies.

In order to assess each nation’s vulnerability, researchers examined several dependence factors: current mollusk production, consumption and export; the percentage of the population that depends on mollusks for their protein; projected population growth; and current and future aquaculture capacity.

Using surface ocean chemistry forecasts from a coupled climate-ocean model, researchers also identified each nation’s “transition decade,” or when future ocean chemistry will distinctly differ from that of 2010, and current mollusk harvest levels cannot be guaranteed. These changes are expected to occur during the next 10 to 50 years, with lower latitude countries seeing impacts sooner. Higher latitude regions have more variability, and organisms there may be more tolerant to changing conditions, Cooley said.

“Unfortunately for many poor and developing nations, they are not only the most vulnerable to the impacts of ocean acidification, but they will also experience profound chemical change sooner,” Cooley added. 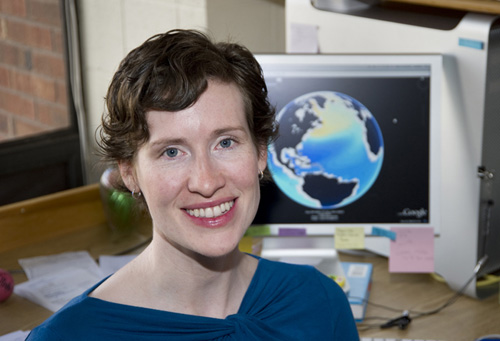 Cooley cautions against interpreting the study’s results as a ranking of nations as losers or winners when it comes to acidification impacts. “It’s more appropriate to think of these results as one of the pieces of the puzzle related to marine environments in each nation,” she said. “We recognize that every nation has its own set of challenges and key issues that are important to the people there. Providing more information about this particular piece can help policymakers and other leaders prepare for those changes and perhaps mitigate the worst of them.”

“In particular, the transition decades suggest how quickly nations should implement strategies, such as increased aquaculture of resilient species, if they want to maintain current per capita mollusk harvests,” she added.

In addition to potential strategies for policymakers, Cooley said the study highlights the role knowledge and technology transfer from developing nations could play, as well as creative thinking about managing marine ecosystems.

“Ocean acidification is not the only thing affecting marine ecosystems. It’s one of many,” she continued. “Harvesting sustainably from the oceans means viewing all of the stressors on the ecosystems, keeping them in perspective and figuring out how to navigate amongst all of those things.”

Cooley and her colleagues hope to expand their research to include socioeconomic impacts on other fisheries species from acidification. To date, studies of ocean acidification’s effects on marine organisms have largely focused on calcifying mollusks.

“Mollusks are the clearest link we have at this point,” Cooley said. “As ocean acidification responses of fin fish become more apparent, and as we learn more about the biological relationships between mollusks and other animals, then we can start zeroing in on how non-mollusk fisheries can also be affected.”

This research was supported by grants from the National Science Foundation, the Climate and Energy Decision Making Center and the WHOI Marine Policy Center.