Microsoft Facility Helps You Make Yourself at Home in the Future

*The first Microsoft Home was built in 1994 to show people how technology could transform everyday experiences, and now years later, the reinvented full-scale model home continues imagine a future in which interacting with computers is as comfortable as coming home.*

There’s a doorbell, but a palm-scan or mobile phone will also open the front door. Sensors let you know your plants need watering. You can check the inventory of your fridge and pantry via your phone while you’re out shopping. Grace, the home’s computer, will even help you check on your grandmother, remember to take your medicine, study up for a big anatomy test, or make focaccia without the need for a recipe book.

“Grace, what’s up?” asks Microsoft Home tour guide Jonathan Cluts once inside the front door. A pleasant-voiced computer responds with updates about appointments, messages, and even information about the weather, traffic and the electric scooter that is charging outside the front door.

“Really the goal of the home is to expand people’s ideas of what’s possible with technology, and have discussions about technology in a non-traditional setting,” says Cluts, a regular tour guide and director of the Strategic Prototyping Team responsible for the Microsoft Home. “It’s not a conference room, and it’s not a PowerPoint presentation. These ideas are much easier to show than explain, and we liked the idea of an immersive experience that showed what it would be like if some of this technology came to fruition,” he says.

About the video: Walk through Microsoft’s Home of the Future with Next at Microsoft blogger Steve Clayton to see what your home may soon look like. Credit: Microsoft

The full-scale, futuristic Home, located in the company’s Executive Briefing Center, has certainly evolved since its first incarnation in 1994. Its mission, however, has remained steadfast, says Craig Mundie, Microsoft’s chief research and strategy officer.

“The Home is a terrific space that enables us to prototype a truly holistic view of what the future could look and feel like,” Mundie says.

Since Mundie created the Home, hundreds of thousands of people have visited – including presidents, soccer teams, celebrities and company partners (however, because of zoning and capacity constraints, the home is not open to the public).

“Probably the No. 1 question we get on tours is, ‘How soon can we get this?’” Cluts says.

He and his team are constantly working anywhere from three to 10 years in the future when thinking up prototypes and scenarios to incorporate into the home. Since Mundie unveiled the first version of the Home, it has received a technology update about every two years.

“We’re not trying to be predictive, and we’re not making engineering prototypes; we’re just trying to expose interesting ideas and let Microsoft’s really smart product teams decide what will be the best things to create,” Cluts says. 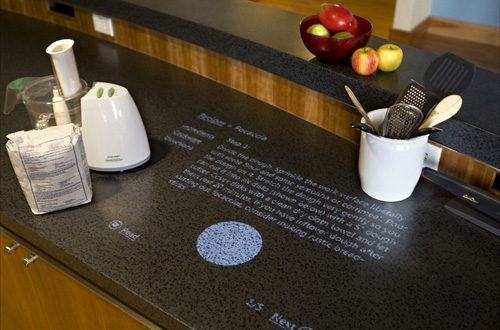 Grace, the Microsoft Home computer, suggests dishes and recipes based on the ingredients and tools set on the kitchen counter. Image credit: Microsoft

Working closely with Mundie, Cluts and his eclectic prototyping team (which has included a nuclear physicist, a musician, a commodities trader, a journalist, and a semi-pro soccer player, among others) are constantly dreaming up new ideas for the Home. They’re in the middle of a big revamp now, though Cluts isn’t saying when it will be completed.

Because the Home has been around for a while, some of its futuristic prototypes have actually come to fruition, says Cluts, a 20-year Microsoft veteran.

Inspired, the team took apart a laptop and fashioned it into a digital photo frame for the Microsoft Home. A member of the audience was also inspired by Mundie’s speech – he went on to found a company that created and sold digital photo frames.

Other visitor favorites include a countertop projection of recipes, appliance manuals and more that can be navigated by gesture or by voice (if, say, your hands are covered in the dough you’re kneading). People also love the Home’s teenager bedroom, in which all four walls can change to match the teen’s mood; the walls also feature entertainment and social connections. And if relatives are coming to stay, with one voice command the room can change from graffiti to a more serene grandma-friendly setting. 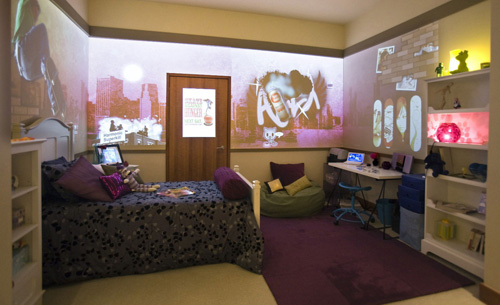 In the Microsoft Home’s teenager room, the decor can be changed momentarily based on the teen’s mood, and social updates appear on the walls keeping the teen up to date on friends’ whereabouts. Image credit: Microsoft

“When we added the room, we recognized it was much too clean — we all know teenagers,” Cluts says. “So we started to make an effort to throw clothes and candy wrappers around.”

Despite purposefully placing prop clutter, Cluts and his teammates would lead a tour only to find the Home’s teenager room was clean again. It took them a while to figure out that the Home’s nightly cleaning crew didn’t realize it was a fake mess and had been cleaning it up.

Not every feature has been a hit. In 2000, Cluts’ team was exploring biometrics and decided to install an iris scanner that would open the front door to authorized eyeballs.

“The eye is 1,000 times more unique than a fingerprint, but people hated it,” Cluts says. “Nobody wanted to stand in front of the door and get their eye scanned.”

“I think at first blush, when people think of the Microsoft Home, they have a picture in their mind of a lot of chrome and steel and plastic,” Cluts says. “While I certainly think there have been a lot of advancements in architecture and design, and that people’s homes will change over time, the fact is that most homes built today still have many elements of those designed and built in 1900.”

The Microsoft Home, he says, should feel very much like people’s real homes, so they can see how technology could be incorporated into their lives without it becoming a “showcase.”

So how close is the Microsoft Home to Microsoft’s vision of the future?

“It’s pretty close, as it’s a place we showcase the vision that I, and others, have been evangelizing,” Mundie says.

For several years, the company has been championing a transition from the graphical user interface (GUI) to the natural user interface (NUI) – using voice, vision, gesture and multi-touch to make computers more like personal assistants than just tools, he says. Kinect for Xbox 360 is a great example of this – it represents several years of research, across three global labs, and enables your computers to simulate and emulate human senses. Kinect, in its first 60 days on the market, also earned a world record for being the fastest-selling consumer electronics device in history.

“We’re on a path for computing to leverage this type of interaction in many other contexts beyond gaming and entertainment,” Mundie says. “The street-level view, pictorial integrated aerial views and the oblique aerial views in Bing Maps are things I first showed in a prototype demo a few years back, and they have also been shown in the Home. These capabilities were pioneered in Microsoft Research and then transferred to the product group. As we embark on this new era in computing, such technologies will only become more powerful and useful.”

In fact, investment in research, technology incubations, and advanced prototyping such as the technology found in the Microsoft Home are priorities Microsoft is focusing on to help bring the future a little closer to reality, Mundie says.

“It’s important to invest in exploring long-term technology trends,” he says. “The Strategic Prototyping Team, working closely with me, is charged with maintaining a forward-looking view and building prototypes so that we can ‘live in the future’ today. The Home allows us to see how new experiences may impact hardware and software design, user interfaces, security and privacy, and more – and socialize those ideas with people inside and outside the company.”