A current focus in global health research is to make medical tests that are not just cheap, but virtually free. One such strategy is to start with paper – one of humanity’s oldest technologies – and build a device like a home-based pregnancy test that might work for malaria, diabetes or other diseases.

“We wanted to go for the simplest, cheapest starting material, and give it more capability,” said Daniel Ratner, a UW assistant professor of bioengineering and lead author of the paper recently published in the American Chemical Society journal Langmuir. “We also wanted to make the system as independent of the end applications as possible, something any researcher could plug into.”

Many paper-based diagnostics are made from nitrocellulose, a sticky membrane used in pregnancy tests and by medical researchers to detect proteins, DNA or antibodies in the human immune system.

Ratner hopes to replace that specialized membrane with cheap, ubiquitous paper, and to use it for any type of medical test – not just the big, biological molecules. 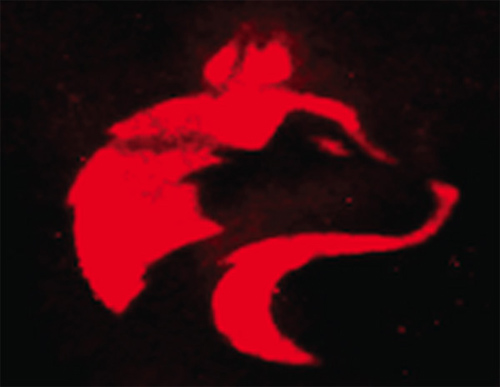 Treated paper can be used to do medical tests. Here, a biomolecule printed in the pattern of the UW mascot binds to a toxic molecule, showing that the toxin is present. Image credit: Dan Ratner, Univ. of Washington

The UW technique uses minimal equipment or know-how. The researchers used a cheap, industrial solvent called divinyl sulfone that can be bought by the gallon and has been used for decades as an adhesive. Ratner’s group discovered they could dilute the chemical in water, carefully control the acidity, then pour it into a Ziploc bag and add a stack of paper, shake for a couple of hours, and finally rinse the paper and let it dry.

The dried paper feels smooth to the touch but is sticky to all kinds of chemicals that could be of medical interest: proteins, antibodies and DNA, for example, as well as sugars and the small-molecule drugs used to treat most medical conditions.

Researchers coat the paper in an industrial solvent, use an inkjet printer to print on biomolecule sensing agents, then perform medical tests. Image credit: Dan Ratner, Univ. of Washington

“We want to develop something to not just ask a single question but ask many personal health questions,” Ratner said. “‘Is there protein in the urine? Is this person diabetic? Do they have malaria or influenza?’”

To test their idea, the researchers ran the treated paper through an inkjet printer where the cartridge ink had been replaced with biomolecules, in this case a small sugar called galactose that attaches to human cells. They printed the biomolecules onto the sticky paper in an invisible pattern. Exposing that paper to fluorescent ricin, a poison that sticks to galactose, showed that the poison was present.

Now that they have proven their concept, Ratner said, they hope other groups will use the paper to develop actual diagnostic tests.

Leading proponents of paper-based diagnostics include the UW’s Paul Yager, a professor of bioengineering who leads the Microfluidics 2.0 initiative, and George Whitesides, a chemistry professor at Harvard University. Ratner’s group is working with a graduate student in Yager’s lab to use the paper to print patterns of switchable networks.

Co-authors are Arthur Yu, Jing Shang at the UW; Fang Cheng, a former UW doctoral student now at China’s Dalian University of Technology; Bradford Paik at the University of Minnesota; and Justin Kaplan and Rodrigo Andrade at Temple University in Philadelphia. The study was funded by the Washington Research Foundation and the UW’s Royalty Research Fund.