Through a new Multidisciplinary University Research Initiative (MURI) awarded by the Air Force Office of Scientific Research, Brown will lead an effort to study new optical materials and their interactions with light at the quantum scale. The initiative, which includes six other top universities, will receive $4.5 million over three years, with a possible two-year extension.

Harnessing the power of light at the quantum scale could clear the way for superfast optical microprocessors, high-capacity optical memory, securely encrypted communication, and untold other technologies. But before any of these potential applications sees the light of day, substantial obstacles must be overcome — not the least of which is the fact that the wavelength of light is larger than quantum-scale objects, limiting the range of possible light-matter interactions. 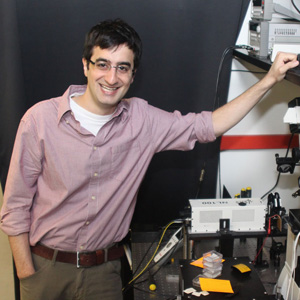 Rashid Zia. “This program will bring together 10 groups and 40-plus researchers ... to help answer questions that we couldn’t have imagined a short time ago. We are very optimistic about where this will lead.” Image credit: Brown University

Rashid Zia, the Manning Assistant Professor of Engineering, will lead the team in addressing these challenges. He spoke recently with science writer Kevin Stacey.

What are you hoping to accomplish with this MURI?

We’re trying to help define an emerging field. The title of the MURI is “Quantum Metaphotonics and Quantum Metamaterials.” Ultimately what we’re trying to do is expand the range of materials and light-matter interactions available for quantum optics.

The field of metamaterials has already expanded the range of optical materials and phenomena available at larger, classical scales. People are doing things with metamaterials that we couldn’t have imagined before. For example, researchers are making metamaterials with negative refractive indices, which can literally bend light backward around objects. Others have used metamaterials to make lenses that can image things smaller than the diffraction limit of traditional lenses. What we’re doing now is asking what happens when we bring these metamaterials down to the scale of quantum emitters — the level of things that can emit a single photon at a time.

Can you talk a bit about the challenges involved in doing this?

When you talk about the way light interacts with matter at the quantum level, the types of interactions and the strength of those interactions are limited by a size mismatch. The optical wavelength is something like 100 times larger than a quantum emitter. For example, a quantum dot — a small bit of semiconductor we can use as a light emitter — is 5 to 10 nanometers. The wavelength of light is on the order of 500 to 1,000 nanometers. The problem is that the quantum dot doesn’t know there’s a wave. It can’t see the spatial variation of the light wave, just its local variation in time. So we need to shrink the wavelength of light to increase our interactions. Or we might increase the wavelength to collectively interact with many quantum emitters. And hopefully we can learn something fundamental about the nature of light that opens up new ways of manipulating these interactions. Those are the types of things we’ll be addressing.

In quantum optics we’re limited in part by the kinds of materials we can use. One of the common materials for quantum optics today is the nitrogen vacancy defect in diamond, so-called diamond NV centers. As you can imagine, diamond is not the cheapest or most scalable technology. The challenge posed for us is how to use the semiconductor materials we use for electronics and extend their optical properties with metamaterial designs, so we can perform quantum optics at wavelengths and with materials commonly used in telecommunications today.

How does the research you’re doing in your lab at Brown fit in?

We just published a paper on this in Nature Communications. Basically, we demonstrated a way to tell how light was emitted, and rather than simply counting the number of photons a system generates, we can tell you which fraction of them came from electric dipoles and which fraction came from magnetic dipoles. This helps us understand fundamental properties about quantum emitters, the source of this light. It might also help us access higher-order light-matter interactions, enabling new ways to modulate light or to trap energy in optical excitations and get it out when you want, which could be useful for things like optical memory.

Who else is involved in this work?

The team includes people who are world-class experts in different areas. Nader Engheta at Penn, Nicholas Fang at MIT, and Xiang Zhang at UC–Berkeley are experts in metamaterials. Harry Atwater at CalTech and Mark Brongersma at Stanford are experts in plasmonics, which is the science of using metal structures to enhance light-matter interactions. Shanhui Fan and Jelena Vuckovic at Stanford are experts in quantum optics. Seth Bank at UT–Austin and Arto Nurmikko and me here at Brown, work on quantum emitters.

It’s really an exciting project. Over the next five years, this program will bring together 10 groups and 40-plus researchers with complementary expertise to help answer questions that we couldn’t have imagined a short time ago. We are very optimistic about where this will lead.