A new species of plant-eating dinosaur with tiny, 1-inch-long jaws has come to light in South African rocks dating to the early dinosaur era, some 200 million years ago.

This “punk-sized” herbivore is one of a menagerie of bizarre, tiny, fanged plant-eaters called heterodontosaurs, or “different toothed reptiles,” which were among the first dinosaurs to spread across the planet.

The single specimen of the new species was originally chipped out of red rock in southern Africa in the 1960s and discovered in a collection of fossils at Harvard University by Paul Sereno, paleontologist and professor at the University of Chicago and National Geographic Explorer-in-Residence. Details of the dinosaur’s anatomy and lifestyle are part of a monograph by Sereno dedicated to these puny herbivores and published in the online journal ZooKeys. 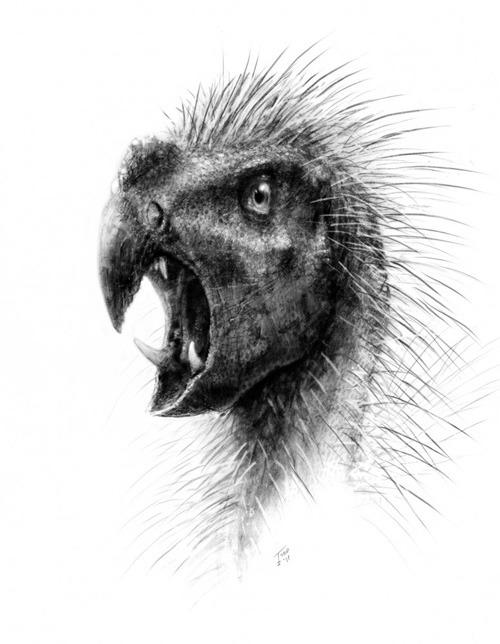 Pegomastax africanus is a new species and features a short, parrot-shaped beak, a pair of stabbing canines and tall teeth for slicing plants. Illustration by Todd Marshall

Named Pegomastax africanus, or “thick jaw from Africa,” the new species had a short, parrot-shaped beak up front, a pair of stabbing canines and tall teeth tucked behind for slicing plants. The tall teeth in its upper and lower jaws operated like self-sharpening scissors, with shearing wear facets that slid past one another when the jaws closed. The parrot-shaped skull, less than 3 inches long, may have been adapted to plucking fruit.

“Very rare,” contended Sereno, “that a plant-eater like Pegomastax would sport sharp-edged, enlarged canines” like that of a vampire. Some scientists have argued that consuming meat, or at the least, insects, was a good part of the diet of heterodontosaurs, which evolved near the root of the great radiation of dinosaurs that included the famous plant-eaters Triceratops and Stegosaurus. 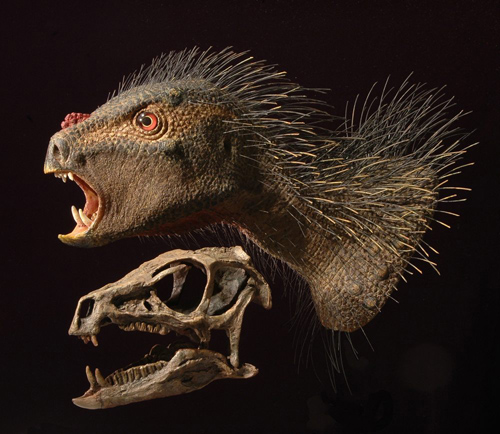 Skin, scales and quills are added to a cast of the skull of Heterodontosaurus, the best-known heterodontosaurid from South Africa. Art by Tyler Keillor

Self-defense and competitive sparring for mates is more likely their role, argues Sereno in the study, based on microscopic examination of the teeth of Pegomastax and kin. Wear facets and chipped enamel suggest that the fangs of Pegomastax and other heterodontosaurs were used like those of living fanged deer for nipping or even digging, rather than slicing flesh.

A bizarre covering of bristles, something like that of a porcupine, likely covered most of the body of Pegomastax, which measured less than 2 feet in length and weighed less than a housecat. These bristles first came to light in a similar-sized heterodontosaur, Tianyulong, discovered recently in China and described in the study. Buried in lake sediment and covered by volcanic ash, Tianyulong preserves hundreds of bristles spread across its body from its neck to the tip of its tail. In life, dwarf-sized heterodontosaurs like Pegomastax would have scampered around in search of suitable plants, said Sereno, looking something like a “nimble, two-legged porcupine.”

Some heterodontosaurids, such as the South African Pegomastax or Chinese Tianyulong (shown here), grew to less than 2 feet in length and rank as dwarfs in the dinosaur era. Illustration by Carol Abraczinskas, Paul Srereno

When Pegomastax lived some 200 million years ago, the supercontinent Pangaea had just begun to split into northern and southern landmasses. Heterodontosaurs appear to have divided similarly, the study argues, the northern species with simple triangular teeth like Tianyulong and the southern species with taller crowns like Pegomastax. 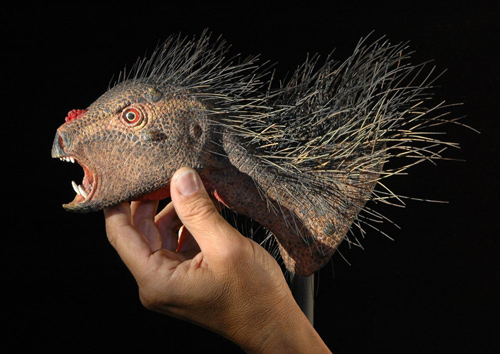 With jaws only 1 inch in length, plant-eating Pegomastax (“thick jaw”) is one of the smallest dinosaurs ever discovered. Art by Tyler Keillor

Sereno marvels at these punk-sized early herbivores that spread across the globe. Although virtually unknown to the public, “Pegomastax and kin were the most advanced plant-eaters of their day.”

About the video: Time-lapse video shows the construction of the Heterodontosaurus flesh model. Credit: Tyler Keillor