Last March, researchers at UCLA reported the development of a molecular compound called CLR01 that prevented toxic proteins associated with Parkinson’s disease from binding together and killing the brain’s neurons.

Building on those findings, they have now turned their attention to Alzheimer’s disease, which is thought to be caused by a similar toxic aggregation or clumping, but with different proteins, especially amyloid-beta and tau.

And what they’ve found is encouraging. Using the same compound, which they’ve dubbed a “molecular tweezer,” in a living mouse model of Alzheimer’s, the researchers demonstrated for the first time that the compound safely crossed the blood–brain barrier, cleared the existing amyloid-beta and tau aggregates, and also proved to be protective to the neurons’ synapses — another target of the disease — which allow cells to communicate with one another.

The report appears in the current online edition of the journal Brain. 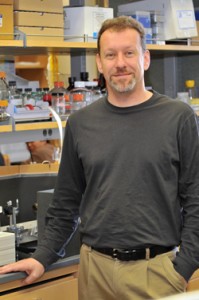 “This is the first demonstration that molecular tweezers work in a mammalian animal model,” said Gal Bitan, an associate professor of neurology at UCLA and the senior author of the study. “Importantly, no signs of toxicity were observed in the treated mice. The efficacy and toxicity results support the mechanism of this molecular tweezer and suggest these are promising compounds for developing disease-modifying therapies for Alzheimer’s disease, Parkinson’s and other disorders.”

Molecular tweezers are complex molecular compounds capable of binding to other proteins. Shaped like the letter “C,” these compounds wrap around chains of lysine, a basic amino acid that is a constituent of most proteins. Bitan and his colleagues, including Aida Attar, first author of the study and a graduate student in Bitan’s lab, have been working with a particular molecular tweezer called CLR01.

In collaboration with scientists at the Università Cattolica in Rome, the researchers, working first in cell cultures, found that CLR01 effectively inhibited a process known as synaptotoxicity, in which clumps of toxic amyloid damage or destroy a neuron’s synapses.

Even though synapses in transgenic mice with Alzheimer’s may shut down and the mice may lose their memory, upon treatment, they form new synapses and regain their learning and memory abilities.

“For humans, unfortunately, the situation is more problematic because the neurons gradually die in Alzheimer’s disease,” Bitan said. “That’s why we must start treating as early as possible. The good news is that the molecular tweezers appear to have a high safety margin, so they may be suitable for prophylactic treatment starting long before the onset of the disease.”

Next, using a radioactive “label,” the researchers were able to confirm that the compound had crossed the mouse’s blood–brain barrier and was effective in clearing the brain of amyloid-beta and tau aggregates.

“This work shows that molecular tweezers do a number of things — they help to ameliorate multiple pathologic features of Alzheimer’s, including amyloid plaques, neurofibrillary tangles and brain inflammation, and our cell culture experiments demonstrated that molecular tweezers block the toxic effect of amyloid-beta on synaptic integrity and communication,” Bitan said.

“We call these unique tweezers ‘process-specific,’ rather than the common protein-specific inhibitors,” he added, meaning the compound only attacks the targeted toxic aggregates and not normal body processes. “That’s a big deal, because it helps confirm evidence that the molecular tweezers can be used safely, ultimately supporting their development as a therapy for humans.”

The next step, Bitan hopes, is to confirm that the tweezers improve memory and not just brain pathology. The researchers say they are working on this question and already have encouraging preliminary data.

There were multiple authors on the study in addition to Bitan and Attar. Please see the study for the complete list.