Nearly one-third of CO2 emissions due to human activities enters the world’s oceans. By reacting with seawater, CO2 increases the water’s acidity, which may significantly reduce the calcification rate of such marine organisms as corals and mollusks, resulting in the potential loss of ecosystems. The extent to which human activities have raised the surface level of acidity, however, has been difficult to detect on regional scales because it varies naturally from one season and one year to the next, and between regions, and direct observations go back only 30 years.

By combining computer modeling with observations, an international team of scientists concluded that anthropogenic CO2 emissions, resulting from the influence of human beings, over the last 100 to 200 years have already raised ocean acidity far beyond the range of natural variations. The study is published in the January 22, 2012 online issue of Nature Climate Change.

The team of climate modelers, marine conservationists, ocean chemists, biologists and ecologists, led by Tobias Friedrich and Axel Timmermann at the International Pacific Research Center at the University of Hawai‘i at Mānoa, came to their conclusions by using Earth system models that simulate climate and ocean conditions 21,000 years back in time, to the Last Glacial Maximum, and forward in time to the end of the 21st century. In their models, they studied changes in the saturation level of aragonite (a form of calcium carbonate) typically used to measure ocean acidification. As acidity of seawater rises, the saturation level of aragonite drops. Their models captured the current observed seasonal and annual variations in this quantity in several key coral reef regions.

Today’s levels of aragonite saturation in these locations have already dropped five times below the pre-industrial range of natural variability. For example, if the yearly cycle in aragonite saturation varied between 4.7 and 4.8, it varies now between 4.2 and 4.3, which – based on another recent study – may translate into a decrease in overall calcification rates of corals and other aragonite shell-forming organisms by 15%. Given the continued human use of fossil fuels, the saturation levels will drop further, potentially reducing calcification rates of some marine organisms by more than 40% of their pre-industrial values within the next 90 years. 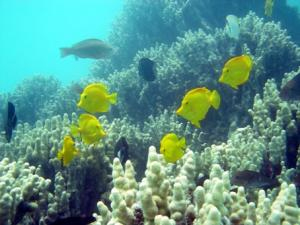 “Any significant drop below the minimum level of aragonite to which the organisms have been exposed to for thousands of years and have successfully adapted will very likely stress them and their associated ecosystems,” said lead author Friedrich.

“In some regions, the man-made rate of change in ocean acidity since the Industrial Revolution is hundred times greater than the natural rate of change between the Last Glacial Maximum and pre-industrial times,” emphasized Friedrich. “When Earth started to warm 17,000 years ago, terminating the last glacial period, atmospheric CO2 levels rose from 190 parts per million (ppm) to 280 ppm over 6,000 years. Marine ecosystems had ample time to adjust. Now, for a similar rise in CO2 concentration to the present level of 392 ppm, the adjustment time is reduced to only 100 – 200 years.”

On a global scale, coral reefs are currently found in places where open-ocean aragonite saturation reaches levels of 3.5 or higher. Such conditions exist today in about 50% of the ocean – mostly in the tropics. By end of the 21st century this fraction is projected to be less than 5%. The Hawaiian Islands, which sit just on the northern edge of the tropics, will be one of the first to feel the impact.

The study suggests that some regions, such as the eastern tropical Pacific, will be less stressed than others because greater underlying natural variability of seawater acidity helps to buffer anthropogenic changes. The aragonite saturation in the Caribbean and the western Equatorial Pacific, both biodiversity hotspots, shows very little natural variability, making these regions particularly vulnerable to human-induced ocean acidification.

“Our results suggest that severe reductions are likely to occur in coral reef diversity, structural complexity and resilience by the middle of this century,” said co-author Timmermann.

An animation showing the changes in aragonite surface saturation level from 1800 to 2100 is available at https://iprc.soest.hawaii.edu/users/tobiasf/Outreach/OA/Ocean_Acidification.html. The animation is also playing at the Science on a Sphere in the Jhamandas Watumull Planetarium at the Bishop Museum in Honolulu.

This study was funded by The Nature Conservancy (www.nature.org), the Japan Agency for Marine-Earth Science and Technology (JAMSTEC) through its sponsorship of the International Pacific Research Center, and National Science Foundation grant #0902551.

*Source: University of Hawaiʻi at Manoa