Religion: Convergence of Cultures or Clash of Creeds?

With the beginning of Ramadan, the Ninth Month of the Islamic Calendar, come hot debates, as to whether Moslems should be allowed to slit the throats of sheep in public, to make the call to prayer (Adhan) in non-Moslem communities, to build a Mosque near Ground Zero.

Religion provides an excellent banner for an “us and them” conflict, where the higher the value of the “them”, the greater the justification of “us”. While sport, and particularly soccer, constitute an easy-to-grasp graphic opportunity to associate with one side or the other on a primary level (the colours of many soccer teams are the primary red, blue or green), religion, being supra-human, is that much more powerful a vehicle to define who we are, how we behave and what we believe.

There is a reason for everything – the reference to religion or health after the sneeze (it was the first sign of Bubonic Plague), the covering of the mouth during the yawn (so that the soul does not escape and the Devil does not enter), the superstition surrounding Friday 13 (Jesus was crucified on a Friday and there were 13 people at the Last Supper).

And there is a reason for religion, namely to temper the human spirit of ambition, so necessary for our survival; the notion was created that there is something superior to us, so whoever you are and however high you might be, there is something even greater and your end will be the same as the beggar on the street. 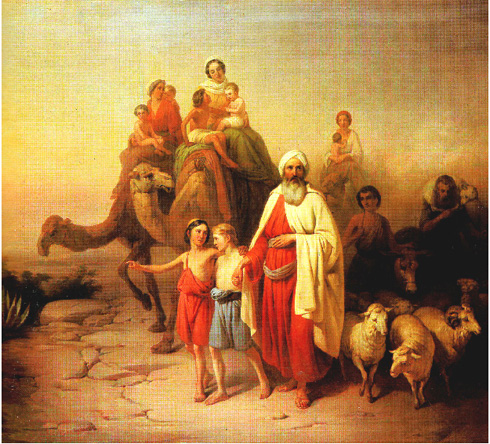 About the image: The patriarch Abraham (by József Molnár). Image credit: Wikipedia

Note the words “our” and “us” because if within religions rules are drawn for behaviour within a certain society (this is what we do and we meet regularly to stress the point) then on a planetary scale we are all equal before God, or before Mother Nature.

This message does not go down very well with those who wish to perpetuate conflict by abusing religion, whether it be Islamist blasphemers who warp the noble precepts of the Koran, Jewish Zealots who are criticised in the Talmud, or Christian Crusaders civilizing the world with the Bible and the Bullet (against every single norm in the New Testament) – or crying out against the construction of the Mosque near 9/11.

Therefore with the start of Ramadan, it is important that people understand its finer cultural and social aspects. Ramadan is basically a concentration upon God, a month of fasting between dawn and dusk, a month of prayer and introspection, and a month of charity. It is a month of giving. It was the month in which the first verses of the Koran were revealed to the Prophet Mohammed.

Charity and Peace are fundamental aspects of the Islamic faith. Abuse of religious texts and bad journalism create sweeping nonsensical beliefs that Islamic is the same as Islamist (extremists) while the reality is that the supposed perpetrators of 9/11 were the antithesis of the religion they were supposed to have defended. In religions terms, 9/11 does not make sense.

And here we reach the crux of the matter: obviously, religions should be a convergence of cultures and not a clash of creeds. And that is why, along with education, common sense comes into the equation.

The words of President Barack Obama regarding the issue surrounding the construction of a Mosque near Ground Zero sum up the way in which the civilized and educated world should think: “This is America and our commitment to religious freedom must be unshakable”

However, discipline and doctrine can create flash points, and these are the chink in the armour so easy to exploit by those who foster their own position through the manipulation of religion. How provocative is it, or how provocative should it be, for a woman to wear a burqah in public, in Afghanistan, in Tel Aviv, in Paris? Or for a muezzin to call out the Adhan, loudly, at first light, in Riyadh, in Tanger, in Madrid? Or for the right to perform the Thabiha (ritual slaughter of an animal) on a lamb in Damascus, or Detroit, or Moscow? Or indeed how provocative is it for that infernal din of the church bells on a Sunday morning to wake those Saturday night revellers…in London, in Tirana or in Cairo?

“Yo soy yo y mi circunstancia” (I am myself and what surrounds me) said Ortega y Gasset. I believe that by leaving it here, the words of this Spanish philosopher and writer have said it all.