Scientists have discovered a new window into the Earth’s violent past. Geochemical evidence from volcanic rocks collected on Baffin Island in the Canadian Arctic suggests that beneath it lies a region of the Earth’s mantle that has largely escaped the billions of years of melting and geological churning that has affected the rest of the planet. Researchers believe the discovery offers clues to the early chemical evolution of the Earth.

The newly identified mantle “reservoir,” as it is called, dates from just a few tens of million years after the Earth was first assembled from the collisions of smaller bodies. This reservoir likely represents the composition of the mantle shortly after formation of the core, but before the 4.5 billion years of crust formation and recycling modified the composition of most of the rest of Earth’s interior.

“This was a key phase in the evolution of the Earth,” says co-author Richard Carlson of the Carnegie Institution’s Department of Terrestrial Magnetism. “It set the stage for everything that came after. Primitive mantle such as that we have identified would have been the ultimate source of all the magmas and all the different rock types we see on Earth today.”

Carlson and lead author Matthew Jackson (a former Carnegie postdoctoral fellow, now at Boston University), with colleagues, using samples collected by coauthor Don Francis of McGill University, targeted the Baffin Island rocks, which are the earliest expression of the mantle hotspot now feeding volcanic eruptions on Iceland, because previous study of helium isotopes in these rocks showed them to have anomalously high ratios of helium-3 to helium-4.

Helium-3 is generally extremely rare within the Earth; most of the mantle’s supply has been outgassed by volcanic eruptions and lost to space over the planet’s long geological history. In contrast, helium-4 has been constantly replenished within the Earth by the decay of radioactive uranium and thorium.

The high proportion of helium-3 suggests that the Baffin Island lavas came from a reservoir in the mantle that had never previously outgassed its original helium-3, implying that it had not been subjected to the extensive chemical differentiation experienced by most of the mantle. 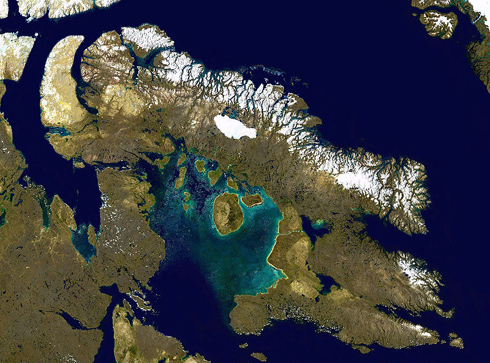 The researchers confirmed this conclusion by analyzing the lead isotopes in the lava samples, which date the reservoir to between 4.55 and 4.45 billion years old. This age is only slightly younger than the Earth itself. The early age of the mantle reservoir implies that it existed before melting of the mantle began to create the magmas that rose to form Earth’s crust and before plate tectonics allowed that crust to be mixed back into the mantle.

Many researchers have assumed that before continental crust formed the mantle’s chemistry was similar to that of meteorites called chondrites, but that the formation of continents altered its chemistry, causing it to become depleted in the elements, called incompatible elements, which are extracted with the magma when melting occurs in the mantle. “Our results question this assumption,” says Carlson. “They suggest that before continent extraction, the mantle already was depleted in incompatible elements compared to chondrites, perhaps because of an even earlier Earth differentiation event, or perhaps because the Earth originally formed from building blocks depleted in these elements.”

Of the two possibilities, Carlson favors the early differentiation model, which would involve a global magma ocean on the newly-formed Earth. This magma ocean produced a crust that predated the crust that exists today. “In our model, the original crust that formed by the solidification of the magma ocean was buoyantly unstable at Earth’s surface because it was rich in iron,” he says. “This instability caused it to sink to the base of the mantle, taking the incompatible elements with it, where it remains today.”

Some of this deep material may have remained liquid despite the high pressures, and Carlson points out that seismological studies of the deep mantle reveal certain areas, one beneath the southern Pacific and another beneath Africa, that appear to be molten and possibly chemically different from the rest of the mantle. “I’m holding out hope that these seismically imaged areas might be the compositional complement to the “depleted” primitive mantle that we sample in the Baffin Island lavas,” he says.

The paper is published in the August 12 issue of Nature.