COLUMBIA, Mo. — Understanding how thoughts of mortality influence individuals’ beliefs sheds light on the commonalities among different groups’ motivations and could help ease tensions between opposing viewpoints, according to University of Missouri experiments that tested the relationship between awareness of death and belief in a higher power. The study found that thoughts of death increased atheists, Christians, Muslims and agnostics conviction in their own world views. For example, contrary to the wartime aphorism that there are no atheists in foxholes, thoughts of death did not cause atheists to express belief in a deity.

“Our study suggests that atheists’ and religious believers’ world views have the same practical goal,” said Kenneth Vail, lead author and doctoral student in psychological science in MU’s College of Arts and Science. “Both groups seek a coherent world view to manage the fear of death and link themselves to a greater and immortal entity, such as a supreme being, scientific progress or a nation. If people were more aware of this psychological similarity, perhaps there might be more understanding and less conflict among groups with different beliefs.” 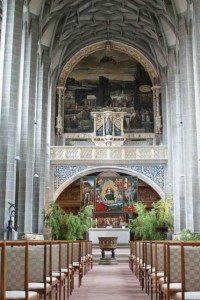 His research suggests that morbid imagery, such as news headlines or caricatures of enemies in war propaganda, can reinforce nationalistic and/or religious ideals by keeping death on the mind and subconsciously encouraging denial of opposing ideologies. This research suggests that religious symbols and stories involving death, such as the crucifix, function psychologically to remind the faithful of mortality and subconsciously reinforce one particular world view to the exclusion of others.

For the study, Vail and his colleagues conducted a series of three experiments by first encouraging thoughts of death in study participants and analyzing their responses to a questionnaire. The first experiment examined Christians and atheists in the United States. The results suggested awareness of death in Christians increased their belief in God and denial of other traditions. Atheists also continued to adhere to their world views, although no increase in denial of other philosophies was observable because atheists by definition started with no belief in any religious traditions.

The second experiment, conducted in Iran, found that Muslims reacted similarly to Christians when they were thinking about their own mortality. A third trial observed agnostics and found that thoughts of death tended to increase their belief in a higher power. However, unlike Christians and Muslims, they did not increase their denial of Buddha, God, Jesus or Allah. Instead agnostics increased acceptance of all of those world views.

“In our study, individuals’ minds appeared to rally around certain personal guiding concepts when faced with fear of death,” said Vail. “Agnostics seemed to hedge their spiritual bets. They believed more firmly in a higher power. Yet at the same time, they expressed continued belief that the specific nature of that power was beyond human knowledge.”

The study, “Exploring the Existential Function of Religious and Supernatural Agent Beliefs Among Christians, Muslims, Atheists and Agnostics,” was published in the journal Personality and Social Psychology Bulletin. Co-authors were Jamie Arndt, MU professor of psychological sciences, and Abdolhossein Abdollahi of the Islamic Azad University in Iran.