Yale University scientists have found a way to observe quantum information while preserving its integrity, an achievement that offers researchers greater control in the volatile realm of quantum mechanics and greatly improves the prospects of quantum computing.

Quantum computers would be exponentially faster than the most powerful computers of today.

“Our experiment is a dress rehearsal for a type of process essential for quantum computing,” said Michel Devoret, the Frederick William Beinecke Professor of Applied Physics & Physics at Yale and principal investigator of research published Jan. 11 in the journal Science. “What this experiment really allows is an active understanding of quantum mechanics. It’s one thing to stare at a theoretical formula and it’s another thing to be able to control a real quantum object.”

In quantum systems, microscopic units called qubits represent information. Qubits can assume either of two states — “0” or “1” — or both simultaneously. Correctly recognizing, interpreting, and tracking their state is necessary for quantum computing. However, the act of monitoring them usually damages their information content. 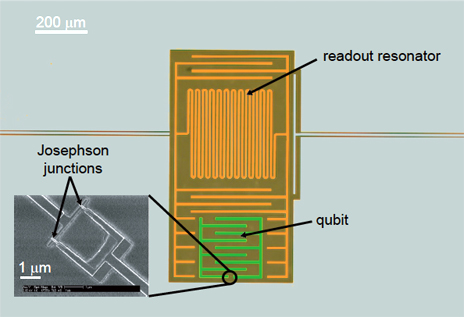 The Yale physicists successfully devised a new, non-destructive measurement system for observing, tracking and documenting all changes in a qubit’s state, thus preserving the qubit’s informational value. In principle, the scientists said, this should allow them to monitor the qubit’s state in order to correct for random errors.

“As long as you know what error process has occurred, you can correct,” Devoret said. “And then everything’s fine. You can basically undo the errors.”

“That’s the key,” said Michael Hatridge, a postdoctoral associate in physics at Yale and lead author of the Science paper, “the ability to talk to the qubit and hear what it’s telling you.”

He continued: “A major problem with quantum computing is the finite lifetime of information stored in the qubits, which steadily decays and which must be corrected. We now know that it is possible to do this correction by feedback involving a continuous measurement. Our work advances the prospects of large-scale quantum computers by opening the door to continuous measurement-based quantum feedback.”

The Yale physicists successfully measured one qubit. The challenge ahead is to measure and control many at once, and the team is developing ultra-fast digital electronics for this purpose.

“We are on the threshold between the ability to measure and control one or two qubits, and many,” Hatridge said.

Support for the research was provided by the National Science Foundation, the United States Army Research Office, the Intelligence Advanced Research Projects Activity, the Agence National de Recherche, and the College de France.