The Supernova That Cried Wolf

A luminous supernova in a galaxy 67 million light years away from us has finally exploded for good, a UA-led team of astronomers has discovered. This event sheds light on how massive stars end their lives.

Astronomers have announced that a massive star, which they have watched repeatedly mimic a supernova since 2009, has finally exploded for real.

The report was presented at the American Astronomical Society meeting in Long Beach, Calif. by Jon Mauerhan of the Steward Observatory at the University of Arizona, in collaboration with Nathan Smith, also of the UA, and Alex Filippenko of the University of California, Berkeley.

The result is of special interest because it provides new critical information on the final death throes of massive stars in the years leading up to their explosion. The work has been accepted for publication in the Monthly Notices of the Royal Astronomical Society.

The object is SN 2009ip, a luminous extragalactic transient first detected in 2009 in the spiral galaxy NGC 7259, which lies 67 million light-years away in the constellation Piscis Austrinus. A “transient” is an astronomical object that can be observed for a short time. Soon after discovery in 2009, the outburst of SN 2009ip actually was recognized to be a non-terminal event, one in which the star in question survived.

Investigation into existing data archives revealed that the stellar progenitor of this outburst had been serendipitously detected in multiple images of host galaxy taken throughout the decade prior to discovery. Detailed analysis of those images determined that the star was blue and hot, emitted about 1 million times as much energy as the sun, contained 50-80 suns worth of mass, and varied wildly in brightness.

Such objects are known as luminous blue variables, or LBVs, stars that have nearly exhausted their hydrogen fuel and, for reasons that are poorly understood, undergo brief recurrent episodes of explosive mass loss. The most famous example of this phenomenon in our own galaxy is the star Eta Carinae, an object that underwent a luminous outburst in 1843, witnessed by astronomer Sir John Herschel. 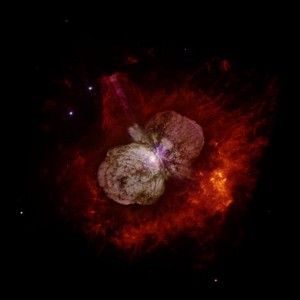 A huge, billowing pair of gas and dust clouds are captured in this NASA Hubble Space Telescope image of the supermassive star Eta Carinae. Almost hidden in the center, this star suffered a giant outburst about 160 years ago, when it became one of the brightest stars in the southern sky. Though the star released as much visible light as a supernova explosion, it survived the outburst. The explosion produced two lobes and a large, thin equatorial disk, all moving outward at about 1 million kilometers per hour. The new SN 2009ip result suggests that stars like Eta Carinae could potentially blow up at any time. Photo by: Nathan Smith/NASA. (Click image to enlarge)

Modern high-powered observations of the location of this historic event, including studies involving the Hubble Space Telescope, have revealed an expanding nebula containing more than 10 suns worth of material hurling into surrounding space at a velocity of approximately 600 kilometers per second.

LBV outbursts are so luminous that they can be seen at extragalactic distances. Since their radiation characteristics mimic true supernovae, they are sometimes referred to as supernova “impostors.” SN 2009ip was one such impostor. Its initial outburst lasted for one to two weeks and ejected an envelope of hydrogen-rich mass at a speed of roughly 600 kilometers per second (373 mps), as determined by measurements of the object’s light spectrum.

One year after the initial outburst, a second, similar event was detected, and also faded quite rapidly. Then, after nearly two years of subsequent quiescence, a third outburst was detected on July 24, 2012. But this time, the situation was different. Instead of fading within days of the outburst, the source maintained its luminosity for much longer.

After about two months, the object began to exhibit evidence for very fast material in its spectrum. Instead exhibiting expansion velocities of 600 kilometers per second, like the impostor eruptions in 2009 and 2010, the bulk velocity of the hydrogen-rich material during the 2012 event had reached values closer to 10,000 kilometers per second. The spectral velocity measurements were made using Steward Observatory’s Bok telescope.

“The detection of material moving this fast was our first indication that SN 2009ip had finally exploded for real,” Mauerhan said, “but we were a bit puzzled by the fact that the brightness of SN 2009ip had not yet reached typical supernova luminosities.”

However, noting that the prior impostor eruptions in 2009 and 2010 had launched matter into space at much slower velocities than the supernova explosion, Mauerhan and Smith predicted that a violent collision likely would occur once the fast supernova material caught up with the outer, slower material, from the prior impostor events in 2009 and 2010. Just days later, that’s exactly what happened.

On Sept. 22, the impact occurred and generated a factor-of-100 increase in brightness at visual wavelengths. The brightness measurements were obtained using Lick Observatory’s Nickel telescope.

“At this point, it is difficult to deny that a true supernova has occurred,” said Mauerhan. SN 2009ip continued to brighten for two weeks. After peaking out, the source began a gradual decline in brightness, and has been fading ever since. Mauerhan added that it is entirely possible that the supernova will encounter more shells of impostor debris as it expands, and may produce additional temporary increases in brightness. “We have every reason to keep watching SN 2009ip.”

“The fact that SN 2009ip exploded while in the LBV phase is extremely interesting, as the situation is at odds with standard stellar evolutionary theory,” Mauerhan explained.

Standard theory predicts that stars with initial masses greater than about 30 suns will shed most or all of their hydrogen envelopes via strong winds and outbursts and become helium-rich Wolf-Rayet stars before exploding as supernovae. SN 2009ip confirms a long-held suspicion that stars can actually blow up in the LBV phase, before becoming Wolf-Rayet stars.

This is important in the context of Eta Carinae in our own galaxy. The SN 2009ip result suggests that stars like Eta Carinae could potentially blow up at any time.

“When Eta Carinae finally does blow up, it’s going to be quite a display,” Mauerhan said. Similar to the case of SN 2009ip, the fast explosion will ram into the more than 10 solar masses of material ejected by the star during its earlier outbursts, which will result in a very luminous explosion that could likely be visible from Earth during the daylight.

For SN 2009ip, many questions remain, as the physical mechanism responsible for the star’s pre-supernova outbursts is an open question. Several possibilities are on the table.

For example, since the progenitor star of SN 2009ip was very massive, it is a potential candidate for a physical process called “pair-instability mechanism,” occurring deep in the hot core of the massive star. In this process, the collision of high-energy gamma rays with atomic nuclei can result in the creation of electron-positron pairs, which reduces the thermal pressure inside the star. This reduction in pressure is followed by gravitational contraction of the core, which drives the temperatures and pressures up even further, accelerating the rate of nuclear reactions. The sudden nuclear energy release can potentially lead to giant outbursts.

Theory predicts that a massive star can endure several such pair-instability outbursts before finally exploding as a supernova, and this is a possibility for SN 2009ip.

Alternatively, the pre-supernova activity of SN 2009ip could be related to the latest stages of nuclear burning. After burning up all the hydrogen fuel in their cores, massive stars begin to fuse helium, followed by successive phases of carbon, neon, oxygen and silicon burning, which eventually results in the formation of an iron core. After this point, the star cannot support itself against gravity via the fusion of iron, so the star collapses and produces a supernova.

The preceding stages of neon, oxygen and silicon burning all occur within several years of iron core creation, and the ignition of these phases could result in brief energetic outbursts of mass experienced by the star in the years before it goes supernova.

Discriminating between such processing is very difficult from an observational standpoint, but SN 2009ip could offer potential clues as it fades. Radioactive material synthesized in the actual explosion of an iron core slowly decays over the course of a year and generates light with a characteristic fading time.

Said Mauerhan: “We will certainly be watching SN 2009ip closely to elucidate the nature of this unprecedented explosion.”