Call it a bird’s eye view of migration. Scientists are taking a fresh look at animal movement with a big data approach that combines GPS tracking data with satellite weather and terrain information.

“This is a powerful tool for understanding how weather and land forms affect migration patterns,” Kays said. “Ultimately it will help us answer global questions about how changes to our planet affect animal populations and movement.” 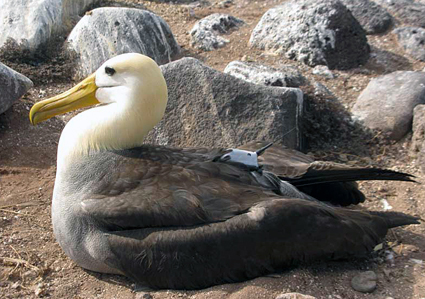 The publicly available system is sophisticated enough for ecologists and simple enough for budding scientists, including North Carolina science fair entrants, who are using it to track the movements of great egrets along the East Coast. Scientific users can share their data or limit access, depending on the project.

In a case study of the system’s application, researchers used Env-DATA to analyze the flight paths of the Galapagos Albatross. In addition to GPS tracking of individual birds, scientists collected satellite data on weather patterns and glowing chlorophyll concentrations in the ocean associated with food sources, captured in a YouTube video. Scientists learned that the birds’ chosen paths took them to preferred areas on the Peruvian coast where they could forage. The albatrosses took a clockwise route that allowed them to take advantage of tailwinds on much of the long journey.

In addition to allowing scientists to work with layers of information, Env-DATA simplifies the tedious work of data manipulation. Tasks that used to take graduate students countless hours now require only a click of the mouse, Kays said.

The Env-DATA team was led by Dr. Gil Bohrer from Ohio State University and includes researchers from the Max Planck Institute for Ornithology in Germany, the U.S. Geological Survey in Alaska, the University of Illinois at Urbana-Champaign, Lafayette College and the University of Konstanz in Germany.