A pioneering Cornish research partnership is providing invaluable information to the UK’s shellfish industry by improving understanding of what seafood people choose to eat and why.

University of Exeter Medical School PhD student, Nick Boase, is conducting surveys across the country to shed light on what people understand about shellfish, and uncover reasons why they might shy away from consuming produce grown in the UK. 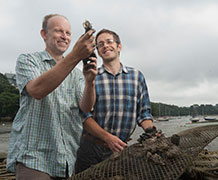 The shellfish industry is an important part of both the UK and Cornish economies, with landings totalling £10 million in Cornwall in 2013. Whilst the UK exports large amounts of shellfish across Europe – including crabs, oysters, mussels, scallops and lobsters – hardly any of our domestically caught produce ends up on plates at home.

Supported by ESF Convergence and working closely with specialist scientific consultants to the water industry, Aquatic Water Services, Nick is hoping this research will help shellfish producers expand domestic demand and provide a boost to the economies of both the South West and UK.

Nick said “Much of the shellfish produced in the UK is exported. Compared to other foods such as beef, pork and chicken, shellfish consumption in the UK is a niche market. Whilst it’s high in protein and relatively energy efficient to produce, we think that a lack of awareness about the benefits of shellfish, and misconceptions about its safety, may be putting people off.”

The study has involved a series of in-depth interviews with a range of people, from fishermen and food processors, to retailers and the public, and early analysis has already highlighted several intriguing findings.

Some participants suggested feeling excluded from ‘posh’ shellfish like oysters and lobster, whilst others admitted that they knew very little about how shellfish were produced and harvested. Others cited common myths about the potential toxic nature of some crustaceans, such as ‘dead man’s fingers’ in crabs.

Working with a number of stakeholders, the next stage of the project will piece together different forms of communication to help educate the public about shellfish, and assess the most effective ways to boost people’s knowledge about the food source.

Ultimately, Nick wants the findings of this study to benefit every part of shellfish production,

“We’re developing findings that will help Aquatic Water Services to enhance the support they offer to producers and suppliers, but we also want to make sure our results can be used across the industry. The study acts as a looking glass for the shellfish supply chain, allowing reflection on perceptions and common misconceptions. Our findings have the potential to inform how the industry effectively demonstrates good manufacturing practice and quality assurance.”

More information about this project is available at www.ecehh.org/research-projects/from-sea-to-saucepan