A new University of Colorado Boulder-led study appears to answer contentious questions about the onset and cause of Earth’s Little Ice Age, a period of cooling temperatures that began after the Middle Ages and lasted into the late 19th century.

According to the new study, the Little Ice Age began abruptly between A.D. 1275 and 1300, triggered by repeated, explosive volcanism and sustained by a self- perpetuating sea ice-ocean feedback system in the North Atlantic Ocean, according to CU-Boulder Professor Gifford Miller, who led the study. The primary evidence comes from radiocarbon dates from dead vegetation emerging from rapidly melting icecaps on Baffin Island in the Canadian Arctic, combined with ice and sediment core data from the poles and Iceland and from sea ice climate model simulations, said Miller.

While scientific estimates regarding the onset of the Little Ice Age range from the 13th century to the 16th century, there is little consensus, said Miller.  There is evidence the Little Ice Age affected places as far away as South America and China, although it was particularly evident in northern Europe. Advancing glaciers in mountain valleys destroyed towns, and famous paintings from the period depict people ice skating on the Thames River in London and canals in the Netherlands, waterways that were ice-free in winter before and after the Little Ice Age.

“The dominant way scientists have defined the Little Ice Age is by the expansion of big valley glaciers in the Alps and in Norway,” said Miller. “But the time it took for European glaciers to advance far enough to demolish villages would have been long after the onset of the cold period,” said Miller, a fellow at CU’s Institute of Arctic and Alpine Research. 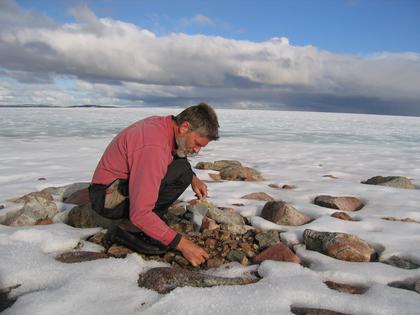 Most scientists think the Little Ice Age was caused either by decreased summer solar radiation, erupting volcanoes that cooled the planet by ejecting shiny aerosol particles that reflected sunlight back into space, or a combination of both, said Miller.

The new study suggests that the onset of the Little Ice Age was caused by an unusual, 50-year-long episode of four massive tropical volcanic eruptions. Climate models used in the new study showed that the persistence of cold summers following the eruptions is best explained by a sea ice-ocean feedback system originating in the North Atlantic Ocean.

“This is the first time anyone has clearly identified the specific onset of the cold times marking the start of the Little Ice Age,” said Miller.  “We also have provided an understandable climate feedback system that explains how this cold period could be sustained for a long period of time.  If the climate system is hit again and again by cold conditions over a relatively short period — in this case, from volcanic eruptions — there appears to be a cumulative cooling effect.”

As part of the study, Miller and his colleagues radiocarbon-dated roughly 150 samples of dead plant material with roots intact collected from beneath receding ice margins of ice caps on Baffin Island.  There was a large cluster of “kill dates” between A.D. 1275 and 1300, indicating the plants had been frozen and engulfed by ice during a relatively sudden event.

Both low-lying and higher altitude plants all died at roughly the same time, indicating the onset of the Little Ice Age on Baffin Island — the fifth largest island in the world — was abrupt. The team saw a second spike in plant kill dates at about A.D. 1450, indicating the quick onset of a second major cooling event.

To broaden the study, the team analyzed sediment cores from a glacial lake linked to the 367-square-mile Langjökull ice cap in the central highlands of Iceland that reaches nearly a mile high. The annual layers in the cores — which can be reliably dated by using tephra deposits from known historic volcanic eruptions on Iceland going back more than 1,000 years — suddenly became thicker in the late 13th century and again in the 15th century due to increased erosion caused by the expansion of the ice cap as the climate cooled, he said.

“That showed us the signal we got from Baffin Island was not just a local signal, it was a North Atlantic signal,” said Miller.  “This gave us a great deal more confidence that there was a major perturbation to the Northern Hemisphere climate near the end of the 13th century.” Average summer temperatures in the Northern Hemisphere did not return to those of the Middle Ages until the 20th century, and the temperatures of the Middle Ages are now exceeded in many areas, he said.

The models showed sustained cooling from volcanoes would have sent some of the expanding Arctic sea ice down along the eastern coast of Greenland until it eventually melted in the North Atlantic.  Since sea ice contains almost no salt, when it melted the surface water became less dense, preventing it from mixing with deeper North Atlantic water.  This weakened heat transport back to the Arctic and creating a self-sustaining feedback system on the sea ice long after the effects of the volcanic aerosols subsided, he said.

“Our simulations showed that the volcanic eruptions may have had a profound cooling effect,” says NCAR scientist Bette Otto-Bliesner, a co-author of the study. “The eruptions could have triggered a chain reaction, affecting sea ice and ocean currents in a way that lowered temperatures for centuries.”

The researchers set the solar radiation at a constant level in the climate models, and Miller said the Little Ice Age likely would have occurred without decreased summer solar radiation at the time. “Estimates of the sun’s variability over time are getting smaller, it’s now thought by some scientists to have varied little more in the last millennia than during a standard 11-year solar cycle,” he said.

One of the primary questions pertaining to the Little Ice Age is how unusual the warming of Earth is today, he said.  A previous study led by Miller in 2008 on Baffin Island indicated temperatures today are the warmest in at least 2,000 years.