They Know The Drool

*The search for biomarkers of disease in spit*

A team of University of Minnesota researchers is in hot pursuit of that goal, using one of the simplest means imaginable: testing spit. They’ve discovered that conditions such as breast and oral cancer leak certain proteins into saliva, and if detected, such proteins can be “biomarkers” for the disease. 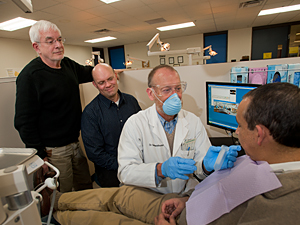 “This would be an easy way to monitor oral cancer,” says Timothy Griffin, an associate professor of biochemistry, molecular biology and biophysics. “Every year in the United States there are about 40,000 cases, more than cervical or ovarian cancer, melanoma, or lymphoma, and it has a higher mortality.”

Saliva contains at least 2,000 proteins, but the most abundant ones tend to be the least informative, he notes. But he and his colleagues have become the world experts on snagging rare proteins from spit and detecting both their presence and their abundance.

In a study of 10 women with metastatic breast cancer, the researchers sifted through their salivary proteins and found a handful that were already known to seep into the blood of women with this cancer. The proteins appeared only at very low levels in saliva of healthy controls.

“The next idea is, can you take this back through the earlier stages to detect nonmetastatic cancer?” says Griffin.

Biomarker proteins also appear in saliva of patients with oral cancer. Team members Frank Ondrey, an otolaryngology professor who collects tissue samples from volunteers, and oral cancer expert Nelson Rhodus of the Department of Diagnostic and Biological Sciences have been invaluable in figuring out the basic biology of this phenomenon.

The team found that two major structural proteins in cells—the proteins actin and myosin—were more abundant in the saliva of patients with malignant oral lesions than in those with pre-malignant ones. The proteins could come from epithelial cells of the cheek lining.

Rhodus devised a way to collect fluid straight from an oral lesion so that proteins unique to lesions can be identified. Any that subsequently turn up in spit could then be easily collected and analyzed as a way of monitoring activity in a lesion.

“About 35 percent of lesions turn to cancer,” says team member John Carlis, a professor of computer science and engineering who relishes the herculean task of analyzing the data. “We’re following protein profiles in the saliva of about 40 patients with [noncancerous lesions] that Nelson brings in.”

The team has carved out a distinct niche in the world of proteomics—the large-scale study of proteins.

“We’re the world leader in doing in-depth proteomics as applied to saliva,” says Rhodus. “It would be great if we could eventually separate out lethal and nonlethal cancers, oral inflammation, and other conditions. Probably, there’s a specific protein signature for each condition that appears in saliva at a specific time during its development.”

All this is part of an effort to develop a clinical spit test. Now, the only way to catch oral cancer before it strikes is to keep biopsying a patient’s oral lining, sometimes every couple of months over several years. This is hardly pleasant, so it’s no wonder many people with benign-looking lesions forego the follow-up.

“We’re to the point of going from discovering biomarkers to validating them,” says Griffin. “Ultimately, the goal would be if somebody goes to Nelson’s clinic with a suspicious lesion, he can run a saliva sample through a machine and tell whether it’s trouble or not.”