REDMOND, Wash. – March 31, 2011 – While Microsoft Advertising was busy on Wednesday helping T-Mobile stream a live Ellie Goulding concert across three screens, a first for both companies, CEO Steve Ballmer was thinking of the next big opportunity in advertising.

Microsoft has “a deep drive, commitment, and a lot of great work going on in all of our great brands to let our clients and consumers take advantage of the next generation of technology,” said Ballmer, speaking Wednesday at Microsoft’s Imagine 2011 marketing leadership summit.

Ballmer said the amount of money companies spend on digital advertising continues to grow, as do the opportunities to innovate, most notably on Kinect for Xbox 360. At Microsoft, this innovation has intersected with major consumer brands, whether it’s Chevrolet Volt appearing in the Kinect game “Joyride” or an original web series from Wendy’s that appears on MSN.

“We’re just scratching at the surface,” Ballmer said. The speed of innovation is accelerating like no other industry, which doesn’t always make life easy for marketers and advertisers, he said. “It’s like that line out of the Woody Allen movie ‘Annie Hall’ about relationships between men and women – relationships are like sharks, they either move forward or they die.”

This week Microsoft is showcasing the future of advertising opportunities via platforms such as Kinect, the PC and mobile phones, and by using Microsoft technology to bring advertising to consumers in a way they like and voluntarily agree to consume. 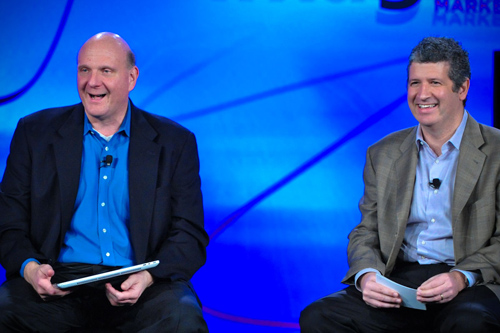 Ballmer spoke on Wednesday, as did other Microsoft executives, professors, and global business leaders from companies such as Coca-Cola and eBay.com. Today attendees will hear from speakers including filmmakers Ron Howard and Brian Grazer, who will talk about “the art of imagination.”

This new shift in advertising is already happening, said Darren Huston, Microsoft’s corporate vice president of Consumer and Online at Microsoft, who pointed to Chevrolet Volt appearing in the Kinect game “Joyride” or an original web series from Wendy’s that appears on MSN.

Microsoft is ready to help bring old and new brands into the new digital advertising world, and showing a concert over three screens at once is just one example of how the company can help advertisers, he said.

“For us, it’s important to connect consumers to experiences,” Huston said. “That is what’s driving us, and that’s what advertisers want – they want to follow the consumer. Having your message show up in different contexts is a very positive, almost multiplicative thing – in Xbox and Kinect, on MSN, on Bing. That funnel of awareness and consideration across multiple screens – advertisers want us to help them connect those dots.” 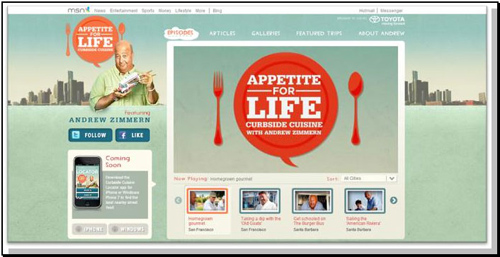 This week, Microsoft is connecting the dots for advertisers by using real examples of what they will be able to do, and not just in the future.

Microsoft Advertising wants to rethink and reinvent everything about digital advertising, from things as simple as banner ads, to better targeting and customizing ad experiences for consumers to make them relevant, to creating cutting-edge experiences made possible by products such as Kinect, Huston said.

“Now that we have Kinect, what could we do with Pizza Hut to let people order a pizza using their hands, or with Macy’s to let them try on clothing using Kinect?” Huston said. “There’s a ton of innovation happening in our group, and it’s a growing and important part of who we are becoming as a company. It’s an absolutely critical business. We don’t just sell software licenses anymore.”

The future of digital advertising and marketing will, at its best, include experiences that are valuable both to advertisers and to consumers, said Stephen Kim, general manager of Global Creative Solutions for Microsoft Advertising. It’s a changing industry, and sometimes challenging to get companies to change their approach to how they market and advertise themselves.

“We want to show them what the possibilities are,” Kim said. “You can run a 30-second spot on television during ‘Modern Family’ and that’s great and reaches certain people. Or with the same budget, you can drive a deeper, more creative impact going digital, and that is something we’re well-positioned to demonstrate over the next few days.”

Just as the industry is evolving, so too has the annual event that was once called the Strategic Account Summit and is now called Imagine, he said. The event, which took the last two years off, is back now that the economy has rebounded and clients are coming to Microsoft asking for “inspiration, guidance, and interaction,” Kim said.

“We are absolutely delighted about having so many of our advertising clients come on campus this week,” Kim said. “The big motivation for us is we want our customers to understand that our vision here at Microsoft is to inspire and enable their imaginations and bring digital experiences to life. Most customers don’t walk into Microsoft with that as their perception, but it’s certainly what we expect them to carry out this week.”