Bats Worth Billions to Agriculture: Pest-control Services at Risk

Pest-control services provided by insect-eating bats in the United States likely save the U.S. agricultural industry at least $3 billion a year, and yet insectivorous bats are among the most overlooked economically important, non-domesticated animals in North America, according to an analysis published in this week’s Science magazine Policy Forum.

“People often ask why we should care about bats,” said Paul Cryan, a U.S. Geological Survey research scientist and one of the study’s authors. “This analysis suggests that bats are saving us big bucks by gobbling up insects that eat or damage our crops. It is obviously beneficial that insectivorous bats are patrolling the skies at night above our fields and forests  —  these bats deserve help.”

The value of the pest-control services to agriculture provided by bats in the U.S. alone range from a low of $3.7 billion to a high of $53 billion a year, estimated the study’s authors, scientists from the University of Pretoria (South Africa), USGS, University of Tennessee and Boston University.  They also warned that noticeable economic losses to North American agriculture could occur in the next 4 to 5 years as a result of emerging threats to bat populations. 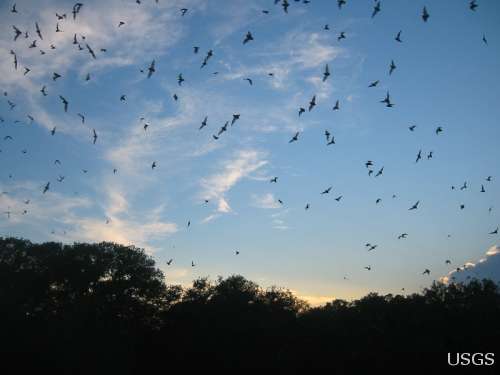 “Bats eat tremendous quantities of flying pest insects, so the loss of bats is likely to have long-term effects on agricultural and ecological systems,” said Justin Boyles, a researcher with the University of Pretoria and the lead author of the study. “Consequently, not only is the conservation of bats important for the well-being of ecosystems, but it is also in the best interest of national and international economies.”

A single little brown bat, which has a body no bigger than an adult’s thumb, can eat 4 to 8 grams (the weight of about a grape or two) of insects each night, the authors wrote. Although this may not sound like much, it adds up  —  the loss of the one million bats in the Northeast has probably resulted in between 660 and 1320 metric tons of insects no longer being eaten each year by bats in the region. 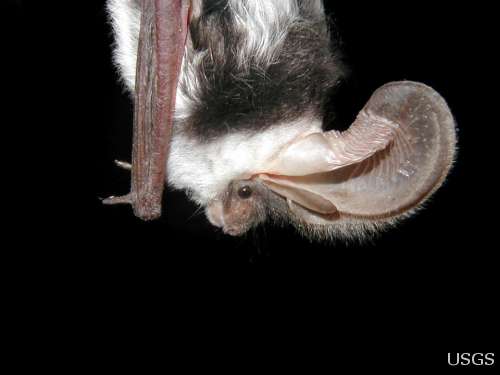 Side View of Insect-Eating Spotted Bat (Euderma maculatum) in New Mexico. This spotted bat, native to western North America, is a hibernating insect-eating bat that may be at risk as the disease white-nose syndrome moves westward. Image credit: Paul Cryan, U.S. Geological Survey

“Additionally, because the agricultural value of bats in the Northeast is small compared with other parts of the country, such losses could be even more substantial in the extensive agricultural regions in the Midwest and the Great Plains where wind-energy development is booming and the fungus responsible for white-nose syndrome was recently detected,” said Tom Kunz, a professor of ecology at Boston University, another co-author.

Although these estimates include the costs of pesticide applications that are not needed because of the pest-control services bats provide, Boyles and his colleagues said they did not account for the detrimental effects of pesticides on ecosystems nor the economic benefits of bats suppressing pest insects in forests, both of which may be considerable. 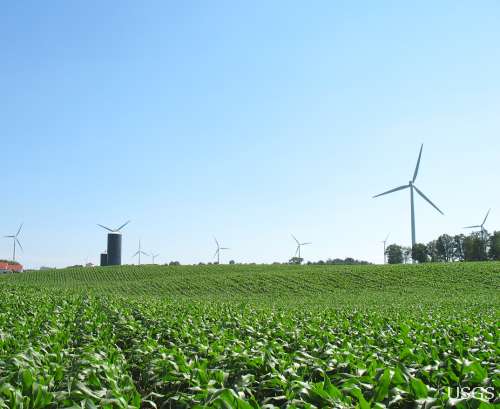 Wind Turbines on a Farm. Scientists have found that wind turbines are causing fatalities of certain species of migratory insect-eating bats, although a March 2011 study in Science suggests that solutions to reduce the impacts of wind turbines on bats may be possible. Image credit: Paul Cryan, U.S. Geological Survey

Bat populations are at risk in some areas of the country as a result of the emerging disease of white-nose syndrome.  The loss of bats to white-nose syndrome has largely occurred during the past 4 years, after the disease first appeared in upstate New York. Since then, the fungus thought to cause white-nose syndrome has spread southward and westward and has now been found in 16 states and 3 Canadian provinces. Bat declines in the Northeast, the most severely affected region in the U.S. thus far, have exceeded 70 percent. Populations of at least one species, the little brown bat, have declined so precipitously that scientists expect the species to disappear from the region within the next 20 years.

Scientists are also concerned with the potential for losses of certain species of migratory bats at wind-energy facilities. By one estimate, published by Kunz and colleagues in 2007, about 33,000 to 111,000 bats will die each year by 2020 just in the mountainous region of the Mid-Atlantic Highlands from direct collisions with wind turbines as well as lung damage caused by pressure changes bats experience when flying near moving turbine blades. The issue raised by the authors is that the impacts on bat populations from white nose syndrome and wind turbines are just beginning to interact and might result in economic consequences. 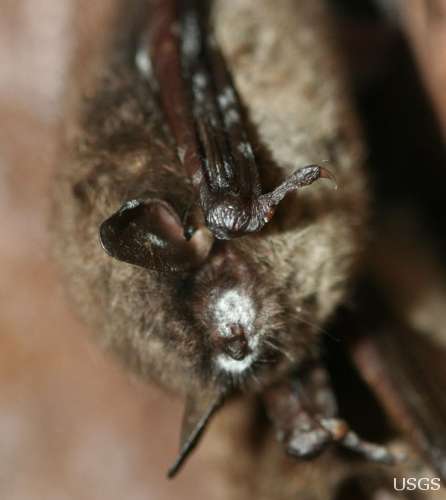 “We hope that our analysis gets people thinking more about the value of bats and why their conservation is important,” said Gary McCracken, a University of Tennessee professor and co-author of the analysis. “The bottom line is that the natural pest-control services provided by bats save farmers a lot of money.”

The authors conclude that solutions to reduce threats to bat populations may be possible in the coming years, but that such work is most likely to be driven by public support that will require a wider awareness of the benefits of insectivorous bats.

The article, “Economic importance of bats in agriculture,” appears in the April 1 edition of Science. Authors are J.G. Boyles, P. Cryan, G. McCracken and T. Kunz.