UCLA stem cell researchers have shown that insulin and nutrition prevent blood stem cells from differentiating into mature blood cells in Drosophila, the common fruit fly, a finding that has implications for studying inflammatory response and blood development in response to dietary changes in humans.

Keeping blood stem cells, or progenitor cells, from differentiating into blood cells is important as blood stem cells are needed to create the blood supply for the adult fruit fly. 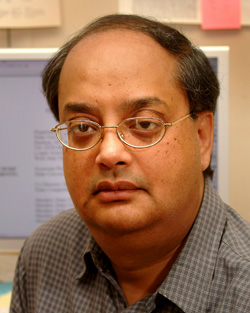 The study found that the blood stem cells are receiving systemic signals from insulin and nutritional factors, in this case essential amino acids, that helped them to maintain their “stemness,” said study senior author Utpal Banerjee, the Irving and Jean Stone Professor and chairman of molecular, cell and developmental biology in the UCLA Division of Life Sciences and a researcher with the Eli and Edythe Broad Center of Regenerative Medicine at UCLA.

“We expect that this study will promote further investigation of possible direct signal sensing mechanisms by mammalian blood stem cells,” Banerjee said. “Such studies will probably yield insights into chronic inflammation and the myeloid cell accumulation seen in patients with type II diabetes and other metabolic disorders.”

In the flies, the insulin signaling came from the brain, which is an organ similar to the human pancreas, which produces insulin. That insulin was taken up by the blood stem cells, as were amino acids found in the fly blood, said Ji Won Shim, a postdoctoral fellow in Banerjee’s lab and first author of the study.

Shim studied the flies while in the larval stage of development. To see what would happen to the blood stem cells, Shim placed the larvae into a jar with no food — they usually eat yeast or cornmeal — and left them for 24 hours. Afterward, she checked for the presence of blood stem cells using specific chemical markers that made them visible under a confocal microscope.

“Once the flies were starved and not receiving the insulin and nutritional signaling, all the blood stem cells were gone,” Shim said. “All that were left were differentiated mature blood cells. This type of mechanism has not been identified in mammals or humans, and it will be intriguing to see if there are similar mechanisms at work there.”

In the fruit fly, the only mature blood cells present are myeloid cells, Shim said. Diabetic patients have many activated myeloid cells that could be causing disease symptoms. It may be that abnormal activation of myeloid cells and abnormal metabolism play a major role in diabetes.

“Metabolic regulation and immune response are highly integrated in order to function properly dependent on each other. Type II diabetes and obesity, both metabolic diseases, are closely associated with chronic inflammation, which is induced by abnormal activation of blood cells,” Shim said. “However, no systemic study on a connection between blood stem cells and metabolic alterations had been done. Our study highlights the potential linkage between myeloid-lineage blood stem cells and metabolic disruptions.”

Going forward, Banerjee and his team are seeking other system signaling molecules that may be controlling blood stem cells in the fruit fly.

“It is known that metabolic dysfunction in mammals causes abnormal inflammatory responses in the blood system. However, how metabolic stresses impinge on blood cell development is still unclear,” the study states. “Here, we found that starvation of Drosophila larvae leads to blood cell phenotypes. The most striking effect is acceleration of blood cell differentiation both in time and number of cells affected.”

The two-year study was supported by the National Institutes of Health and a training grant from the Broad Stem Cell Research Center at UCLA.