Statue, Chapels and Animal Mummies Found in Egypt by U of T Team

A wooden statue of a king, a private offering chapel, a monumental building and remains of over 80 animal mummies found by a University of Toronto-led team in Abydos, Egypt reveal intriguing information about ritual activity associated with the great gods.

Professor Mary-Ann Pouls Wegner of the Department of Near and Middle Eastern Civilizations presented her team’s findings at a recent meeting of the Society for the Study of Egyptian Antiquities.

The wooden statue is one of very few existing royal wooden statues, and may represent the female king Hatshepsut. She was often portrayed as male in stone because the Egyptian pharaoh was understood to be son of the god Amon-Re (she was also known to dress as a man for the role). But this statue has a smaller waist and delicate jawline, acknowledging these aspects of her feminine physique.

It is believed to be from a ceremonial procession in which wooden statues of the royal ancestors (spirits of the kings) and gods were carried in boat-shaped shrines by priests from the temple of Osiris to his tomb. The procession was part of a festival celebrating the afterlife of the god Osiris. 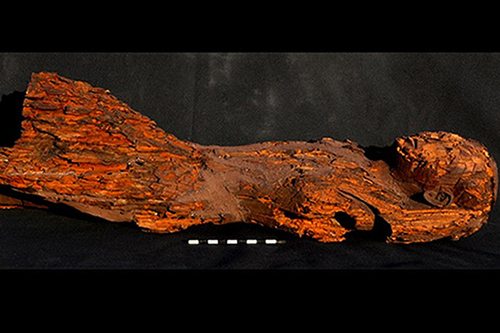 U of T archeologists believe this rare wooden statue may represent a female Egyptian "king." (Photo by Mary-Ann Pouls Wegner)

Egyptians from all levels of society built chapels and monuments along the processional route as a way of ensuring their eternal participation in the festival and their identification with Osiris. Building too close to the route, however, was prohibited by the state and infringement carried the threat of the death penalty. The offering chapel they uncovered is believed to be that of an elite person, dates from about 1990 to 1650 BC and shows where the boundary to the route was.

“The offering chapel proves that people — probably elites — were able to build monuments right next to the processional route in the Middle Kingdom, and that at least one such chapel was allowed to stand in this increasingly densely built-up area and continued to receive offerings even 800 years after its initial construction,” said Pouls Wegner.

A much larger structure discovered is likely either a temple or royal chapel from the Ramesside Period. Long after its initial construction, the structure was re-used as a repository for animal mummies. In this context, the researchers found a mass of animal bones and linen fragments. Two cats, three sheep or goats, and at least 83 dogs, ranging in age from puppies to adults, were discovered. Several of the animals had recovered from injuries, suggesting that they had been cared for before they were sacrificed, probably for the jackal god Wepwawet, who was an important deity in the Osiris festival as the leader of the procession and protector of the cemetery.

The dig was conducted in Egypt in June and July 2011. It was supported by a research grant from the Wenner-Gren Foundation of Anthropological Research with photo and survey equipment provided by U of T’s Archaeology Centre. Wegner’s team included Ayman Damarany, Barakat ‘Eid Ahmed and Mahmoud Mohamed of the Supreme Council of Antiquities of Egypt, archaeological illustrator Tamara Bower and U of T graduate students Meredith Brand, Amber Hutchinson, Christina Geisen and Janet Khuu.

1 comment on “Statue, Chapels and Animal Mummies Found in Egypt by U of T Team”