*Microsoft CEO Steve Ballmer, economist Jeffrey Sachs, and Foursquare founder and CEO Dennis Crowley opened the Imagine Cup 2011 World Finals on Friday night. The competition heated up over the weekend with the first set of finalists being announced Sunday night.*

NEW YORK CITY – Microsoft CEO Steve Ballmer inspired them to be great, economist Jeffrey Sachs gave them the homework assignment of saving the world, and Foursquare founder and CEO Dennis Crowley showed them how tangibly close they are to success.

Students representing 70 countries and regions descended on New York City over the weekend to participate in the Imagine Cup 2011 Worldwide Finals, which challenges students from across the globe to use technology to solve world problems like feeding the hungry, fighting disease, and creating new forms of energy. Finalists in the competition’s nine categories were announced on Sunday and the overall winners will be announced on Wednesday.

Ballmer congratulated this year’s 400 finalists at the Imagine Cup’s opening ceremony on Friday, honoring them for advancing to New York from the pool of 350,000 students who entered this year’s competition.

“You have to find something that you can put yourself into – heart, body and soul,” Ballmer said. “It doesn’t matter who you are in this business, there’s no substitute for really being tenacious and keeping after (the) ideas that you are really passionate about.”

The students got to hear from many education leaders over the weekend, including Arthur Vanderveen, CEO of the Office of Innovation in the New York City Department of Education, who reminded the assembled competitors that they are now the ones who are being looked up to. “You all are a model and an inspiration to our students,” Vanderveen said. “I wish you were here longer, and we could have more time for our students to come see the solutions that you’re designing and developing.” 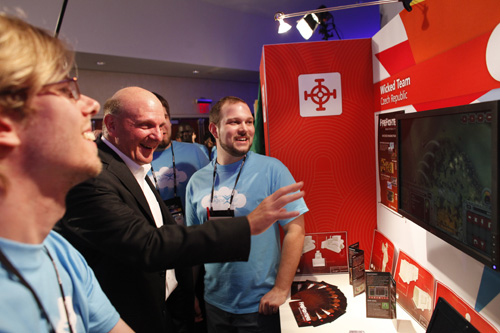 Sachs, director of Columbia University’s Earth Institute, told the students that the technology they are helping to create will be needed to solve the “absolutely harrowing” problems that the next generation of leaders will inherit.

“We will reach 7 billion people on the planet in three months,” Sachs said. “We are more crowded in the world and pressing against limits of ecosystems, limits of food supply, resource limits, barriers and threats of contagion, of diseases that spread more rapidly than ever before, of rising numbers of extreme poor, at the same moment that we have all this power, the technology, the potential to address these problems.”

And after making those sobering remarks, he gave out an equally sobering homework assignment.

“It’s not for the semester – it’s for your lifetime,” Sachs said. “(It’s) a homework assignment – really – that is nothing less than saving the planet. In every area, disease control, educational access, information systems, the fight against hunger, the fight for a sustainable climate, for a new and secure energy system, information technology will be at the very center of the solutions. 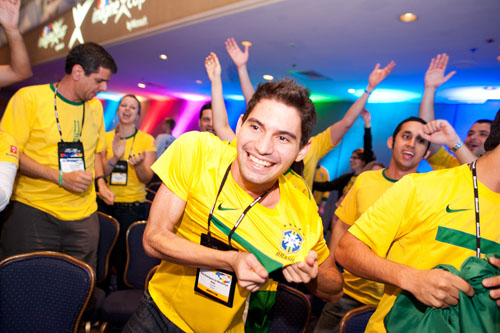 Julio Rodrigues de Mendonca Neto celebrates with the rest of the Brazil teams as they learn on July 9, 2011, that both Team LevelUp and Team Embedded Brain will be advancing to the second round of competition at the Imagine Cup 2011 Worldwide Finals in New York City. Image Credit: Microsoft

“It’s an enormous, enormous honor for me to therefore greet you, to thank you for your work, to give you that homework assignment,” he added. “You don’t just leave here with the Imagine Cup and think your work is done – you have a lot of work ahead.”

And if Sachs challenged Imagine Cup competitors to save the world, Crowley, the founder of Foursquare, showed them that they might be closer to reaching their goals than they think.

“We’ve got about 10 million people that are using the (Foursquare) service,” said Crowley. “It grows by about a million users a month. This is my first time being CEO of a company, and it’s very exciting.”

And while it may look like a glamorous run to success, he said, it really hasn’t been that.

It wasn’t long ago that “I was sitting in the exact same seats that you are sitting in,” Crowley said, explaining that he faced many bumps along the way – including being laid off and being forced to work as a snowboarding instructor – before he finally got it right. “Foursquare’s success is built off of 10 years’ worth of failure.”

Success depends on a lot of factors, he said, including timing.

The Imagine Cup’s opening ceremony “was inspiring,” said Wai Lun Chan, a member of team Cyber Knightz, from Malaysia, which is competing with software that helps cancer patients monitor their health, treatment, and diet. “I’m really pumped up.”

Lun Chan said his team has a good project and that they would like to form a company to pursue their idea even if – just like with Crowley and Foursquare – it doesn’t win out of the gate.

“It’s hard work,” he said, explaining that this is the second time his team has entered into the Imagine Cup. Last year they didn’t make it to the world finals. “What is the most important is determination, and we’re determined. Our project is better this year.”