Perfecting the Meat of the Potato

EAST LANSING, Mich. — By honing in on the mysterious potato genome and its tuber – its edible portion – researchers are unveiling the secrets of the world’s most-important nongrain food crop.

Robin Buell, Michigan State University plant biologist, is part of an international research team that is mapping the genome of the potato. In the current issue of Nature, the team revealed that it accomplished its goal, thus quickly closing the gap on improving the food source’s elusive genome.

The potato is a member of the Solanaceae, an economically important family that includes tomatoes, peppers, eggplants, petunia and tobacco. Despite the importance of tubers, the evolutionary and developmental mechanisms of how they grow and reproduce remained elusive – until now, Buell said. 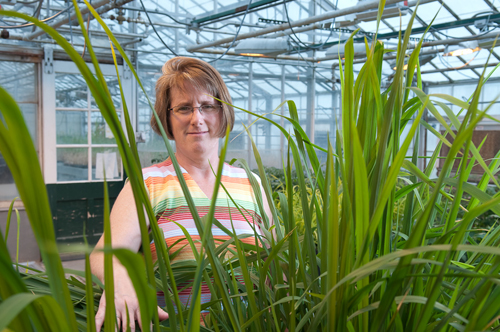 “This is the first plant with a tuber to be sequenced,” she said. “It will still take researchers awhile to use the genome information to improve its agronomic traits, such as improved quality, yield, drought tolerance and disease resistance. But our most-recent research will accelerate efforts on improving potato varieties and help close the gap in bringing a better potato to the farmer.”

Even though potatoes have flourished on every continent except Antarctica, they are susceptible to pests, pathogens and inbreeding depression (passing on undesirable traits that lead to weaker offspring). Ireland’s 19th century potato famine is one illustration of how the collapse of such an important crop can affect a large population.

In 2009, the research team was able to identify the potato’s genetic blueprint. During the last two years, the team has worked to determine which genes are expressed in specific tissues, such as the tuber versus the flowers, to better understand the growth and development of the plant’s tuber. The team focused on two types of potatoes, which provided data on a wide spectrum of the potato’s genomic diversity.

“Since our initial release of the sequence in 2009, we have improved the quality, identified and analyzed the genes and analyzed the genetic basis for biology of the potato and its tuber,” Buell said. “Our analysis revealed that the potato genome contains 39,000 protein coding genes, of which, 90 percent of the chromosomal positions are now known.”

Additionally, researchers were successful in identifying possible mechanisms by which inbreeding depression occurs. All told, the results could help potato breeders reduce the amount of time it takes to develop new varieties, which typically takes around 15 years.

Buell is looking to continue her research to address these evolutionary inadequacies as well as expand to include more varieties of potatoes as well as other members of the Solanaceae family.

The Potato Genome Sequencing Consortium, an international team of 39 scientists from 14 countries, began work on the potato genome project in 2006. The complete sequence is estimated to be 840 million, about one-quarter the size of the human genome. The draft sequence, which covers 95 percent of potato genes, is available at www.potatogenome.net.

Co-author of the paper was Dean Della Penna, MSU professor of biochemistry and molecular biology.

Buell’s research is supported by the U.S. Department of Agriculture, the National Science Foundation and MSU AgBioResearch.