Scientists on a Mission: Detailed Study of U.S. Southeast Tornadoes

*Focus on deadly April 27, 2011, outbreak in Alabama and surrounding states*

It was one of the deadliest tornado outbreaks in U.S. history.

Now scientists are organizing a research program to better understand the tornadoes that blew through Alabama and other southeastern states on April 27, 2011.

Scientists at the University of Alabama in Huntsville (UAH) are analyzing radar data from that day, then merging the information with detailed storm surveys and other data. They hope to learn more about how the storms formed, what made the storms so powerful and what might be done to make tornado warnings more effective.

The National Science Foundation (NSF) funds the project through a Rapid Response Research (RAPID) grant, which enables support for fast-response research tied to events such as tornadoes.

“Heavily forested rolling terrain and limited public awareness may present unique challenges to tornado detection in this area and to widespread dissemination of and effective public response to severe weather warnings,” said Brad Smull, program director in NSF’s Division of Atmospheric and Geospace Sciences, which funded the RAPID award. 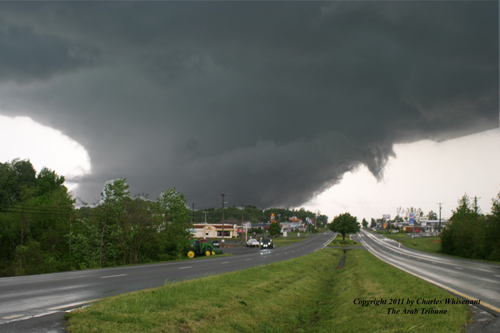 Image of a strong tornado near Arab, Ala., part of the outbreak on April 27, 2011. Image credit: Charles Whisenant

In addition to studying the physics of the storms, the team will look at the psychology and sociology of storm warnings.

A graduate student from the University of Oklahoma and UAH student volunteers and scientists are interviewing survivors to learn more about how and when people reacted to that day’s repeated tornado warnings.

“One thing we’re after is whether people are desensitized because the false alarm rate is so high, especially in areas where there are only countywide alerts,” said Kevin Knupp, who leads UAH’s severe weather research team.

Data compiled by UAH scientist Tim Coleman shows about a ten-fold increase in warnings among Memphis, Atlanta and Tallahassee since the National Weather Service (NWS) installed the NEXRAD Doppler radar system, and that about 80 percent of all warnings are “false.”

The increase in warnings is due in large part to the NEXRAD radar’s ability to spot “rotation” inside a storm system. 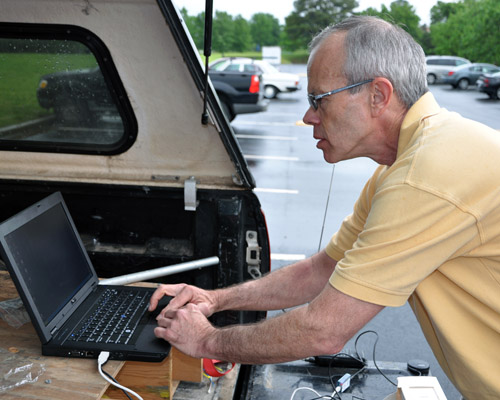 Installed between 1993 and 1997, the five NEXRAD radar units in Alabama are also better at detecting small tornadoes than the previous system.

In the years since NEXRAD was installed, the number of small tornadoes documented by the National Weather Service in Alabama has increased almost threefold, while the number of larger tornadoes has stayed roughly the same.

“Before NEXRAD we didn’t know these rotational elements along squall lines were so prevalent,” Knupp said. “If a small tornado didn’t cause property damage or wasn’t reported, we might never know about it. Now we can see the rotation, pinpoint the location, then go out afterward and look for damage to confirm whether there was or was not a tornado on the ground.”

The UAH survey team is learning more about how the public judges the threat of dangerous weather.

“Did people perceive these tornadoes as dangerous?” Knupp asked. “There were tornado watches posted hours before the storms hit, and some of the tornado warnings went out 15 or 20 minutes in advance.

“Did people dawdle because they thought there was no need to rush to take shelter? It apparently takes visual images to make some people react. Of course, if we need pictures of an approaching tornado to make people take shelter, then we’ve got a problem.” 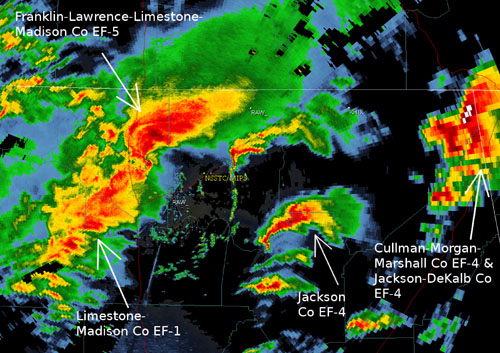 “Since we have three radars, we can reconstruct the wind field in detail for each of the cells and squall lines that moved through,” Knupp said. “We had a full spectrum of storms, and it seemed that almost every storm formed a tornado.”

The radar data will be compared to detailed aerial reconnaissance of the tornado tracks.

“The damage path is really the fingerprint of the tornado,” Knupp said. “That is why it was so urgent to do this reconnaissance quickly, before the cleanup or re-growth could erase the clear tracks.”

“We will look to see what was in those areas before the storms hit. Was it metal buildings, a residential area, forest or fields?” he asked. “We can use that information to relate what we saw in the radar to what was being churned up by the tornado.”

The detailed radar and surface data will also help scientists determine whether other factors, such as surface roughness, topography or gravity waves, played a role in forming or strengthening tornadoes.

Knupp assisted with the NWS surveys of the April storm tracks.

“I talked to one woman who took shelter in her bathtub,” he recalled. “Her house went one way and her tub went another. There was a post that pierced the tub, but she walked away from it.

“In Hackleburg [Alabama], I saw a heavy cast iron bathtub that was upside down and completely disconnected from its plumbing. That was not survivable.”

Knupp was surprised at the relatively large number of storm shelters in the area, even those that were just storm pits–“a mound of dirt with a door facing north or south,” he said. “There have been reports that some people were fearful of getting into their storm shelters due to a fear of snakes or spiders.

“Let me tell you, I have a near-phobia of spiders, but I would get into a storm pit if there was a tornado warning.”