COLUMBIA, Mo. – Children who witness domestic violence are more likely to be in abusive intimate relationships and experience psychological problems such as post traumatic stress disorder (PTSD) in adulthood, according to the Centers for Disease Control and Prevention. A University of Missouri researcher has found that certain protective factors foster resilience and increase the likelihood that the cycle of violence will end for women who, as children, were exposed to their mothers’ battering.

Kim Anderson, associate professor in the MU School of Social Work, found that women are less likely to suffer from PTSD if they are more resilient, or better able to overcome adversity. In regard to childhood protective factors that increase adult resilience, Anderson found that mothers who were employed full-time had a positive influence on their children’s recovery from witnessing domestic violence. 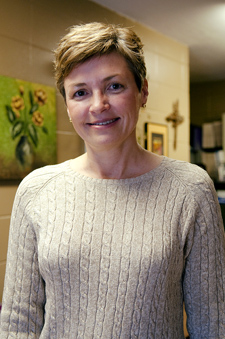 “Mothers who work full-time, even in adverse situations, create economic stability and model a strong work ethic, independence and competence,” Anderson said. “This shows the importance of the bond between mothers and children and the importance of positive adult role models in the lives of children who have experienced abuse.”

The study also identified risk factors for PTSD in women who as children witnessed the abuse of their mothers, including the mental health status of their mothers and police involvement in violent incidents. In particular, children of mothers who had mental health problems were more likely to develop PTSD later in life, as were children who witnessed the arrest of family members during violent incidents.

Anderson says recent financial cuts in domestic violence services and advocacy programs have made it difficult to provide abused women with the resources they need to recover from violent incidents. She recommends advanced job training and opportunities for higher education to help abused women attain sustainable employment.

“Most of the time, the immediate goal is to find women work rather than help them acquire skills that fit their interests,” Anderson said. “Those jobs are often low-paying and don’t provide the economic sustainability that going back to school and getting a higher education would.”

The study, “Assessing PTSD and Resilience for Females Who During Childhood were Exposed to Domestic Violence,” was published in Child & Family Social Work. The School of Social Work is part of the MU College of Human Environmental Sciences.