A team of scientists has discovered the youngest dinosaur preserved in the fossil record before the catastrophic meteor impact 65 million years ago. The finding indicates that dinosaurs did not go extinct prior to the impact and provides further evidence as to whether the impact was in fact the cause of their extinction.

Researchers from Yale University discovered the fossilized horn of a ceratopsian — likely a Triceratops, which are common to the area — in the Hell Creek formation in Montana last year. They found the fossil buried just five inches below the K-T boundary, the geological layer that marks the transition from the Cretaceous period to the Tertiary period at the time of the mass extinction that took place 65 million years ago.

Since the impact hypothesis for the demise of the dinosaurs was first proposed more than 30 years ago, many scientists have come to believe the meteor caused the mass extinction and wiped out the dinosaurs, but a sticking point has been an apparent lack of fossils buried within the 10 feet of rock below the K-T boundary. The seeming anomaly has come to be known as the “three-meter gap.” Until now, this gap has caused some paleontologists to question whether the non-avian dinosaurs of the era — which included Tyrannosaurus rex, Triceratops, Torosaurus and the duckbilled dinosaurs — gradually went extinct sometime before the meteor struck. (Avian dinosaurs survived the impact, and eventually gave rise to modern-day birds.) 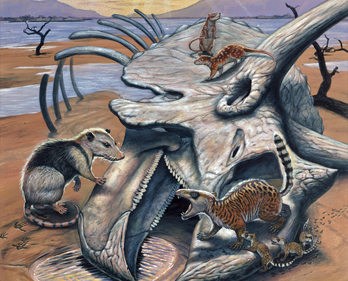 Three small primitive mammals walk over a Triceratops skeleton, one of the last dinosaurs to exist before the mass extinction that gave way to the age of mammals. (Image credit: Mark Hallett)

“This discovery suggests the three-meter gap doesn’t exist,” said Yale graduate student Tyler Lyson, director of the Marmarth Research Foundation and lead author of the study, published online July 12 in the journal Biology Letters. “The fact that this specimen was so close to the boundary indicates that at least some dinosaurs were doing fine right up until the impact.”

While the team can’t determine the exact age of the dinosaur, Lyson said it likely lived tens of thousands to just a few thousand years before the impact. “This discovery provides some evidence that dinosaurs didn’t slowly die out before the meteor struck,” he said.

Eric Sargis, curator of vertebrate paleontology at the Yale Peabody Museum of Natural History, and graduate student Stephen Chester discovered the ceratopsian last year while searching for fossilized mammals that evolved after the meteor impact. At first, Lyson said, the team thought it was buried within about three feet of the K-T boundary, but were surprised to learn just how close to the boundary — and hence, how close in time to the impact — it was. They sent soil samples to a laboratory to determine the exact location of the boundary, which is marked by the relative abundance of certain types of fossilized pollen and other geological indicators but is difficult to determine visually while in the field. 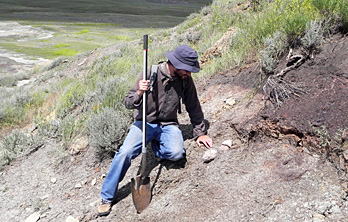 Because the dinosaur was buried in a mudstone floodplain, the team knew it hadn’t been re-deposited from older sediments, which can sometimes happen when fossils are found in riverbeds that may have eroded and re-distributed material over time.

The team is now examining other fossil specimens that appear to be buried close to the K-T boundary and expect to find more, Lyson said. He suspects that other fossils discovered in the past may have been closer to the boundary than originally thought and that the so-called three-meter gap never existed.

“We should be able to verify that using the more sophisticated soil analysis technique rather than estimating the boundary’s location based solely on a visual examination of the rock formations while in the field, which is what has typically been done in the past,” Lyson said.

This research was supported by the Yale Peabody Museum of Natural History and the Marmarth Research Foundation.