Company’s latest efforts are part of an ongoing initiative to close the “opportunity divide” facing the next generation.

REDMOND, Wash. — August 23, 2012 — In the 2008 U.S. presidential campaign, young people emerged as a force to be reckoned with. They canvassed neighborhoods, worked phone banks and, on Election Day itself, streamed to the polls in numbers eclipsed only by the 1972 election. But in 2012 it appears young people may be less engaged in the political process, even though the issues at the forefront — jobs, education, student loan debt — are ones that affect them directly.

Charles Hauser has heard all this firsthand. A student at Johnson C. Smith University in Charlotte, N.C., he admits he doesn’t think his peers are as involved politically as they could be. “I have heard some young people say they don’t feel their votes count,” he says. “I also feel it is harder to be actively involved when there is so much turmoil economically.” 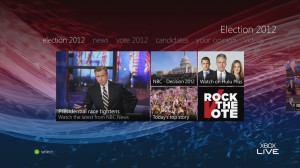 Election 2012 on Xbox LIVE. Election 2012 on Xbox LIVE, an immersive and interactive experience highlighted by a content-rich elections “hub,” will feature live broadcasts of the presidential debates and the "Conversations with the Next Generation" forums as well as voter registration info and in-depth data on the candidates. Image credit: Microsoft

But Hauser and other students like him want to change that, and they’ve found a strong ally in Microsoft, which is bringing its technological expertise to bear in a wide-ranging effort to promote dialog and participation in the 2012 U.S. election process, including a special effort to encourage young people to make their voices heard.

Microsoft’s efforts will take several forms, including “Conversations with the Next Generation,” live town hall events featuring youth panels at the Republican National Convention in Tampa, Fla., and the Democratic National Convention in Charlotte. These events will bring together top leaders from politics, media, business and social policy for a discussion of issues important to students and young workers.

The two events have been developed in partnership with The Atlantic and National Journal, and will be moderated by key news figures such as NBC News correspondents Chuck Todd and Chelsea Clinton. Both events will be broadcast on Xbox LIVE. The forum will be held on Wednesday, Aug. 29, and the Charlotte event will be held on Wednesday, Sept. 5. Both will run from to 4:30 p.m. ET.

Hauser, who will be a panelist at the “Conversations with the Next Generation” event in Charlotte, says such events “are very important in getting young people involved. Events like this make young people feel as though they are being heard and being paid attention to. Young people feel as though no one cares how they truly feel about serious issues. Also, with technology being so integrated in society and social activities, young people take interest in events that involve high-tech leaders like Microsoft.” 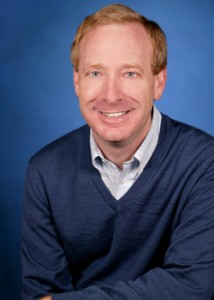 Lisa Stickan, chairwoman of the Young Republican National Federation, will be a panelist at the “Conversations with the Next Generation” forum at the Republican Convention in Tampa. “We’re going to be talking about the issues that impact young voters,” Stickan says.

“It’s an important conversation to have,” she adds. “There’s a lot of talk about the youth vote. Typically there’s a perception that younger people don’t care and don’t want to vote. We’ve seen that disproved in the past. It’s important that we address those issues and give our voices a place at the table.”

Stickan says technology is critical in reaching young voters in particular. “The way people communicate changes from generation to generation,” she says. “You have to go where people are in order to get the message to them.”

Elizabeth Baker Keffer, vice president of The Atlantic and president of Atlantic LIVE, says The Atlantic was happy to once again partner with Microsoft in presenting the town hall-style forums. The two companies held similar events focusing on jobs and education during the past year.

“We’ve really been in sync in Microsoft in terms of thinking about the major issues facing the country, and the importance of gathering thoughtful dialog on these issues,” Keffer says. “As the conventions approached we thought this would be a perfect opportunity to recreate the town hall forums, focusing on young people and the issues important to them — jobs and education. If you’re a student or a recent graduate, we want to know how you are feeling about things like job prospects, and which political parties you are thinking about. That’s the concept here.”

Keffer says such efforts are important in an election year when “there’s strong interest but, since the economy hasn’t recovered very well, there’s also a little bit of skepticism or even cynicism. That’s why we thought it was important to engage youth in a dialog, since they’re such a crucial part of the conversation.”

An Ongoing Effort to Engage the Next Generation

Microsoft’s election efforts are part of a broader, ongoing effort to make technology accessible and useful to young people. Earlier this month Tampa hosted “Back to School With Microsoft,” in which more than 500 teachers were trained as part of an effort to modernize in-classroom teaching with Microsoft technologies, boost students’ technology skills, and emphasize the value of science, technology, engineering and math (STEM) learning in preparation for 21st century careers.

Brad Smith, Microsoft executive vice president and general counsel, says such efforts are important in focusing attention on what Microsoft and other partners call the “opportunity divide” that young people now face in the and around the world. 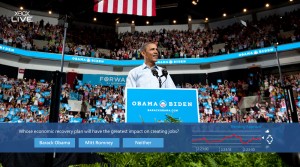 Polling and Real-Time Interactivity on Election 2012 on Xbox LIVE. A series of polls seeking Xbox users' opinions of various aspects of the elections will be available on Election 2012 on Xbox LIVE. Additionally, users will be able to rate the performances of the candidates during the presidential debates in real-time, and instantly see how other Xbox users are voting. Image credit: Microsoft

“As we look at the issues it’s clear that there’s a gap between those students who have access to training and education and those who do not,” he says. “And there’s a very large and expanding gap between the jobs the country is creating and the skills people need to fill them.”

Smith notes that by the end of 2013 the United States will add another million high-paying tech-related jobs, but companies will have trouble filling those positions because fewer than 15 percent of college students are getting degrees that prepare them for tech-industry careers. “We need to build a broader awareness of this problem, and these conventions and other events provide a very important opportunity to do that,” he says.

After all, Smith asks, “What company in the world connects with young people the most? It’s clearly Microsoft, whether it’s through our software, Xbox, services like Skype, or the things we’ve been doing over the last decade through our community affairs efforts and philanthropic work. We’ve had programs in place for awhile and we’re now reinventing and expanding this work to focus on the opportunity divide that youth are facing.”

Smith notes that the Microsoft “Partners in Learning” program has reached more than 200 million students and 10 million teachers in the past decade. “On a global basis, and locally with programs like the one in Tampa, we’re building very strong partnerships in working with students.”

Smith says Microsoft is “focused on making a positive impact in solving this problem by training more young people and equipping them with the skills they need to get jobs.”

He stresses that the upcoming election forums are not isolated events but rather “build on work we’ve been doing for a long time.” And he adds, Microsoft employees will be encouraged to get involved as well, in a variety of ways. “We’re building a foundation for further work we’re going to do, and there will be opportunities for employees to contribute to this.”

But he adds that Microsoft can’t do it alone. “We’re focused on contributing to solutions that go beyond our own activities. This will require work from lots of different industries, individuals and philanthropies. We will need a strong public-private partnership to make the lasting changes that the country needs.”

Why is this so important, particularly to young people? As Hauser puts it, “Our futures are at stake in these elections.”

Microsoft will also be offering Election 2012 on Xbox LIVE, an immersive and interactive experience highlighted by a content-rich elections “hub” that will feature:

And in what promises to be one of the most exciting features of Election 2012 on Xbox LIVE, users will be able to rate the performances of the candidates during the presidential debates in real-time, and instantly see how other Xbox users are voting.

“As the candidates debate you’ll be able to give a thumbs-up or thumbs-down,” says Jose Pinero, senior director of public relations for Xbox Entertainment. “We see this as a great opportunity to deliver an interactive TV experience. If we marry the desire of consumers to watch important news events and bring the interactivity we have with Xbox, this will be the first truly interactive live television experience.”

Pinero notes that until now, such real-time polling had only been done on a very limited scale, with small focus groups.

“We’re taking this onto a massive scale,” he says. “We can have hundreds of thousands of people, maybe millions, providing feedback from the comfort of their own homes. That’s never been done before. I truly believe this is the future of television.”

Pinero adds: “Xbox LIVE has about 40 million members around the world. We have a great audience, an engaged community. We want to make sure that we help that community to enjoy not only entertainment but something that’s so important as the elections.”

Pinero says a recent survey of Xbox users who are also registered voters found that about 40 percent were still undecided about who to vote for in the presidential elections.

“We’re calling this audience the ‘Xbox Swing Voter’,” he says. “They will decide in the next couple of months how they’ll vote, and it will be interesting to see how they move as events move forward. I think that both political parties will be interested in seeing how that group tracks.”