Yards with plants that mimic native vegetation offer birds “mini-refuges” and help to offset losses of biodiversity in cities, according to results of a study published on August 22, 2012 in the journal PLOS ONE.

Researchers conducted the study through the National Science Foundation’s (NSF) Central Arizona-Phoenix Long-Term Ecological Research (LTER) site, one of 26 such sites around the globe in ecosystems from coral reefs to deserts, from forests to grasslands.

“To a desert bird, what’s green is not necessarily good,” says Doug Levey, program director in NSF’s Division of Environmental Biology. “Arizona birds don’t view lush urban landscapes as desert oases. The foraging behavior of birds in greener yards suggests that there’s less food for them there than in yards with more natural vegetation.” 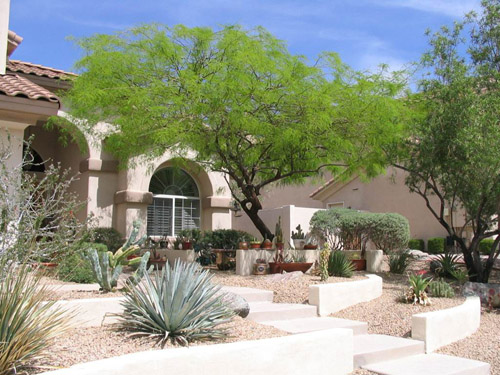 A xeric, or desert, yard in Phoenix: This yard with native vegetation is a mini-refuge for birds. Image credit: Susannah Lerman

The research, led by scientists Susannah Lerman and Paige Warren of the University of Massachusetts-Amherst, and Hilary Gan and Eyal Shochat of Arizona State University, looked at residential landscape types and native bird communities in Phoenix, Ariz.

It’s among the first to use quantitative measures and a systematic approach–including 24-hour video monitoring–in yards to assess and compare foraging behavior of common backyard birds.

The scientists found that desert-like, or xeric, yards had a more even bird community and superior habitat compared with moist, or mesic, grass lawns.

“We already know that bird communities differ, and that there are more desert birds found in a desert-type yard,” says Lerman.

“With this study, we’re starting to look at how different yards function–whether birds behave differently by yard type. We’re doing that using behavioral indicators, especially foraging, as a way of assessing birds’ perceptions of habitat quality between differing yard designs.” 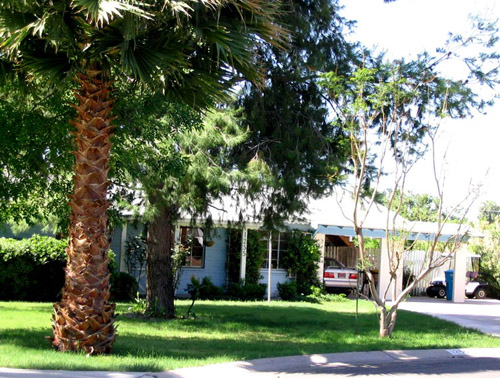 This mesic yard in Phoenix, with its non-native grass lawn, is less attractive to native birds. Image credit: Susannah Lerman

Lerman and colleagues conducted the experiment in 20 residential yards at least 1.8 miles apart, making it unlikely that the same birds would visit more than one study yard.

Half the yards were desert-like, while the others had green lawns.

From February through April 2010, homeowners removed bird feeders before and during a 24-hour experimental data collection period.

The researchers set up feeding stations–seed trays–in each yard to simulate resource patches similar to ones where birds feed in the wild. Plastic trays contained 0.70 ounces of millet seed mixed into six pounds of sand. The trays were placed on low stools and left out for 24 hours.

Later, Lerman removed the trays, sifted out and weighed uneaten seed to the nearest 0.01 gram. The amount of seed remaining quantified the giving-up densities (GUD), or the foraging decision and quitting point for the last bird visiting a seed tray.

Trays were videotaped for the entire 24-hour experiment.

The experiment assumed that an animal behaving optimally would stop foraging from a seed tray when its energy gains equal the “costs” of foraging, Lerman says. 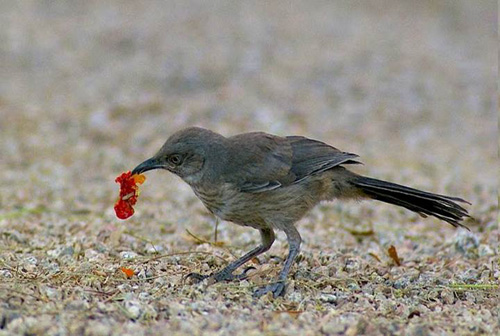 As time spent foraging at a seed tray increases, so do the costs associated with foraging. When a bird first arrives at the tray, seeds are easy to find, but that gets harder as the tray becomes depleted.

Each bird makes a decision about whether to spend time searching in the tray or to move on to a new patch in the yard.

The “giving up” point will be different for different species and in different environmental conditions. Birds visiting seed trays in yards with more natural food available will quit a tray sooner than birds in resource-poor yards.

Using the videotapes, they counted every peck by every bird for each tray to calculate the relationship between the number of pecks and grams of seed consumed for each seed tray. This was the GUD-peck ratio for the last species visiting the seed tray.

They then estimated the seed consumption–GUD ratio for all other species visiting the seed tray based on the number of pecks per tray when each species quit. 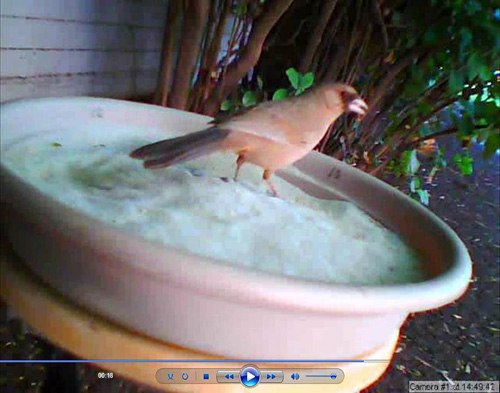 “We know how many pecks each species had and can put that number into the model and calculate the number of grams at that point,” Lerman says. This greatly enhances the GUD method by expanding the ability to assess foraging decisions for all species visiting trays.

In all, 14 species visited the trays, 11 of which visited both yard types. Abert’s towhee, curve-billed thrasher (a species unique to the Sonoran desert), house finch and house sparrow were the most widespread tray visitors. 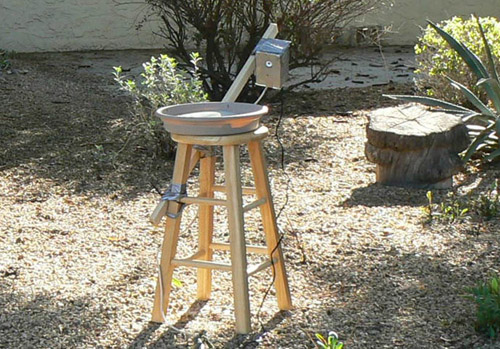 Similarly, foragers in the desert-like yards quit the seed trays earlier due to greater abundance of alternative food resources in those yards, spending more time foraging in the natural yards and less at the seed trays.

Lerman says that by videotaping the trays, counting pecks and measuring giving-up points by species, the research also advanced the GUD method, allowing researchers to disentangle some of the effects of bird community composition and density of competitors, and how these factors affect foraging decisions between two different landscape designs.

The results build upon evidence that native landscaping can help mitigate the effects of urbanization on common songbirds, she says.