Material properties and interactions are largely determined by the binding and unbinding of their constituent molecules, but the standard model used to interpret data on the formation and rupturing of molecular bonds suffers from inconsistencies. A collaboration of researchers led by a scientist at the U.S Department of Energy (DOE)’s Lawrence Berkeley National Laboratory (Berkeley Lab) has developed a first-of-its-kind model for providing a comprehensive description of the way in which molecular bonds form and rupture. This model enables researchers to predict the “binding free energy” of a given molecular system, which is key to predicting how that molecule will interact with other molecules.

“Molecular binding and unbinding events are much simpler than we have been led to believe from the standard model over the past decade,” says Jim DeYoreo, a scientist with the Molecular Foundry, a DOE nanoscience center at Berkeley Lab who was one of the leaders of this research. “With our new model, we now have a clear means for measuring one of the most important parameters governing how materials and molecules bind together.”

DeYoreo is one of the two corresponding authors of a paper in the Proceedings of the National Academy of Sciences (PNAS) that describes this research. The paper is titled “Interpreting the widespread nonlinear force spectra of intermolecular bonds.” The other corresponding author of this paper is Raymond Friddle of DOE’s Sandia National Laboratories. The third author is Aleksandr Noy, of DOE’s Lawrence Livermore National Laboratory. 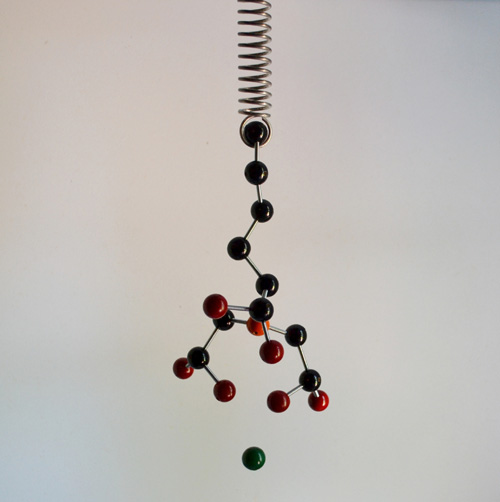 Under dynamic force spectroscopy, the bonds of a molecular system are subjected to controlled stretching until the bonds break. (Image courtesy of Jim DeYoreo, Berkeley Lab)

It takes energy to form or rupture the bonds between or within molecular systems and one of the principle experimental tools used by researchers to characterize inter- and intra-molecular bond energies is dynamic force spectroscopy (DFS). Under DFS, the bonds of a molecular system are subjected to controlled stretching or torsional force until the bonds break. The resulting data are arranged as a plot of the rupture force versus the loading rate to produce a force spectra, which has for the past decade been analyzed using the irreversible single-bond model.

“Under the irreversible single-bond model, force spectra are expected to form straight lines, at least for the irreversible rupture of a single inter-molecular bond over a single energy barrier,” DeYoreo says. “Surprisingly, however, as more DFS data were collected on a variety of different molecular systems, a peculiar commonality began to emerge: Most showed nonlinear trends in the force spectra.” 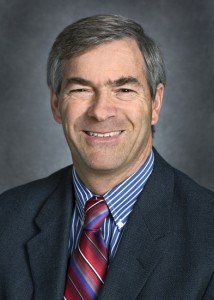 Jim DeYoreo of Berkeley Lab’s Molecular Foundry helped lead the development of a model that provides a comprehensive description of the way in which molecular bonds form and rupture. (Photo by Roy Kaltschmidt)

According to DeYoreo and his colleagues, the irreversible single-bond model makes the erroneous assumption that, under laboratory conditions, once a molecular bond is ruptured it is never restored. This leads to further erroneous assumptions that result in inaccurate predictions about the extent to which two molecules will bind. Such predictions are important across a broad range of fields to both understand interactions in natural systems and to design synthetic analogues.

“For example, we would like to be able to predict with reasonable certainty whether a proposed synthetic polymer can be used to outcompete an antibody for a biosensing assay, or whether a specific type of virus particles will adsorb to aerosol droplets,” DeYoreo says.

The new model created by DeYoreo and his colleagues avoids the erroneous assumptions of the irreversible single-bond model to obtain predictions that are more compatible with experimental results. The model is unique in its ability to explain the rupturing of molecular bonds in terms of a single energy barrier rather than multiple-energy barriers. This yields critical information on the binding free energy of a molecular system.

“If one wants to understand the behavior of interfaces, whether between two molecules or between two materials, the most important number to know is the binding free energy,” DeYoreo says. “This has been a difficult number to come by, but we’ve shown that with our model it can be easily extracted from DFS measurements.”

The collaborators successfully tested their model using data from 10 different molecular systems. These tests showed that the model provides a comprehensive description of force spectra for a diverse suite of bonds over experimentally relevant loading rates. The model eliminates the inconsistencies of the irreversible single-bond model and provides ready access to both kinetic and thermodynamic information about molecular and material interactions.

“We’re now using our methodology to determine how biomolecules associated with the formation of hard materials interact with the surfaces of such materials to direct their rates of growth and their architecture,” DeYoreo says.